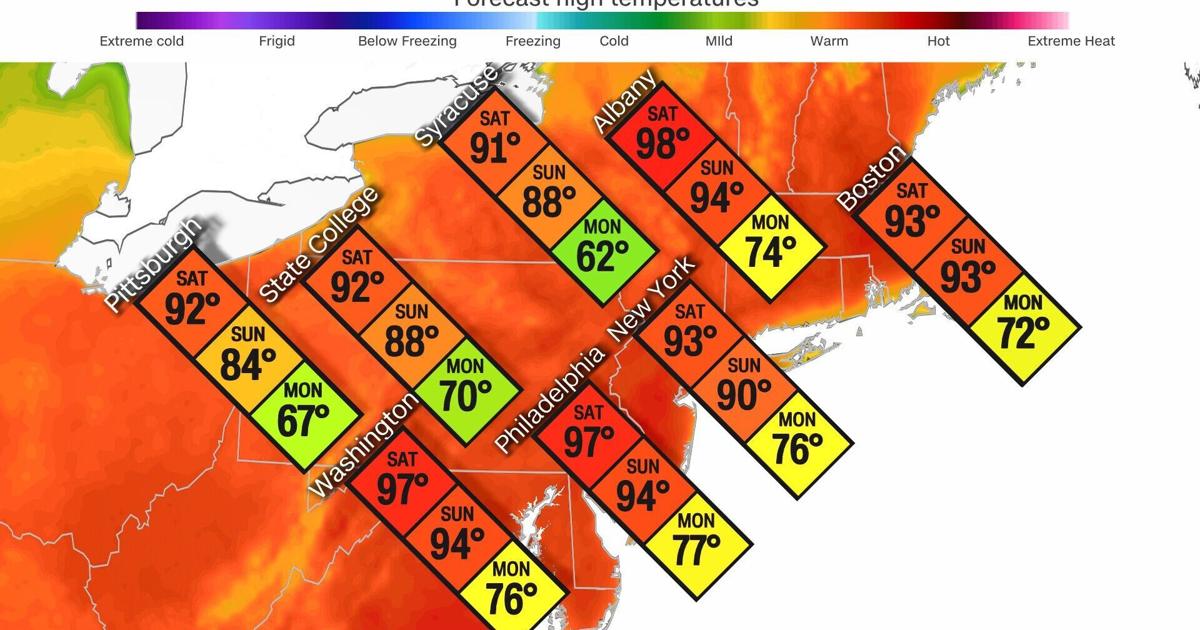 Although Memorial Day weekend — the unofficial start of summer — is still more than a week away, nearly 60% of Americans, or almost 200 million people, will feel 90-degree heat over the next few days.

Record heat, which has been brewing across the drought-stricken Plains and parts of Texas, is moving east and hundreds of temperature records could fall in its path.

From Thursday to Sunday, as many as 130 record high temperatures are forecast to be tied or broken in parts of 20 states. “Pretty much every day from Friday to Sunday, we’re looking at rivaling daily record temperatures, running 15 to 20 degrees above May normals,” said Aaron Swiggett, a meteorologist at the National Weather Service in Raleigh, North Carolina.

Highs will range from 94 to 96 degrees all weekend in Raleigh, challenging records that have been standing for nearly a century. The excessive heat is in part thanks to the broad weather pattern across the nation. Over the past several days, the upper-level winds in the atmosphere, known as the jet stream, have been zonal — or more of a west-to-east flow.

As this pattern has persisted, a massive dome of high pressure has gained steam, allowing for unseasonably warm weather to build and expand out of the Plains and into the southern and eastern half of the nation.

By Friday afternoon, high temperatures in cities including Cleveland, Washington, Nashville, Tennessee, and Richmond, Virginia, will range between 90 and 95 degrees — all warm enough to challenge daily records, that for some have been standing since the 1930s.

The 90-degree heat will be widespread and affect millions, but parts of the South could even see its first triple-digit temperatures of the season.

Columbia, South Carolina, has already experienced three 90-degree days this month, but Thursday and Friday could usher in the city’s first 100-degree days of 2022. The average high in Columbia is only 84 this time of year.

Atlanta had been able to avoid 90-degree heat so far this season, but with highs running as much 15 degrees above average, its luck came to an end on Thursday. Atlanta’s first 90-degree day of the year typically lands on July 3. However, highs are forecast to reach 90-plus through Saturday.

“This is definitely pretty early for this type of heat,” Swiggett told CNN. “We would normally see these temperatures in the dead of summer.”

With the first truly significant heatwave to impact the eastern US this year, he cautioned against outdoor activities this weekend. “The importance of shade is really significant. We forecast temperatures for the shade, so it’s going to feel even worse in the sun,” Swiggett said.

Hottest air of the year reaches the Northeast

By Saturday and Sunday, the 90s will reach the Northeast and parts of New England.

The average high in Central Park is only 72 this time of year. The forecast on Saturday is 93 degrees. The last time the city recorded a 90-degree day was way back on August 27.

In Philadelphia, a high of 97 is forecast on Saturday, a mark that would best the previous record of 95 degrees standing since 1934.

If you’re looking for relief, you won’t find it in New England either.

“With high pressure building south of our area, we’re expecting both heat and humidity to build for the weekend,” said Joe Pollina, a weather service meteorologist in Upton, New York.

Records are possible in Hartford, Connecticut; Manchester, New Hampshire, and Burlington, Vermont, where highs are all forecast to reach between 92 and 95 degrees. These will challenge records that for some locations have been standing for more than 110 years.

In Boston, the average high temperature this time of year is 68 degrees, but the city is forecasting highs between 90 and 93 this weekend.

“You’ve got to take it easy, it’s not like the mid-summer heat where we’ve all had a little bit of time to acclimate,” Matthew Belk, a weather service meteorologist in Boston, told CNN.

“Heat is a very sneaky killer,” Chesnea Skeen, a meteorlogist at the weather service in Sterling, Virginia, told CNN. “A lot of the public don’t see it as a huge threat but it’s actually one of the top killers, as extreme weather goes. With it being an early season heat event, take it seriously, stay hydrated and stay out of the sun.”

Fortunately, for most, the heat won’t linger beyond the weekend.

Late Sunday afternoon, a potent cool front will approach from the west, increasing the cloud cover and the potential for a few thunderstorms.

As the cooler air filters in on the backside of the front, Monday will bring cooler temperatures in cities including New York, Philadelphia, Washington and Atlanta — where highs are forecast to be in the 70s.