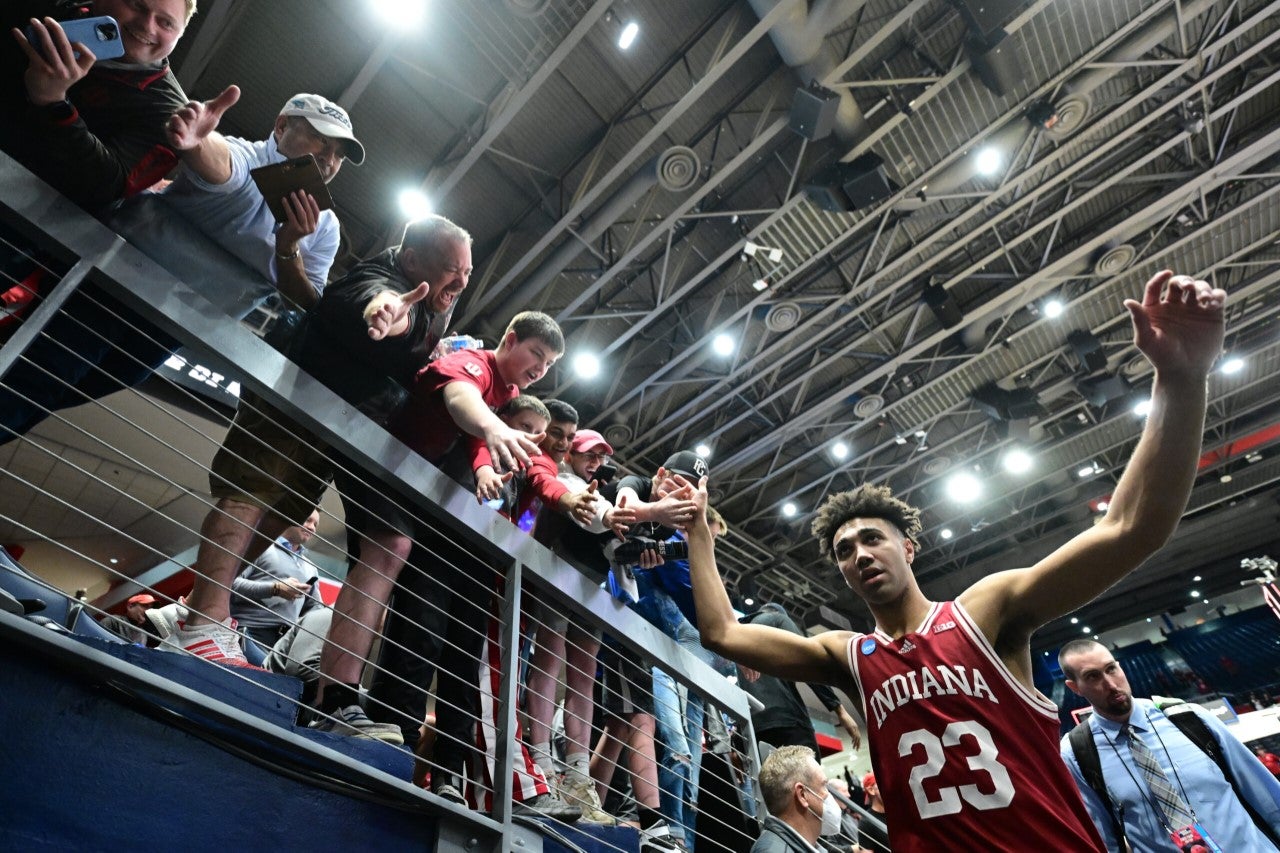 INDIANAPOLIS (WISH) — After dabbling in the NBA draft process for a second consecutive spring, Indiana’s All-Big Ten first-team forward Trayce Jackson-Davis announced on social media that he is returning to the Hoosiers next season for a fourth year in Bloomington.

Jackson-Davis missed this past weekend’s NBA draft combine due to a positive COVID-19 test. According to multiple projections, the former Center Grove High School star was expected to be a second-round draft pick at next month’s draft.

This past March, Jackson-Davis took his game to a new level.

Despite starting Woodson’s first season 16-5 overall and 7-4 in Big Ten play, the Hoosiers arrived in Indianapolis for the 2022 Big Ten Tournament in ‘must-win’ mode yet again.

A 2-7 finish to the regular season left Indiana on the outside of the projected 68-team NCAA Tournament field, matched up against a Michigan team riding a nine-game win streak in the heated series.

Everything Jackson-Davis envisioned during that initial meeting with Woodson was in jeopardy with just over 13 minutes left in the game and trailing by 17 points to the Wolverines.

And then it happened.

Sparked by Jackson-Davis’ 24-point, second-half dominance over Wolverines’ star Hunter Dickinson in the post, the Hoosiers pulled off the second-largest comeback in Big Ten Tournament history and moved squarely back onto the NCAA Tournament bubble.

The next day, top-seed Illinois never found its outside shooting and a second-consecutive stellar offensive effort from Jackson-Davis, who had 21 points, spurred an upset win over the Illini.

For Hoosier fans, this was the most enjoyable stretch of March basketball in six years. Indiana was officially heading back to the NCAA Tournament for the first time since 2016.

“There’s been a lot of talk, especially the last two years, of me not showing up at the end of the season, so I’m trying to change that narrative,” Jackson-Davis said following Indiana’s win over Illinois. “I think that team is, honestly, the team that got me in the slump that I’ve been in the last month. And, when we played them on February 5, it took a lot of my confidence away. So, Illinois was a bully today, and I think we took care of that problem. I’m just going to keep playing the way that I am and then we’ll go from there.”

Again, instead of wilting, Indiana punched back.

A bus ride back to campus set the stage for Selection Sunday and yet another twist for the program.

Not only was Indiana placed in one of the First Four play-in games in Dayton against fellow No. 12 seed Wyoming, a win meant traveling to Portland for the Round of 64.

A poor shooting game from both sides gave way to the best player on the floor in Dayton. Jackson-Davis, with 29 points, ensured Indiana’s March wasn’t done yet.

You know what happened next. The NCAA-provided plane was way too small, the Hoosiers were late to Portland, and less than 36 hours later, No. 5 seed Saint Mary’s erased any question regarding who the best team was moving forward in March.

Following the loss, Jackson-Davis didn’t put a timetable on the decision he now faced for a second time. Now, two months later Hoosiers fans have their answer.