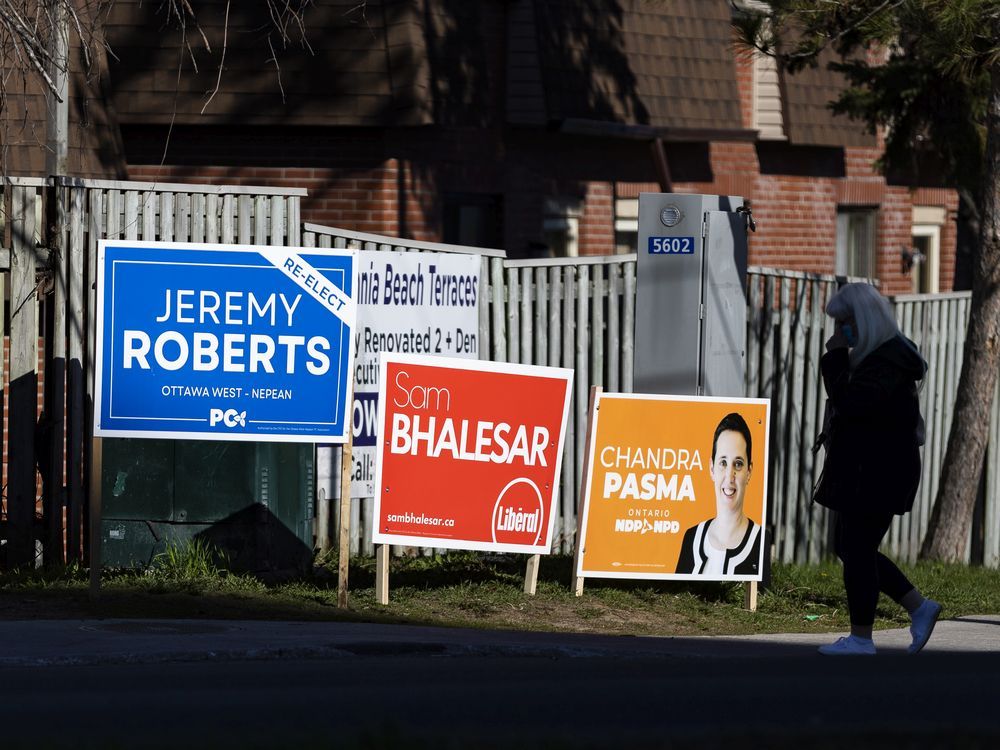 Ottawa West–Nepean has scored a spot on two leaders’ itineraries in as many days, cementing its status as a riding to watch with two weeks to go until election night.

Ontario Liberal Leader Steven Del Duca selected the Villa Marconi long-term care home near Baseline and Merivale as the base for a meet-and-greet Thursday evening.

The party’s Ottawa West–Nepean candidate Sam Bhalesar is looking to reclaim the seat the Liberals held for 15 years under Bob Chiarelli and Jim Watson before him.

The Liberal hold on the riding was broken in dramatic fashion in 2018. Progressive Conservative Jeremy Roberts won four years at Queen’s Park by a margin of 175 votes. Second place was claimed not by political veteran Chiarelli, but by Ontario NDP candidate Chandra Pasma.

Both Roberts and Pasma are running again. While Bhalesar is the newcomer to the race, she brings political savvy to her bid to represent Ottawa West–Nepean.

An advisor for the federal government on leave for the campaign, Bhalesar has served as secretary of the federal Liberal party, vice-president of the Carleton riding association and in various capacities on the party’s women’s commission. Bhalesar also has volunteer experience – and the connections that come with it – at The Ottawa Hospital, CHEO and a number of national organizations, including the Canadian Cancer Society and Network of Indian Professionals.

Riding residents have shown a continued willingness to elect a Liberal, at least at the federal level. Last fall, they voted overwhelmingly to return MP Anita Vandenbeld to her seat on Parliament Hill.

But election observers know that what voters want federally doesn’t always match up with provincial preferences, and the NDP are clearly bullish on Pasma’s prospects. In an interview earlier in the campaign, Ottawa Centre NDP incumbent Joel Harden pointed to Ottawa West-Nepean as the local riding he considered most likely to see an NDP breakthrough (he was the sole New Democrat elected in Ottawa in 2018).

Pasma, a researcher with the Canadian Union of Public Employees, has further raised her profile in the years since the last general election. She’s been featured in news stories for her work on ambulance shortages and contract faculty at universities and has spoken publicly about her family’s struggle with long COVID.

NDP Leader Andrea Horwath made two stops in Ottawa West–Nepean on Wednesday (her last campaign day before testing positive for COVID-19, forcing her leader’s tour to go virtual while she isolates).

She joined Pasma in the riding’s Fisher Heights community for a backyard press conference about the NDP’s pharmacare plan and later stopped at the candidate’s campaign office. In a statement Thursday, Pasma said she and her team will be monitoring for COVID-19 symptoms and have rapid tests available, but they’re in good health so far and always wear masks while canvassing.

The man standing between the Liberal and NDP hopes in Ottawa West-Nepean doesn’t seem likely to give either an easy victory. For a first-time MPP, Roberts has generated a good deal of attention over the past four years.

His office has been a popular picketing destination for those opposing various PC government policies, but he’s also made headlines for his efforts to support people with autism and their families, even as his government’s handling of the file was criticized.

In 2020, he secured the passage of a private members’ bill moving the province toward ending the twice-yearly time change. He saw provincial budget approval for a complex care facility at CHEO he had long advocated for. And in an op-ed in this newspaper in March, Roberts came out as gay. He wrote about his long-held fear that revealing this part of his identity would jeopardize his career, and his desire to cast that aside and serve as an example for others.

Right-leaning voters also have one fewer option in Ottawa West–Nepean than they did when the campaign started. The flag-bearer for right-of-centre New Blue party has dropped out of the race, after he was informed by the Canadian Forces that he was in violation of military rules on political activity.