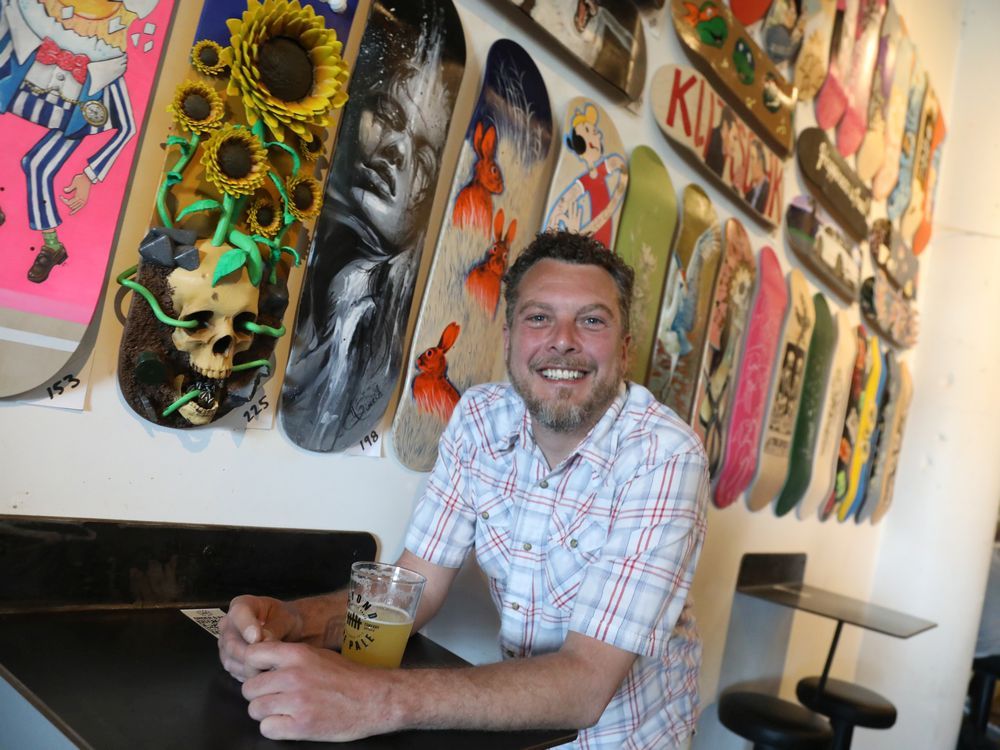 It’s amazing what an artist can do with a skateboard deck.

To see for yourself, check out this year’s All Hands on Deck show, a fundraising exhibit and auction of decorated decks at Beyond The Pale Brewing Company. Of the more than 200 decks secured to the walls of the brewery, a new one stands out every time you look at them. Each one was designed by an Ottawa-area artist.

My crew had a great time picking out our favourites during a recent gathering at the City Centre brewery.

Some liked the one emblazoned with an image of the four-legged robot vehicle from Star Wars. Others were drawn to one that portrays The Tragically Hip’s Gord Downie in his final show. I liked the ones bursting with flowers and colour while others gravitated to the ones rendered in elegant shades of black, white and gray. Cartoons, memes, TV stars, landscapes and more festoon the wheel-less planks of wood.

But, the one that knocked us all out was barely recognizable as a skateboard. It was off to the side, not on the wall but instead resting on a shelf near the bar, depicting a cozy room that seems to invite viewers to take a seat and listen to records. There’s a working lamp in the middle, a baby-blue rotary phone on a low table and a pair of red sneakers cast off on the shag rug.

The thing is, it’s miniature, a tiny, realistic replica of a 1970s rec room that uses the skateboard deck as a wall. The attention to detail is truly remarkable, with posters on the wall, a shelf full of stuffed animals, books and board games, and even some half-eaten pizza slices within arm’s reach of the chair.

According to the show’s curator, Daniel Martelock, it’s the creation of the anonymous Ottawa artist known as SAM, or StreetArtMiniature on Instagram, the same person who’s been hiding miniature clay sculptures around town since 2016, stashing them in the cracks and crevices of the city. In one interview, she revealed herself as a woman who lives in Nepean working hard to make the streets of Ottawa “a little more fun.”

In the new show, her piece is No. 227, and in Martelock’s mind, it’s right up there with No. 226. One of his faves, it shows a scene from the Mario Kart video game handmade in the unlikeliest of art forms, crochet.

Each artist in the show purchased a locally sourced deck (or two, max) from the brewery at cost ($20) and had about six weeks to do their thing. The artists range from internationally known names to emerging creators still in their teens.

In all, “this year’s work is phenomenal,” Martelock says of the batch of decks in the fourth annual show. “The creativity, yes, but also the level of artistic skill is definitely unbelievable. We get a level of work that blows my mind. I think people really pushed it this year because they know about this show and enjoy it.”

With 228 decks on display, it’s also the biggest show Martelock has ever mounted on the brewery’s walls. In fact, he believes it’s probably the biggest show of skateboard decks in the world, a boast he was keen to have verified by the folks at Guinness World Records, but they required more lead time. “It’s definitely the largest in Canada,” Martelock said.

In addition to curating, hanging and photographing the decks, Martelock is a freelance artist who creates murals and other paintings for businesses and individuals. One of his decks in the show sports a figure that’s become a signature for him — a chickadee with an army helmet (No. 169).

He’s been painting his bird-army soldiers for years, ever since he noticed that little birds like chickadees and sparrows tend to stick together. “They always hang out together, males and females mixed,” he said. “They work with each other and they help each other, and they don’t leave in the winter.”

Adding a helmet with a medic symbol underscores the birds’ helpful nature, turning the cute image into a model for a community-minded member of a caring society. You can see some of Martelock’s birds around town, indoors and out, including a couple that are currently hanging at Hintonburg Public House.

Back at the brewery, the auction goes live on May 20 at btpshop.ca, and runs until the grand finale party on May 29. While money raised usually goes to local skateboarding groups, this year it will be donated to the Red Cross campaign in Ukraine.