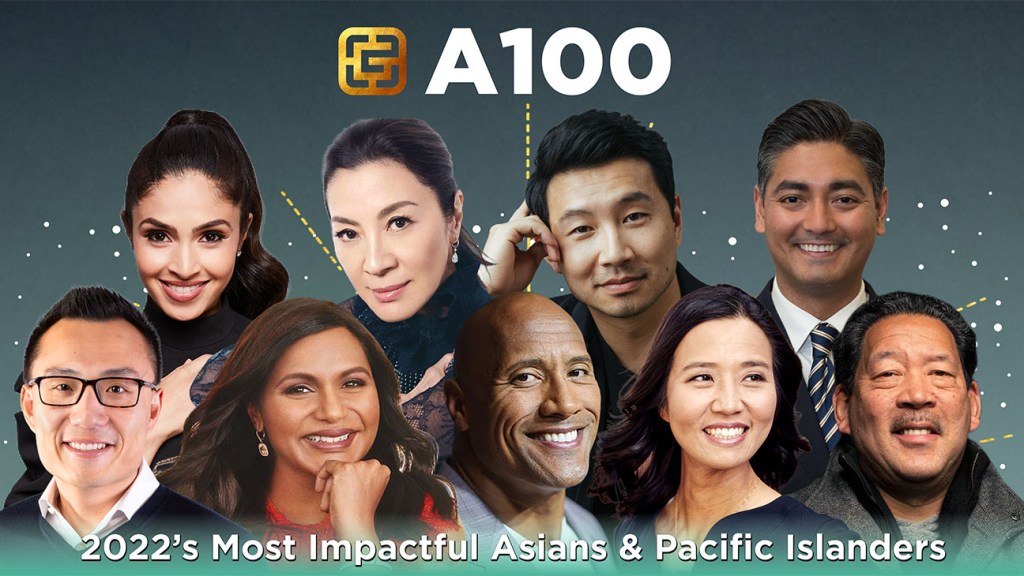 It’s the beginning of Asian Pacific American Heritage Month, which means it’s time for Gold House to unveil this year’s A100, the API leadership coalition’s fifth annual list of the most influential Asians and Pacific Islanders in American society and culture.

In addition to the A100, this year’s Hall of Fame inductees — who must have appeared on at least two prior lists — include Kpop superstars Blackpink, Gemma Chan, H.E.R. and Kelly Marie Tran. Gold House is also recognizing three individuals from the world of entertainment as Legends (who need no introduction): Michelle Yeoh, Dwayne Johnson and Mindy Kaling.

“Though the news cycle may have moved on, it’s clear to anyone following that the challenges facing the AAPI community remain,” A100 judge Daniel Dae Kim said in a statement. “It’s vitally important that we continue to reclaim our narrative by celebrating and honoring the achievements of those of us making a positive impact on our world today.”

This year’s A100, A1s, Hall of Famers and Legends will be feted in person at Gold House’s inaugural Gold Gala on May 21 in downtown Los Angeles. Presented in collaboration with Meta, the event — themed “The New Gold Age” — will also mark the launch of a campaign with Procter & Gamble to expand public understanding of what it means to belong in America, starting with support for proper pronunciation of the honorees’ names in their respective API languages.

In turn, this year’s A100 announcement includes support for We Can Do This, the U.S. Department of Health and Human Services’ COVID-19 public education campaign. Gold House is amplifying awareness of vaccines and boosters among API communities that have historically been underserved because of language barriers or lack of access to health care.