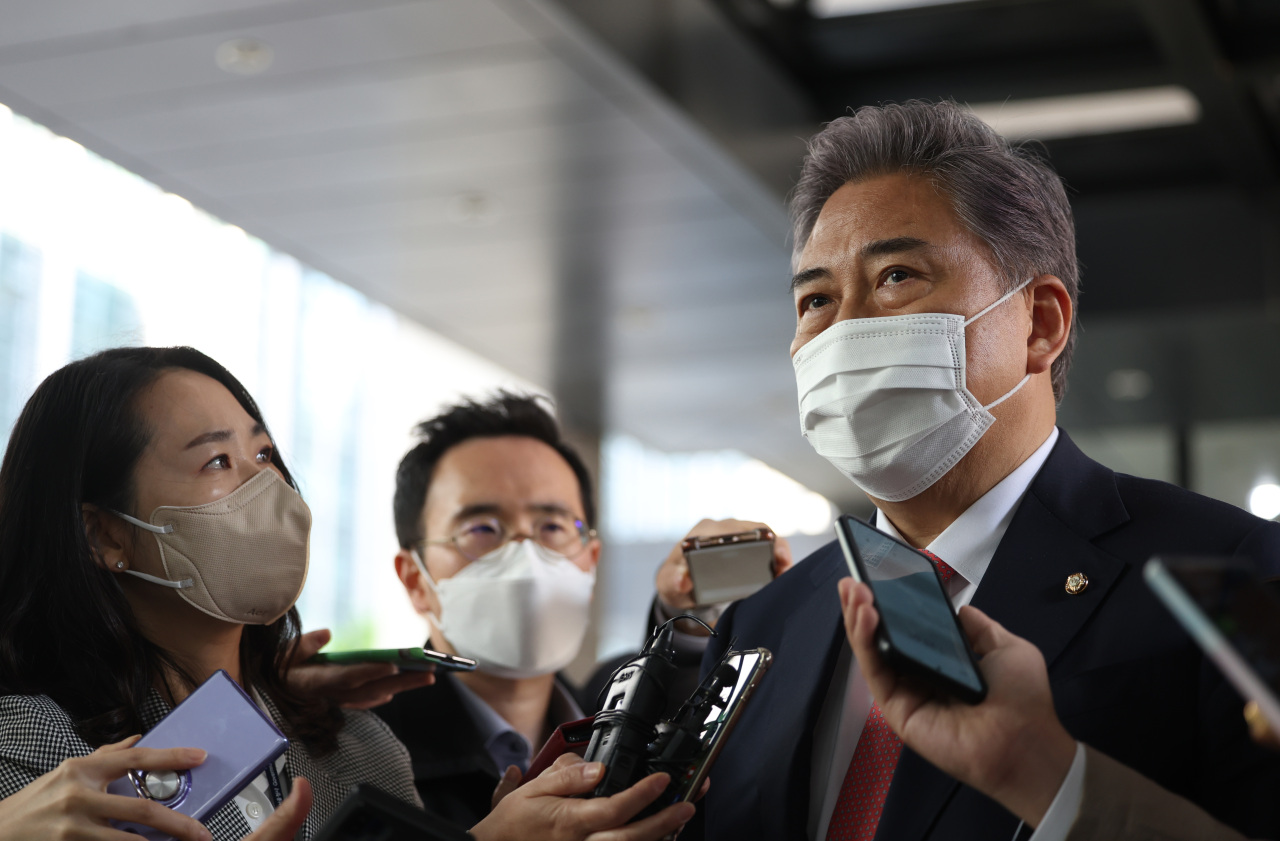 Foreign Minister nominee Park Jin has said South Korea should not discuss issues of undermining national security and sovereignty with China, expressing opposition to the Moon Jae-in government’s China policy including its commitment to the “Three Noes.”

Park clarified the dissimilarities between the incoming Yoon Suk-yeol government’s approach to China and its predecessor in a written statement presented to South Korea’s National Assembly on Saturday.

The nominee underscored the necessity for South Korea to firmly state its position on the issues of sovereignty, identity and major national interests and defend them against China in his answers submitted in the run-up to his confirmation hearing scheduled for Monday.

Park went on to say that the Moon government’s China policy “has not been up to scratch” in that context, pointing to its “Three Noes” policy as a bad example.

The “Three Noes” stems from a diplomatic clash in 2017 over the deployment of the Terminal High Altitude Area Defense (THAAD) battery.

The Moon government promised China that the country would not deploy additional THAAD batteries, integrate into the US-led regional missile defense system, nor participate in trilateral military cooperation between South Korea, the US and Japan.

The nominee underlined that the “issues that constrain the country’s security and sovereignty cannot be the agenda for discussion” with China, suggesting that the Yoon government will take the issues off the table.

But Park took note of the significance of China as South Korea’s biggest trading partner and a major stakeholder in resolving North Korea’s nuclear issues.

The nominee elucidated that the Yoon government seeks to push forward China policy “based on mutual respect and cooperation, national interest and principles.” The incoming government pursues strengthening strategic communication to that end, he said.

President-elect Yoon has stood against his predecessor’s policy of “strategic ambiguity” vis-a-vis the growing US-China rivalry. Yoon has opted to reinforce the South Korea-US alliance. But at the same time, he has recognized the need to maintain and develop cooperation with China in light of trade volume and China’s leverage over North Korea.

The nominee said South Korea “needs to actively participate in international efforts to maintain peace and stability as well as freedom of navigation and overflight in the South China Sea.”

“It is necessary for us to play a more active role in line with the new government’s vision of becoming a ‘global pivotal state that contributes to (advancing) freedom, peace and prosperity’ in a situation where the acts of undermining the rules-based multilateral order in the region and escalating tensions in the South China Sea have recently continued.”

Park cited China’s Coast Guard law, which passed in January 2021 and allows the authorities to use weapons to “stop the violation and eliminate the danger” at sea by foreign individuals and entities, as an example.

Also, China revised its Maritime Traffic Safety Law, which took effect in September 2021. The law requires advance notice from foreign submarines, nuclear-powered vessels, and “other vessels that may endanger the maritime traffic safety of China” before entering and exiting the Chinese “territorial sea.”

In addition, Park pointed out that the “security cooperation among South Korea, the US and Japan is more important than ever given that North Korea’s nuclear and missile threat has recently heightened.”

The move is in line with the Biden administration’s Indo-Pacific engagement strategy, which aims to align and coordinate the three countries’ regional strategies and handle North Korea issues through trilateral channels.

Participation in Quad working groups
The foreign minister nominee also dispelled the concern that the Yoon government’s endorsement of joining the Quadrilateral Security Dialogue (Quad) will lead to friction with China. The Quad is a strategic security dialogue between Australia, India, Japan, and the US.

Yoon has pledged to participate in working groups on COVID-19 vaccines, climate change and emerging technology under the auspices of the Quad to expand cooperation with members and other countries concerned. Then, he plans to carefully examine whether to join the Quad as a member while evaluating the outcomes of the multilateral coordination.

Park also said the South Korea-US Policy Consultation Delegation led by him had an in-depth discussion with the US on ways to enhance cooperation with countries in the Indo-Pacific region through various channels including the Quad in a separate statement submitted to the National Assembly on Friday.

Park underscored that Yoon and Xi “agreed to advance relations between South Korea and China in the spirit of mutual respect and cooperation” during their phone conversation on March 25.

Yoon has not sent a special delegation to China although his policy consultation delegations traveled to the US and Japan in April.

But Liu Xiaoming, special representative of the Chinese government on Korean Peninsula affairs, is set to travel to South Korea this week for the first time since his appointment in April 2021. The Chinese top nuclear envoy will have a first face-to-face meeting with his South Korean counterpart Noh Kyu-duk on Tuesday.