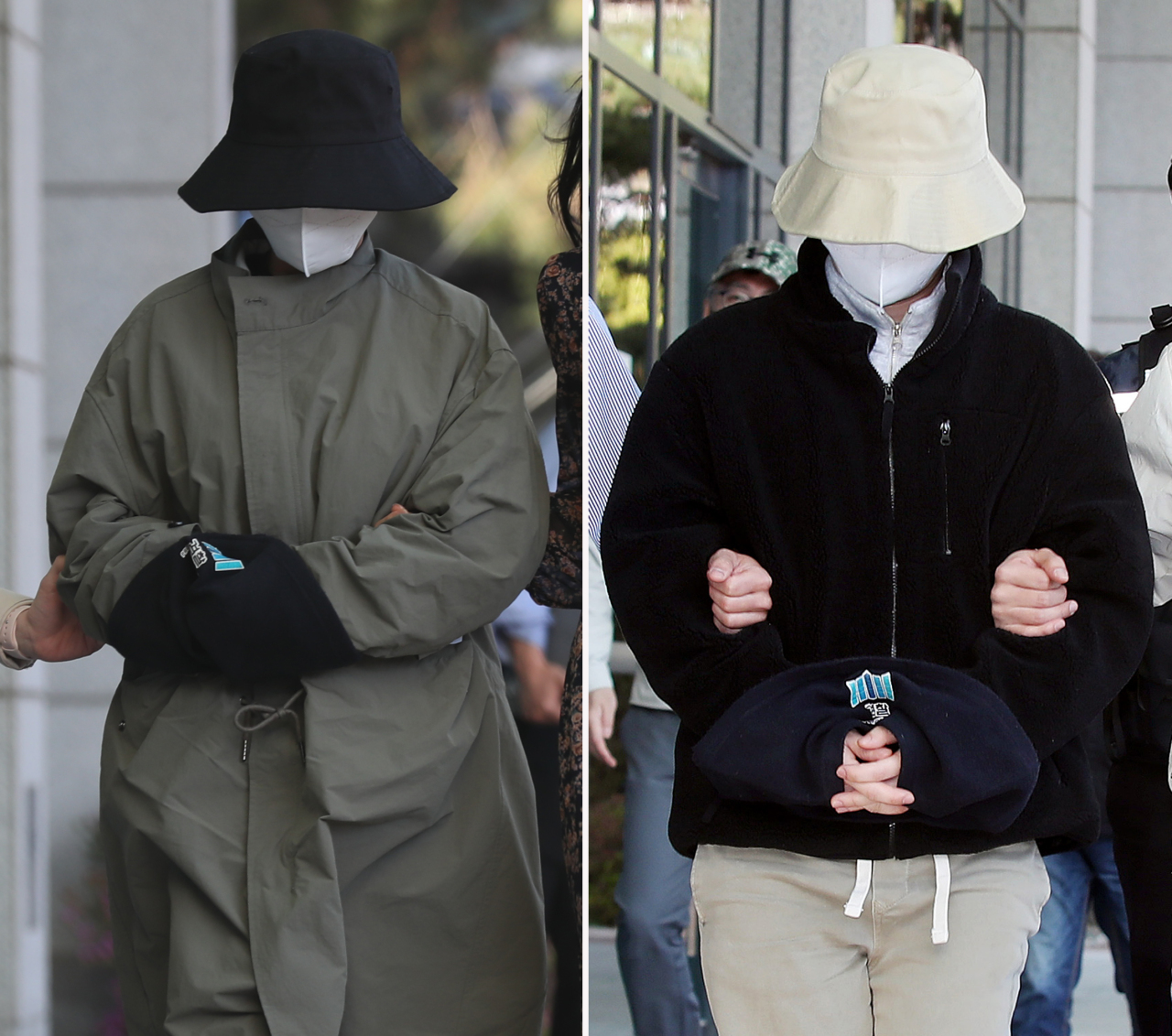 A murder case is gripping South Korea with a curious blend of fatal attraction, gaslighting and insurance fraud, but law enforcement authorities face a tough fight to prove the crime.

It is the story of a man named Yoon Sang-yeop, who drowned in the summer of 2019 during a trip to a valley with his wife Lee Eun-hae and her friends, just four hours before his life insurance expired.

How it came to light

Lee, 31, is now under arrest together with Cho Hyun-soo, 30, with whom she was in an extramarital relationship for several years, as suspects in what is not a typical murder case.

Lee is accused of murder by inaction. She is suspected of goading her husband, who couldn’t swim and was apparently afraid of water, into diving and letting him drown.

Ironically, it was Lee’s own doing that initiated her downfall.

In late 2019, months after Yoon died, the woman approached the production team of SBS’ investigative TV program “Unanswered Questions,” saying that she wanted to report a local life insurance company which was unfairly refusing to pay the benefits due from her husband’s untimely death, worth some 800 million won.

She claimed that even though his drowning had been determined as an accident by police in October, the insurance company rejected the payment, accusing her of insurance fraud.

But things didn’t play out as Lee had hoped.

The SBS team, seeking to verify her claims, soon discovered a series of questionable aspects to the case.

In the episode, Yoon’s bereaved family said he started to have financial difficulties after marrying Lee.

The show reported that Yoon, despite working as a biomolecular engineer at a major company, even had to borrow 3,000 won ($2.30) for instant noodles and a bottle of water from a friend.

He told his family he met Lee at work, but the family learned at the funeral that Lee had never worked at the firm and none of his colleagues knew how they met.

It was also at the funeral that Yoon’s family learned that Lee had been married before and had a 10-year-old daughter, and that Yoon had adopted her without telling any of them. None of Lee’s family, including the girl, attended the funeral.

The show also revealed that that one of the six people who accompanied Yoon on the trip was Lee’s longtime lover, Cho.

After the TV show shed light on the circumstances of Yoon‘s death, investigative authorities started to look anew at the case as a potential crime at the request of his bereaved family and friends. Lee and Cho were questioned as suspects on Dec. 31. Their disappearance following the interrogation led to a nationwide manhunt, which put the case back in the media spotlight.

The couple were eventually arrested on April 16.

It appears that Yoon had been abused by his wife for years.

It was Yoon’s first marriage, but Lee’s third. Almost fourth, in fact. In 2015, while dating Yoon, Lee agreed to marry another man. But the groom’s family cancelled their legal union right after their wedding ceremony, claiming that Lee had acted fraudulently.

Lee and Yoon, despite legally registering the marriage, never had a ceremony, and did not live together, either.

Although Yoon had rented a home worth 140 million won, he continued to live at his semi-basement home in Suwon and Lee at her home in Incheon, letting her friends live in the house Yoon prepared for their life together.

Investigators had found that Yoon was swimming in debt, despite a salary of 64 million won ($50,600) a year, more than double the average wage.

In 2018, a year after marrying Lee, he filed for debt rehabilitation proceedings, with 135 million won in debt. It is unclear how much of his financial struggles are connected to Lee, but Lee had told the “Unanswered Questions” team that her family received financial help from her husband, and that she and Yoon would frequently go on trips because they “didn’t really think to save up.”

The bank records show that a total of 36 million won had been transferred from Yoon’s account to that of Lee’s friend in the span of two years, and it was reported by local media that Yoon at one point tried in vain to sell his organs via an illegal broker.

Months after their marriage, Lee subscribed to multiple life insurance products, designating Yoon as the nominee, and urged him to do the same. On this, local insurance experts later said nomination — the act of specifically naming the recipient of insurance benefits which would otherwise go to legal heirs if the policyholder dies — is uncommon in Korea.
Police investigators suspect that Yoon was psychologically manipulated by his wife, possibly in a form of abuse known as gaslighting in which the abuser misleads the victim into false perception of the reality.

In a letter written to Yoon, Lee wrote in what could be seen as a joke or not, “Hello. This is your master.”

Police uncovered a text message sent by Yoon in January 2019 to Cho, saying that he “just wanted respect from Eun-hae (Lee)” and that it was “so hard being looked down on and verbally abused” by her.

It is unclear whether Yoon was aware of Lee’s affair with Cho.

In a recorded phone conversation between Lee and Yoon, revealed by local media earlier this week, Yoon complains to Lee that she had abused him while drinking with their acquaintances, such as by pulling his hair.

“When I get drunk, I tend to mistreat people who I feel the closest to. It’s not that I act that way because I don’t respect you, it’s just like that,” She was recorded as telling Yoon in response.

Why did he jump?

Still, many find it difficult to understand just how a well-educated man with a decent career could trap himself in such a toxic relationship and eventually dive into deep water, knowing full well that he cannot swim.

In video clips of the day of Yoon’s passing, disclosed later, he is shown playing only around the shallows with a pool float, with some men teasing him by attempting to tip him off or dragging him into deeper water and Yoon encouraging them. Lee at one point is seen covering his ears with his hands as if in agony.

Lee also submitted her own video recordings of the day on the phone, which however ends 21 seconds before the fatal dive. This video appears to have been edited, experts said.

One of the six who went on the trip to the valley river with Yoon was a woman surnamed Choi, who described the trip in an interview with the SBS team.

She was told by Lee that the deceased was her “close friend” and she never suspected that the two were a married couple, because Lee was openly affectionate with her extramarital lover Cho.

As for the dive, Choi said Yoon appeared to have been motivated by Lee saying, “all the men are diving.”

In her defense, Lee has claimed that they never saw Yoon struggle or heard him after the dive, but Choi said she heard an “Ugh!” sound with what appeared to be a struggle. She said she saw Cho swim toward Yoon, and that she accompanied Lee leaving to fetch the pool float, a trip which took about two or three minutes.

Choi said that she thought it was odd that the life jacket that Lee had put on when she was goading Yoon on to dive had disappeared, and that Cho — who was swimming toward Yoon when the women had left for the pool float — was somehow further away from him by the time they came back.

The police, in its report on the case referred to the prosecution, noted that it appears that Yoon’s decision-making had been completely dominated by Lee, which led to him take the dive, knowing he might die.

Evidence shows Yoon had suspicions that his wife wanted him dead. Witness testimonies and recovered phone conservations have Yoon telling Lee “You pushed me.” This seems to refer to his fall into the water while fishing in May 2019, just a month before his death. He was rescued by an unidentified person who is not Lee.

“It appears that (Lee) had used the victim until his financial situation was at its worst. When he was of no more use (to Lee), she carried out the plan to get the insurance compensation,” according to the police report.

The authorities suspect that Lee attempted to kill Yoon at least twice in 2019 – the fishing accident in May, and by food poisoning with pufferfish toxin three months earlier.

Lee and Cho deny intending to kill Yoon and insist they did try to save him when he drowned.

The sensational nature of the case has also led to many rumors involving Lee. Among them, the premature deaths of two men Lee dated before — one by car accident and the other by drowning.

The police looked into the suspicions but could not establish a criminal case against Lee.

They said one of Lee’s boyfriends did drown in 2014 during their trip to Pattaya, Thailand. But no evidence of foul play has been found yet, and the victim’s family — not Lee — received the insurance payout.