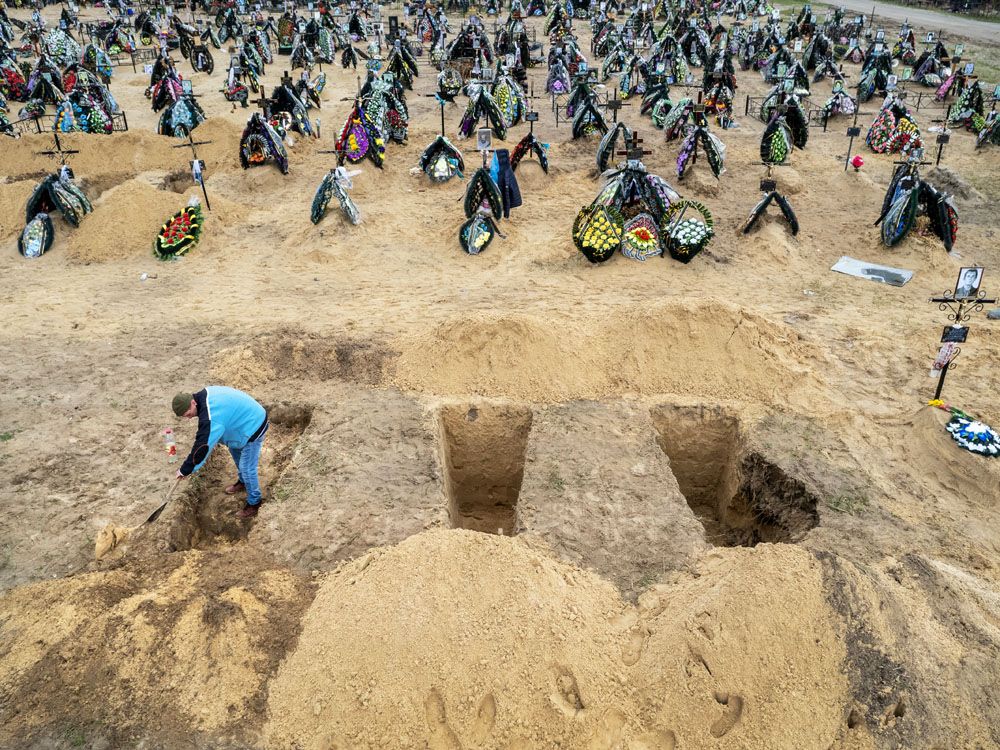 When Canada’s Parliament declared Russia’s war on Ukraine a genocide on Wednesday, Edmonton NDP member of Parliament Heather McPherson, who introduced the motion, alluded to “clear and ample evidence of systematic war crimes and crimes against humanity” in Russia.

Parliamentarians agreed, adopting, unanimously, the motion declaring Russia was committing acts of genocide. In her remarks, McPherson spoke of the killing of civilians, the transfer of children from Ukraine to Russia, torture, mental and physical harm, and rape, in making her brief case for the charge of genocide.

In recent weeks, world leaders — and experts — have become more willing to suggest that Russia’s invasion of Ukraine constitutes an act of genocide. U.S. President Joe Biden has said Russian President Vladimir Putin is “trying to wipe out even the idea of being Ukrainian” and Prime Minister Justin Trudeau said it’s “absolutely right” to use the term genocide.

All manner of atrocities have been documented in Ukraine, and the International Criminal Court has opened an investigation into possible war crimes. Human Rights Watch, earlier this month, noted “unspeakable, deliberate cruelty and violence against Ukrainian civilians,” including rape, summary execution and looting — actions, the group argues, that amount to war crimes.

Jonathan Leader Maynard, a genocide scholar at King’s College London, said he disagrees with none of what McPherson’s motion mentioned.

“The question is whether you can then move from that to saying, well, that’s genocide,” he said. “The 1948 Genocide Convention creates some quite specific burdens for what counts as genocide. It’s not just, like, lots of crimes against humanity.”

The National Post’s Tyler Dawson spoke to experts about what’s happening in Ukraine, what the word genocide means, and why using it can be controversial.

An act of genocide, according to the United Nations Convention on the Prevention and Punishment of the Crime of Genocide requires any or all of five specific actions “committed with intent to destroy, in whole or in part, a national, ethnical, racial or religious group, as such.”

The five actions are: killing members of that group, causing “serious bodily or mental harm” to group members, “inflicting … conditions of life calculated to bring about its physical destruction in whole or in part,” preventing births, and transferring children from one group to another.

“When people say that a genocide isn’t happening (or isn’t happening yet) I think it’s because they have the most extreme model in mind — that of the Holocaust,” said Francine Hirsch, a history professor at the University of Wisconsin-Madison, in an email to the National Post.

In other words, a genocide is “not just about extermination or murder,” said Hirsch. While we may think of brutal exterminations — the Rwandan genocide, or exterminations in Pol Pot’s Cambodia — the Uighur genocide in China is an example of a genocide that isn’t predicated upon mass exterminations, but rather actions like forced sterilizations or cultural destruction.

What is the evidence that Russia is committing genocide in Ukraine?

In Ukraine, Hirsch said, there are well-documented instances of targeted bombings of civilians, deportations and relocation of children, and intentional destruction of cultural and national monuments. They reach the threshold for genocide, she argued, but notes she’s making the case as a historian — not a lawyer.

“We are now seeing a deliberate and systematic plan to wipe out the Ukrainian nation,” Hirsch wrote. “We have heard reports that soldiers committing rape have told their victims that they want ‘to prevent them from having Ukrainian children.’”

Eugene Finkel, a genocide scholar at John Hopkins University, said we can “clearly see” Russian propaganda and officials talking “quite explicitly” about destroying the Ukrainian nation and nationality.

Does anybody argue it isn’t a genocide?

While some scholars are ready to say “genocide,” others have urged caution.

Indeed, there are serious debates among scholars over historical mass killings and whether they constitute actual genocides, even with decades of hindsight and research.

The Early Warning Project, which tracks and analyzes potential mass killings and atrocities, has issued no special alert in Ukraine. Nor has GenocideWatch, another group dedicated to predicting and preventing genocide, raised such an alarm.

“I’m not denying that genocide is necessarily occurring on the ground in Ukraine,” said Leader Maynard. “Do we have clear evidence? Can we be confident that genocide in the sense meant by the Genocide Convention is occurring in Ukraine? I don’t think so.”

What can be said with considerable confidence, Leader Maynard argued, is that there are “mass atrocities” occurring on the ground in Ukraine.

When people say genocide, what do they mean?

When people say genocide, they don’t always mean in the legal sense, which has a very high threshold. There may be the political impetus to use the term, too, such as showing solidarity with Ukraine, in the case of Canada’s Parliament, and pleading for international attention, as in the case of Ukraine’s President Volodymyr Zelenskyy.

Even if what’s happening in Ukraine doesn’t meet the high legal threshold of genocide — and it hasn’t been tested, so we simply don’t know — clearly some are willing to say that a genocide is occurring.

“The legal charge will hinge on proof that Vladimir Putin or other accused perpetrators intend to destroy Ukrainians as a group in whole or in part. International courts have set the bar very high for proving such intent,” wrote Philippe Sands, an international law expert, in The New York Times this week.

He suggested that the bar for a court to make a finding of genocide is “impossibly high.”

Were a court to find that no genocide had occurred in Ukraine, it would be heartbreaking for those affected, Sands argued, and enthusiastically seized upon by Russia’s sycophants.

Hirsch argued, alongside Finkel, in a recent piece in the Los Angeles Times, that this high bar makes it even more critical now to secure and preserve evidence of crimes.

“Genocide is a legal term — maybe we’re not there yet,” said Finkel in an interview. He asked, though, why this legal bar “should be guiding the discussion.”

In addition to having a specific group (Ukrainians) and acts carried out against them — the horrors of Bucha and Mariupol and elsewhere are thoroughly documented — there is also the question of intent; does Russia intend to commit genocide?

What evidence of intent to commit genocide is there?

Intent is key to establishing a finding of genocide. A mass killing without the intent to destroy a group, in whole or in part, wouldn’t fit the definition.

“We are well past the threshold for calling this a genocide. Russian leaders have been inciting genocide while the Russian military carries out mass atrocities,” said Hirsch.

Kyle Matthews, the executive director of the Montreal Institute for Genocide and Human Rights Studies (MIGS) at Concordia University, said Putin has argued Ukrainians aren’t a distinct people from Russians and the country is a vestigial piece of the Russian empire.

A piece published by RIA Novosti, a Russian state-owned news agency, argues “history has proved it impossible for Ukraine to exist as a nation-state,” and that elites — who the piece refers to as Banderites, referring to those who follow the footsteps of Stepan Bandera, a far-right, ultranationalist Ukrainian politician and Nazi collaborator — had to be “eliminated” because, according to a translation of the piece, “their re-education is impossible.”

“Usually, intent is difficult to prove. But in this case, it isn’t. Russian leaders have boldly announced their intent to wipe out the Ukrainian nation and eliminate the Ukrainian identity,” said Hirsch. “World leaders who use the term genocide are absolutely correct to do so—because it clarifies things and makes us understand what is at stake in this war for the Ukrainian people.”

There’s another point to consider, says Matthews, and it has to do with the Holodomor, the Ukrainian famine perpetrated by the Soviet Stalinist regime in 1932-33 that killed around four million Ukrainians: “If you look at Ukraine, does (it) have a history of being targeted for genocide by what is now the Russian state? And the answer is ‘Yes.’”