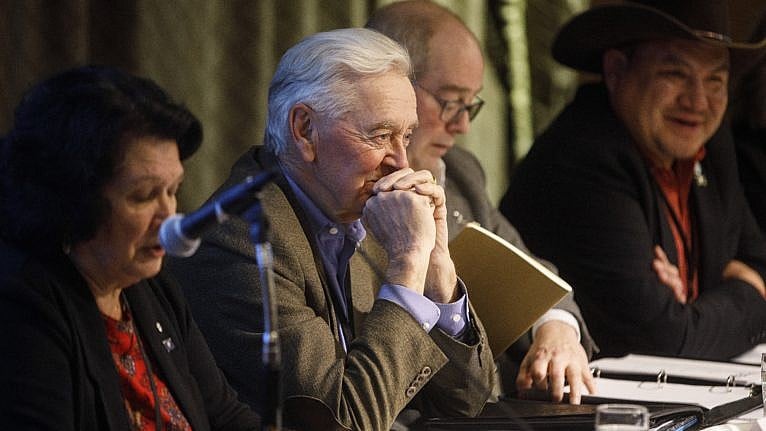 Preston Manning has written to CPC leadership contenders urging them to lay off personal attacks, CBC reports. He warns that attacks will “deepen divisions within the federal conservative camp” — which have been the “Achilles heel of the party for some time.”

Actual policy: In the Toronto Sun, Brian Lilley has a column looking at the policy proposals the contenders have rolled out, rather than their attacks.

Bank shots: CPC contender Pierre Poilievre, who has been quick to criticize his rivals, went after the Bank of Canada on Thursday, saying he would forbid it from issuing a digital currency, allow the auditor general to audit it and push for a review of its pandemic policies, CBC reports: “Justin Trudeau has threatened the Bank of Canada’s independence with a half-trillion dollars of deficits that required the central bank to print money and cause inflation. That’s ‘Justinflation.’ I will end it, by restoring central bank independence, mandating an independent audit of all the money printing and stopping the risky central bank digital currency.”

Pushing pipeline: Poilievre is continuing to seek support for a gas pipeline in Quebec although most parties there oppose it, La Presse reported Thursday (translation).

Ballingall specializes in shareable, anti-Liberal messaging that often takes on a mocking or outraged tone. His Canada Proud and Ontario Proud accounts have amassed hundreds of thousands of followers on Facebook and tens of thousands more on Twitter and Instagram.

Less debt: Peter MacKay has whittled down his debt from the 2020 leadership contest — to “less than $285,000,” CBC reports. MacKay, who placed second to Erin O’Toole, previously said he owed about $1 million.

Many of the major commitments in the 268-page document were previously announced by Premier Doug Ford’s government ahead of the looming election campaign, set to begin on May 4. There is not enough time to pass the budget before the Legislature dissolves next week, so the document serves as a costed platform for the PCs. The core themes of the record $198.6-billion fiscal plan include improving and expanding critical infrastructure, rebuilding the economy in the wake of COVID-19, helping families with the rising cost of living and ensuring the province is prepared for any further waves of the pandemic.

Ditching Mounties? An all-party committee of B.C. MLAs is calling on the province to replace the RCMP with a provincial police force, Global reports.

“The committee’s vision for policing and public safety includes: ensuring equitable access to police and public safety services with consistent oversight, governance, training, and policies,” the report reads. “It is a reflection of the challenges with governance and accountability with the current federal model.”

Dramatic: The reports recommends a number of dramatic changes, but members didn’t fuss too much over practical questions like cost, so it’s unclear what will happen to the report, writes Vaughan Palmer in the Vancouver Sun.

No exemption: The Canadian Armed Forces says over three-quarters of the more than 1,300 service members who applied for an exemption from the military’s COVID-19 vaccine requirement have had their requests denied, CP reports.

No charge: A woman who shouted “Freedom!” on the Tomb of the Unknown Soldier during the protest has expressed remorse and will not be charged, CTV reports.

Three-ring circus: Paul Wells consider the three venues for review of the invocation of the Emergencies Act, noting that nobody should worry too much about the terms of reference of the Rouleau inquiry.

In the public inquiry, which the government convened on the last possible day required by law, the terms of reference have raised eyebrows because the feds invite Justice Paul Rouleau to investigate every aspect of the truckers’ behaviour while showing little curiosity about the feds’ behaviour. (In fact, the best advice I could get when I called lawyers on Wednesday is that the Act itself is so clear that no terms-of-reference smoke-screen can have much effect. It requires any inquiry to examine both “the circumstances” and “the measures taken.”)