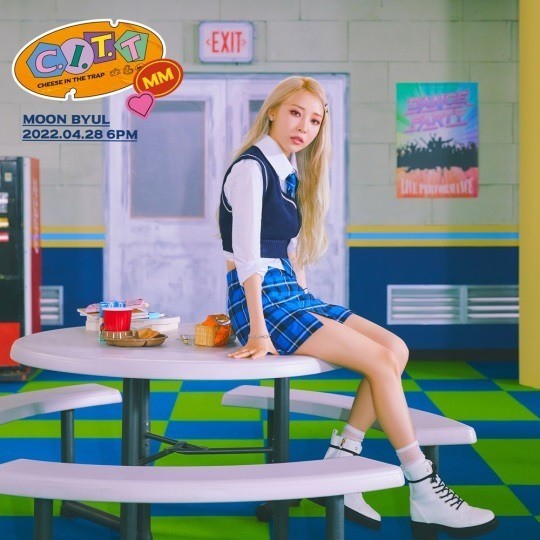 Moonbyul of Mamamoo talked about her solo single “Cheese In The Trap” that comes out on Thursday.

It has only been three months since her third solo EP “6equence” but she felt one week of promoting the main track “Lunatic” was to short.

“This time, I am planning to meet fans for longer period and hopefully we can have more fun together so that there will not lingering feelings afterward,” said the musician.

The titular track is all about heading straight on so as to win over someone you love, in a cute yet feisty way.

“It will not be easy to be so bold in real life, though,” she concedes, “but I wish those who cannot easily gather up the courage like me would feel small satisfaction from this song.”

The song is a dance tune that incorporates punk rock sounds, something she has never tried. But she fell in love with the song the minute she listened to it.
“It would be great if listeners thought ‘Wow, Moonbyul can pull off songs like this,’” she said.

It is the focus track from her solo debut album of the same title that came out in September and reached the milestone on the platform in the second shortest time for a K-pop solo female artist. “Money,” a track from the album, holds the record with 65 days.

Only four songs from K-pop solo female musicians achieved the feat. The other two are also from the members of the band: Jenny’s “Solo” and Rose’s “On The Ground.”

“LaLisa” topped iTunes top songs chart in 72 regions upon release and ranked No. 64 on Official Chart’s single top 100 in UK.

This is the 15th of iScreaM project that releases remixes of SM Entertainment’s EDM label ScreaM Records. The single includes three different versions by producers Zhu, Moon Kyoo and DJ Ginjo. Zhu reinterpreted the song into a deep house tune while Moon Kyoo mixed synthesizer sounds and Ginjo added his own vocal sampling.

Her third LP was released in February and landed atop iTunes top albums chart in 23 regions as well as all major music charts at home.

She is currently emceeing for Mnet’s “Queendom 2,” a contest show among female musicians.

2PM to release LP version of 7th LP next month

2PM will put out LP version of its seventh full album “Must” on May 23, announced label JYP Entertainment on Thursday.

The 10-track LP was released in June last year and was the first album all six members put together in five years during which all, except for Thai native Nichkhun, completed their mandatory military services.

In the meantime, Jun K and Wooyoung will greet fans at a fan meet event in Seoul on April 30 and May 1. The second day’s event will be broadcast live as well. Junho has been cast as the male lead for upcoming drama tentatively titled King The Land starring opposite Yoona of Girls’ Generation.