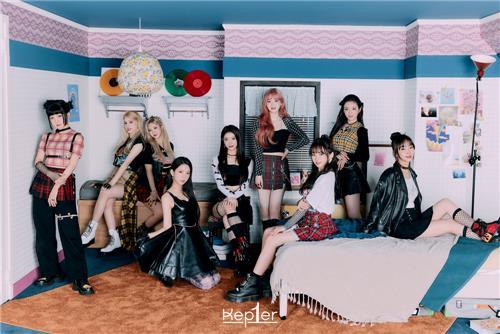 According to the organization on Wednesday, the song amassed 50 million streams, qualifying it for the certification for March. The song achieved the feat in three months, the shortest time for a debut song from a K-pop girl group.

The group is currently competing in Mnet’s “Queendom 2,” a contest among female musicians.

AB6IX will release its fifth EP “A to B” on May 18, said agency Brand New Music on Wednesday.

It has been four months since the group released its special album “Complete With You.”

In the meantime, the quartet will host a series of fan meet events in Korea, Japan and the US starting in June to celebrate its third anniversary. Starting with a two-day meeting in Seoul on June 4-5, it will greet fans in Tokyo and fly to the US to visit six cities through July 1.

The band will participate in a K-pop concert in Frankfurt in May as well. The lineup for the K-pop festival also includes Kai of EXO, NCT Dream, Monsta X, Enhypen, Mamamoo and Ive. All tickets for the two-day event, the largest of its kind since the COVID-19 pandemic, are sold out.

Boy band DKB held a media showcase on Wednesday one day ahead of dropping its fourth EP “Rebel.”

“As we enter the third year of our career, we’d like to show performances and colors unique to us,” said leader E-chan.

As the EP’s title says, the nine-member team revealed its defiant side veering from singing about love and growth as a group of young men. Main track “Sober” depicts how one would like to express his feelings but cannot muster the courage to speak out without the help of alcohol.

“Through this album, we want to demonstrate powerful energy and charisma,” underlined Lune.

In June, the band will be able to do so on a global scale. It will tour the US for the first time, performing in six cities from New York to Los Angeles.

The collaboration between BTS’ Jimin and Ha Sungwoon landed atop iTunes top songs chart in 100 regions, only four hours after the song was released.

This is a record for both a K-pop solo artist and an original soundtrack for a drama, according to producer Nyamnyam Entertainment. In Japan, the song claimed the No. 1 spot in 47 minutes.

The song, titled “With You,” is the theme song for the drama “Our Blues” and the artist’s first take at a drama original soundtrack. It also charted at No. 5 on Spotify’s global chart and garnered over 2.6 million streams on the platform.

Separately, the septet’s music video for “Boy With Luv (feat. Halsey)” surpassed 1.5 billion views on YouTube last week. This is the band’s first video to reach the milestone. The song is the focus track from “Map of the Soul: Persona” from April 2019 and ranked No. 8 on Billboard’s Hot 100 and stayed on it for eight consecutive weeks.