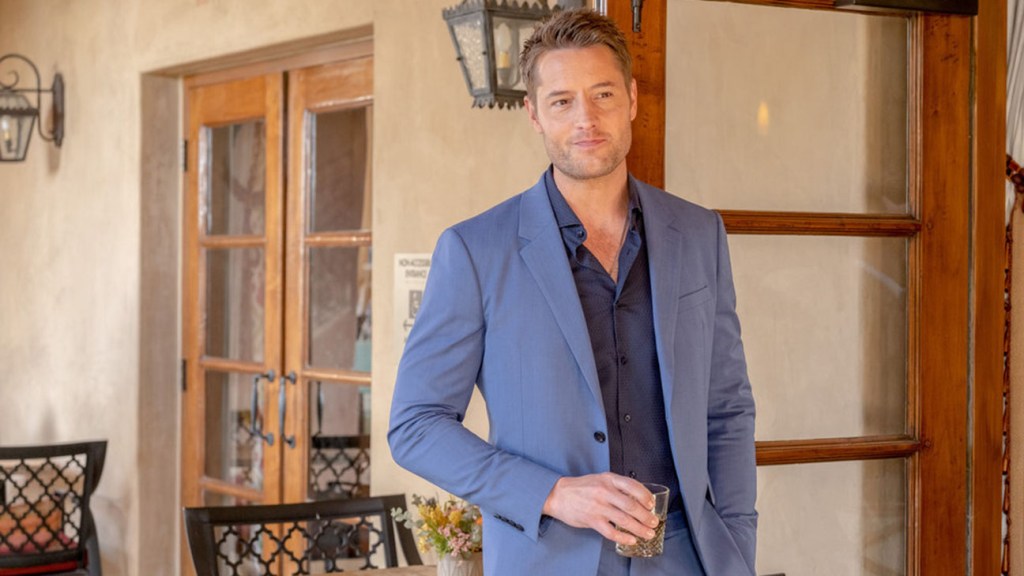 [This story contains spoilers to the April 26 episode of NBC’s This Is Us, “The Night Before the Wedding.”]

With four episodes to go before the series finale of This Is Us, Kevin Pearson has finally found his happily ever after.

The episode prior had teased a whodunnit of sorts around Kevin’s (Justin Hartley) love life, as it circled around the bachelor having spent the night with either close friend Cassidy (Jennifer Morrison), the wedding singer (played by Katie Lowes) or his ex-wife Sophie (Alexandra Breckenridge). Kevin and the entire Pearson clan had arrived to the hotel for Kate’s (Chrissy Metz) second wedding to Phillip (Chris Geere), and the perennially single Kevin was having a bit of a love-life crisis.

But as Tuesday’s heartfelt hour eventually revealed, the woman in question turned out to be the fan-favorite choice: Kevin’s on-and-off love but forever soul mate, Sophie. And it took a winding road before arriving there.

“Kevin has such a big character arc in terms of growth,” Breckenridge tells The Hollywood Reporter of watching the final season, along with viewers, and seeing the Pearson sibling grow into the man her character always hoped he could be — now, in his mid-40s. “It took him years,” she says. “The character was just so self-involved, and he wanted desperately to not be self-involved. It was so hard for him to get out of his own way. But, in the end, he did, coming from one way of being and moving into another way of being entirely.”

Kevin’s adult romances have been nothing but fraught. Most recently, after calling off his wedding to Madison (Caitlin Thompson), the mother of their twins, flash-forwards in recent episodes have shown Kevin falling back into his serial dating ways, particularly after an ill-timed attempt to woo Cassidy falls flat. As he explains to his childhood sweetheart, Sophie, in “The Night Before the Wedding,” any relationship attempts after her have failed. But it takes Sophie seeing the changes with her own eyes to convince her.

Throughout the series, Breckenridge has returned for Kevin-and-Sophie arcs upon receiving the This Is Us call, appearing in some capacity in all six seasons. The first season saw them reconnecting as adults — more than a decade after young Kevin cheated on Sophie to end their marriage. But the pair broke up, again, in season two. Later appearances called Sophie back for a visit from Kevin, unsure about a new relationship, to her doorstep; for the death of her mother in season five; and, now in the sixth and final season, for her attendance at Kate’s nuptials — first, with her husband in tow at the engagement party, followed by Sophie showing up solo months later to the wedding weekend.

Breckenridge says creator Dan Fogelman had planned early in the series for Kevin and Sophie to reconcile in the end. Then, “I think in season five, I had a conversation with Dan where he said, ‘This is how we would like it to go.’ But we weren’t really sure how it was all going to shake out,” she says.

Complicating matters, Breckenridge had landed a starring role on the Netflix series Virgin River, which at the time was heading into shooting its first and second seasons back-to-back in Vancouver. She was able to return to film the funeral episode for Sophie’s mother, but then the pandemic hit and paused all productions. Eventually, Virgin River was one of the first shows to restart production and, when filming its third season, she says it became clear that she wasn’t going to be able to travel from Canada back to Los Angeles, where This Is Us films, because of COVID-19.

“This Is Us came and said, ‘We want Alex to come back for this many episodes.’ But I wasn’t able to do it. And it was a horrible happy problem to have,” she says. “But once we knew that it wasn’t going to happen, I think they pretty quickly started to formulate a different plan for Kevin and Sophie to end up together in the end. They were like, ‘OK. So, this isn’t going to happen this way. We’re going to do it this way.’”

As a result, it took a little bit longer for the two to find their way back to one another. But, as that time passed, both Kevin and Sophie were able to step into their own. When the pair reconnect at Kate’s wedding, Sophie is happily divorced and a traveling nurse, motivated by her late mother, and Kevin has launched his construction company, inspired by his late father, and is thriving in his role as a dad while co-parenting with Madison.

“I think it ultimately paid off, because it gave the two characters more growth on their own as two individuals. And I think that’s the greatest way people can come together, is being whole on your own before you are able to invest in love with somebody,” she says of their love story.

Breckenridge says she’s grateful the two productions were able to make it work so she could return for these final episodes, as Sophie will continue to appear through the series finale. If she hadn’t been able to see this storyline play out, she says she would have been “devastated.” Her scene partner, however, took a lighter approach. “He kept teasing me when I would come on to do the show: ‘Mystic River, Virgin Mountain — what is this thing that you’re doing that’s derailing the whole storyline?’” she shares with a laugh. “He kept pretending like he didn’t know the name of the show for a couple of seasons.”

Viewers have long been rooting for Kevin and Sophie to find their way back to one another, and the decision is ultimately spurred on by a conversation between Kevin’s mother Rebecca (Mandy Moore) and Sophie at the wedding party. Rebecca, who has early-onset Alzheimer’s, believes she is speaking to a young Sophie when she tells her that eventually, when the time is right and if she has the patience to wait, Kevin will become the man Sophie always hoped he could be. Moments later, Sophie delivers a monologue to Kevin, telling him that she wants to love the man he has become.

She continues, “I think Sophie was pretty much always there and always more ready to be in a relationship than Kevin was able to be in a relationship with her, because Kevin’s orbit was in and around himself. He wasn’t able to show up for her in the way that she needed, or that both of them needed to have a stable relationship. I think it’s actually beautiful the way that everything turned out. I think Kevin’s storyline really needed to take that journey on its own to be able to have this solid relationship at the end.”

The episode doesn’t fill in the blanks on why Sophie and her husband divorced. Breckenridge says there was a version of how things ended, but it didn’t make the final cut. Instead, she shares her own opinion.

“Sophie’s heart always belonged to Kevin,” she says. “She was willing to take a chance with him in their 30s and get back together, and he ended up having an addiction problem. In that moment, she was solidly like, ‘OK, this is done for me now. I have to walk away and find somebody that is going to be able to show up for me who appreciates me.’ And she found that. She found someone who was stable and kind, but she just wasn’t in love with him. So when she comes back and sees Kevin [at the wedding], I think she’s really secretly hoping maybe things have changed. And as they re-get to know each other, she realizes that things have changed, and she takes that leap again because she’s never really stopped thinking about him, and he’s always been the one for her.”

With only four episodes remaining, This Is Us has a lot of Pearson storyline to wrap up, particularly as it heads toward the flash-forward with the family arriving to Rebecca’s bedside at the luxury cabin built by Kevin, who was seen wearing a wedding ring in that first glimpse at the future timeline. Breckenridge says to expect more flash-forwards, noting that viewers will see Sophie throughout several timelines up until the end.

“It’s bittersweet, because you do get this satisfaction of Kevin and Sophie finally coming together, but at the same time, you realize there is really not much time to see them together. Especially with Rebecca’s illness and her quick decline, there’s just a lot of ground to cover,” she says of what’s ahead. “But Sophie remains to be a huge support for Kevin and their family — I mean, they are her family, too. I think she feels extremely connected to them; they all really grew up together.”

The final season of This Is Us airs Tuesdays at 9 p.m. on NBC. Read THR‘s chat with Fogelman and the cast on the final season and entire series run here.