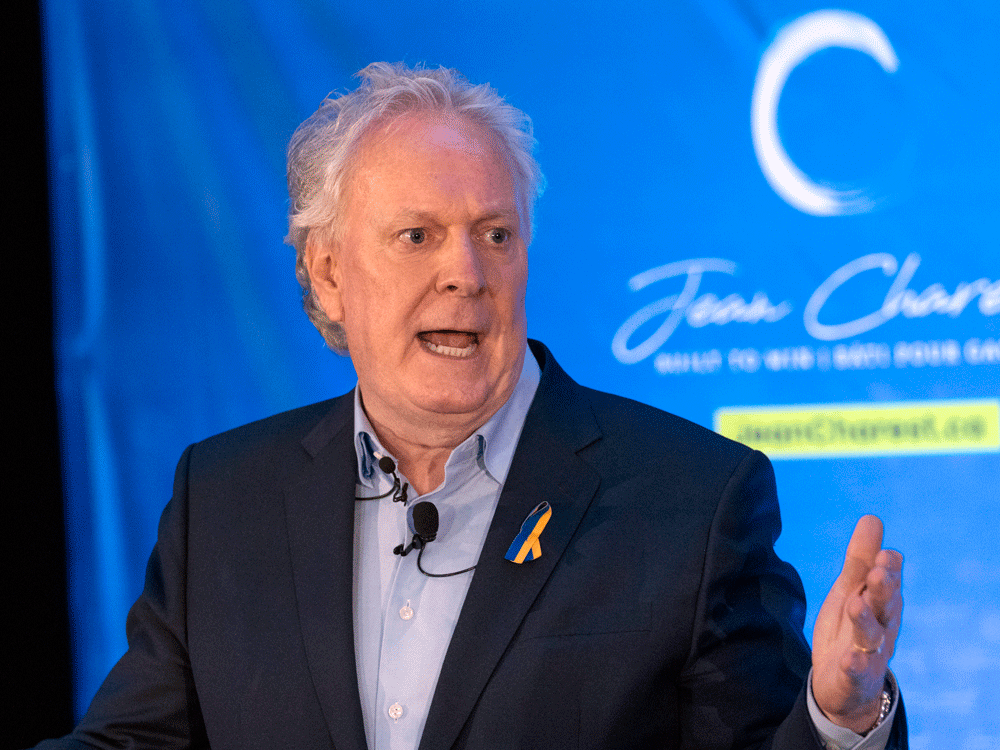 OTTAWA — Conservative leadership hopeful Jean Charest presented on Tuesday what even some carbon tax proponents are saying is a reasonable alternative to the Liberals’ climate plan.

Charest said he would scrap the Liberals’ carbon tax for consumers, but would make industrial emitters pay their share. He would go back to former prime minister Stephen Harper’s targets for 2030, all while promising to achieve Canada’s net-zero targets by 2050.

All that would be achieved in part by “working collaboratively” with premiers across the country and by investing in areas such as nuclear, hydrogen and carbon capturing and storage. He also promises to eliminate the HST on electric vehicles and other energy-efficient products.

On Tuesday, Charest reiterated that his plan is a “credible and realistic approach” to reaching climate targets, without putting an “unfair burden” on Canadians.

His aspirations were echoed by Michael Bernstein, executive director of Clean Prosperity, a non-profit that works towards market-based solutions to the climate crisis, who said in an interview that Charest has a “credible plan for a leadership race.”

“This is probably the most detailed plan I have seen from any Conservative leadership hopeful, at least in recent memory, so I’m encouraged by the fact that this raises the bar for what is required of candidates to demonstrate that they’re serious on climate,” said Bernstein.

However, he said, there are some “clear gaps” such as the consumer carbon pricing, but maintained there are enough details in Charest’s plan to say with confidence that, if implemented, it would “achieve meaningful emissions reductions.”

Stewart Elgie, director of the Environment Institute at the University of Ottawa, also told the Canadian Press that he thought the plan was credible but would benefit from including a price on carbon to all emissions, including from individuals.

But Charest’s plan also garnered some criticism from the left and the right on Tuesday.

Speaking to reporters in Gatineau, his rival for the leadership, Pierre Poilievre, blasted Charest for having brought in the cap-and-trade system when he was Quebec premier and having raised taxes for consumers.

“Now he’s trying to flip-flop in the middle of a leadership race to pretend his position is different. I mean, I don’t think anybody can trust anything he says because he’s doing exactly the opposite now than he did when he was Liberal premier of Quebec not so long ago,” said Poilievre.

Greenpeace’s Patrick Bonin, who has been an observer of the former premier’s time in Quebec politics, said that Charest’s attempt to paint himself as a leader in environmental policy is “widely overrated.”

Bonin added that Charest’s plan on climate would receive a failing grade in his book.

In an interview, Conservatives for Clean Growth executive director Ken Boessenkool said his team had been asked by various campaigns to provide input on their own climate plans and reached out to others to offer help, but declined to say which ones.

He also would not say if the advice included carbon pricing, arguing there is “no consensus” on this issue within Conservatives and even within his own organization.

Most, if not all, candidates have been vocal in their opposition to a carbon tax. It remains to be seen which ones will want to present their own plan on climate before the leadership debates are held in May.

Asked about his own climate plan, Poilievre simply said it would come “well before the next election, when Canadians will have a chance to thoroughly scrutinize it.”