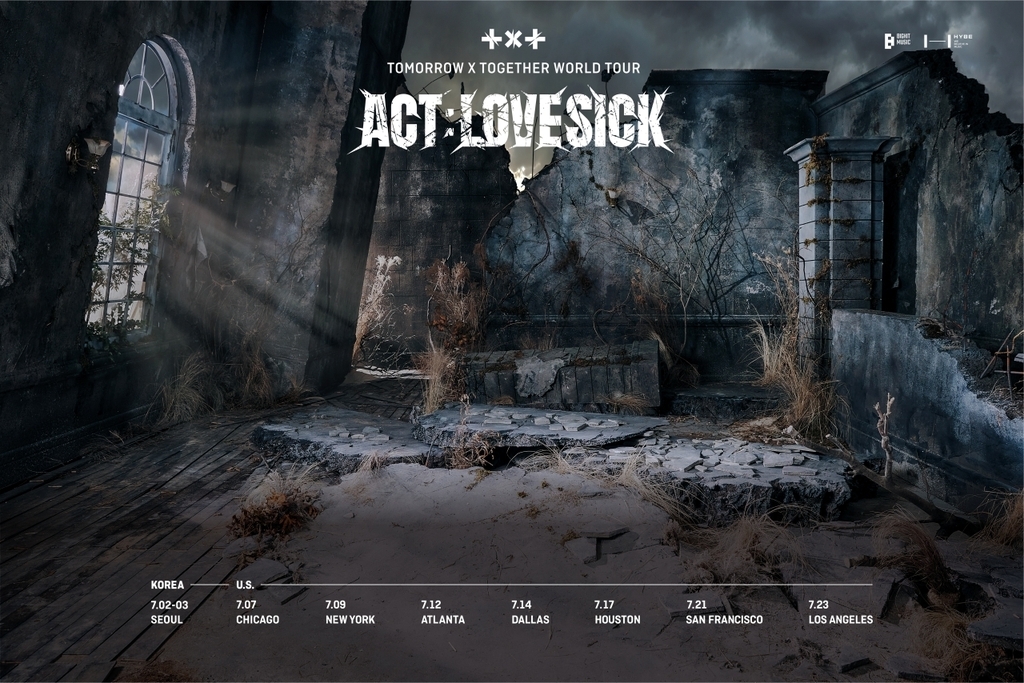 Tomorrow X Together will hold concerts in the US in July, announced Big Hit Music.

It will be the boy band’s first international tour, titled “Act: Lovesick,” bringing the group to Chicago, New York, Atlanta, Dallas, Houston, San Francisco and Los Angeles, just a week after two concerts in Seoul. More concerts are expected to be added.

The five-piece act debuted in 2019 and held showcases in six cities in the US in May of the same year. The group’s second full album, “The Chaos Chapter: Freeze,” charted at No. 5 on the Billboard 200 last year. Next month, the band will come out with its fourth EP, “minisode 2: Thursday’s Child.”

In a teaser trailer for the song “That That,” due out Friday, the artist admitted he was really nervous working with the well-respected musician who is also 16 years his senior.

But Psy said he did not feel the age difference.

“There was this intimate feeling not as an endearing junior but like a real friend,” he said. Suga concurred, adding it was like working with a friend from childhood, and that the two became as close as best friends.

Psy will make a comeback to the scene with an LP that consists of 12 tracks and features Sung Sikyung, Jessi, Hwasa of Mamamoo and Tablo of Epik High.

Twice to release 4th LP in Japan in July

Twice announced that it will roll out a fourth studio album in Japan in May.

On the last day of the Japan leg of the girl group’s international tour at Tokyo Dome, the band shared a video with the audience giving a first look at the title and visuals for the album dubbed “Celebrate.” The LP will be fully unveiled on July 27 and will mark the fifth anniversary of the group’s debut in Japan.

The nine-member act held three live shows at the dome that ended Monday, drawing 150,000 people. Its last concert in Japan had been in 2019. Next month, Twice will return to Los Angeles for double encore concerts.

Major musicians under label SM Entertainment will perform together in Tokyo in August, the company said Tuesday.

The SM Town group concert will be held in person for the first time in three years. The lineup includes BoA, TVXQ, SHINee, Red Velvet, NCT and aespa. EXO’s Suho, Kai and Chen will also take to the stage. Chen is to complete his military duty just one day prior to the concert.

SM Town’s online concert was held on New Year’s Day this year and was broadcast live across the world for free, drawing more than 51 million viewers from 179 countries.