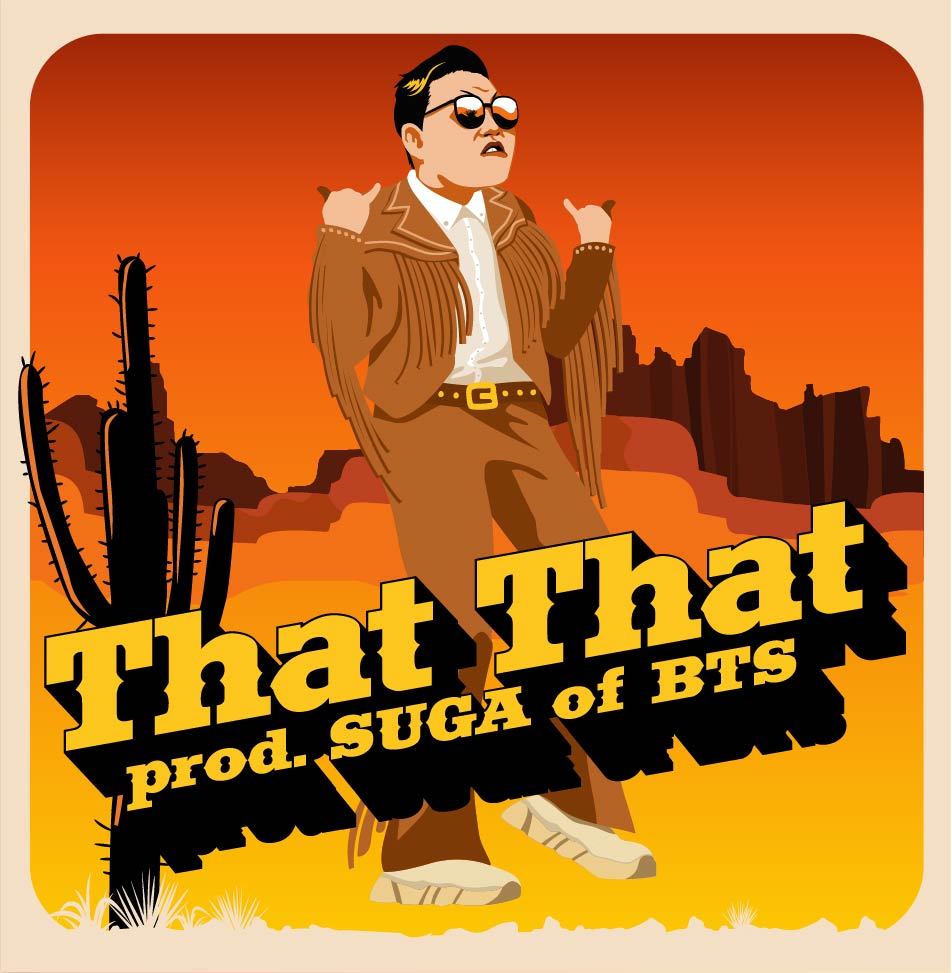 Global world star Psy has teamed up with Suga of K-pop phenomenon BTS for his new album, “Psy 9th.”

Psy’s agency P Nation on Tuesday revealed Suga collaborated with the “Gangnam Style” hitmaker’s new song “That That,” which will front Psy’s ninth full-length album. Suga co-produced “That That” with Psy, taking part in the overall production from lyrics-writing to composition and arrangement, the agency said.

A teaser video of “That That” released on social media on Tuesday shows Psy donning a cowboy outfit and running wildly toward the camera in the streets of a Western town as a sentimental guitar instrumental plays in the background.

In a separate teaser video for the song, the BTS member and Psy each spoke about their experience of working together.

Working with the veteran artist, Suga said he had initially felt “nervous.” But with time, he said the two musicians “became besties in a way.”

“It felt like working with a childhood friend, so it made the song-writing process that much more fun.”

The 44-year-old artist said he usually makes an effort so that younger artists do not feel uncomfortable around him, but with Suga, Psy said he barely felt the age gap.

“He wasn’t just my junior in the business but I felt he was truly my friend,” he said, adding, “If he thinks of me as a bestie, that’s great for me.”

“That That” is the latest track to be revealed from Psy’s upcoming album “Psy 9th,” which consists of 12 tracks all produced in collaboration with some of the biggest musicians in the K-pop scene.

The upcoming record marks Psy’s return with a new full-length album in almost five years, since he dropped his eighth LP, “4X2=8,” in 2017 under his longtime agency YG Entertainment.

In 2018, Psy departed from YG and established his own label, P Nation, the following year. He soon signed with various artists, including Korean American rapper Jessi, K-pop soloist Hyuna and former member of boy band Pentagon, Dawn, and singer Heize.

Psy, whose real name is Park Jae-sang, officially debuted as a singer in 2001 with his first album “Psy from the Psycho World!.” He has dug out his own niche of addictive and danceable music, and became an unexpected breakout success when his 2012 single “Gangnam Style” went viral.

As the song’s “horse dance” craze spread, “Gangnam Style” became the first video on YouTube to rack up 1 billion views and then to 2 billion views since the video platform was launched in 2005. He became the first South Korean artist to rank on the top 10 of Billboard Hot 100 chart with the song, peaking at No. 2 on the singles chart — the highest point reached by a Korean artist then. “Gangnam Style” was later ranked No. 1 on Billboard’s decade-end charts for streaming songs of the 2010s.

Meanwhile, Suga is a seasoned producer for both the group’s music and solo works, the latter of which he drops under the alias Agust D. He has also collaborated with numerous artists, including singer-songwriter IU for her 2020 single “Eight,” Halsey for “Suga’s Interlude,” veteran musician Lee Sora’s “Song Request,” Epik High’s “Sleepless,” to name a few.