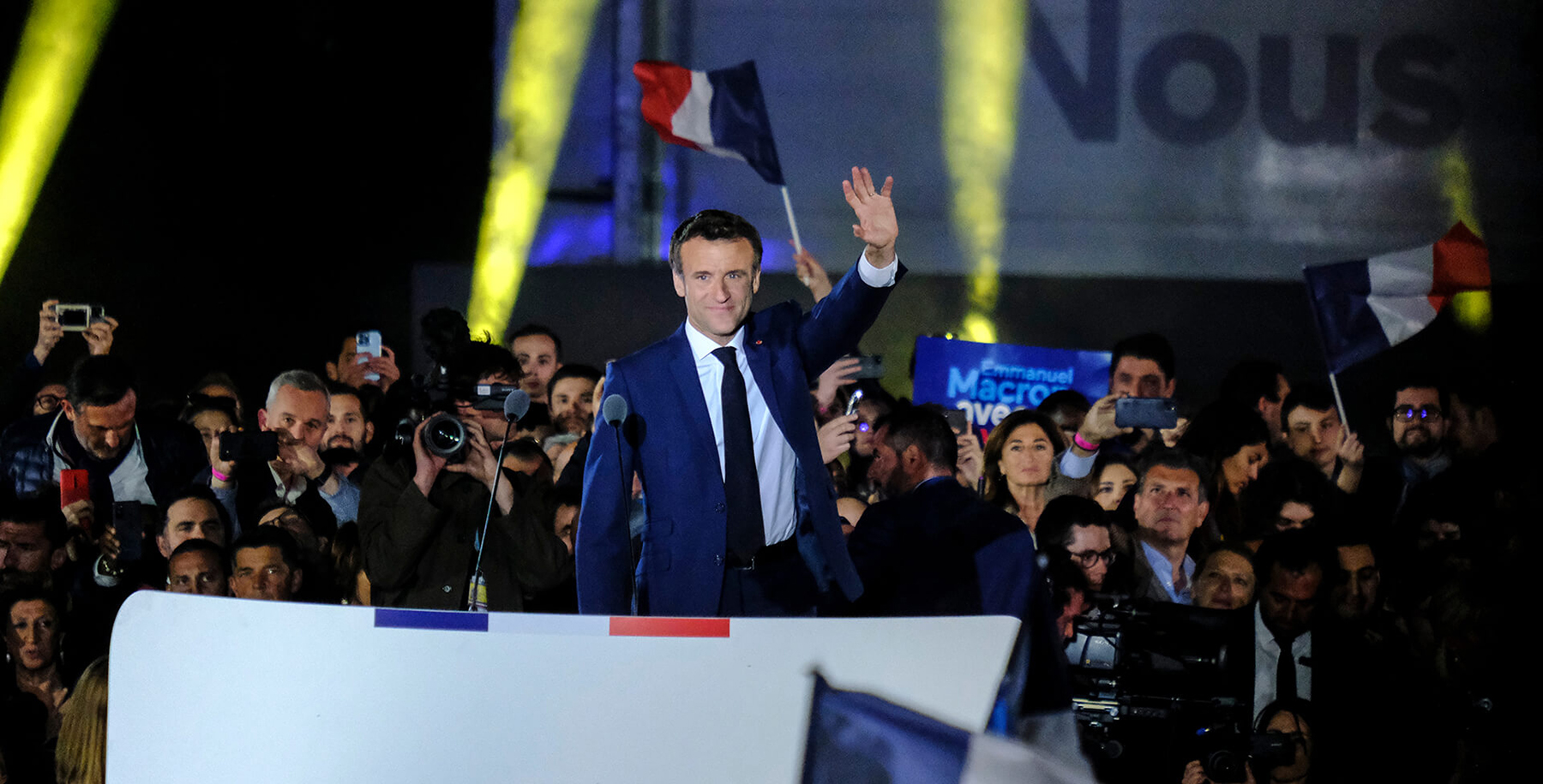 With 58.54% of the vote, Emmanuel Macron unambiguously bucked the recent trend thanks to which incumbent French presidents consistently failed to earn a second term due to their unpopularity. In their election night commentaries, the Macronists noted with glee that their man was the first to gain re-election outside of a period of cohabitation. That sounded like some kind of odd accomplishment invented for the Guinness Book of Records. But it served to distract the public’s attention from what became clear throughout the evening: that, though resoundingly reelected, Macron is just as resoundingly an unpopular president.

Apart from Macron’s supporters, the commentators across the political chessboard saw the blowout more like a stalemate than a checkmate. The left had been divided during the first round. It now appears ready to at least consider uniting its disparate forces for June’s two rounds of legislative elections, which everyone on the left is now calling the “third round” of the presidential election.

The defeated Marine Le Pen put forth a similar message, hinting that her relative “success,” which marked a significant improvement on 2017 (over 41%, up from 34%) opened the possibility of leading a populist movement that she hopes will attract voters from the left as well. Éric Zemmour, the other far-right candidate, a dyed-in-the-wool xenophobe, who at one point appeared to challenge Le Pen’s hold on the rightwing fringe, evoked his ambition for a purely nationalist and basically racist coalition that would avoid the indignity of reaching out to the left.

The buzzword of the evening was nevertheless the idea of a “third round,” in which an adversary might deliver Macron a knockout punch. The Macronists immediately mocked such talk as a denial of democracy, in the minutes following the president’s resounding majority. But as the various interested parties on all sides invited by the television channel France 2 developed their analysis, a consensus emerged that all was not well in the realm of Macronia.

The demise of France’s traditional parties

On the positive side for Macron’s faithful or at least for his political marketers, the traditional parties on the left and right had been humiliated once again. It was even more brutal this time around than in 2017, when Macron first swept through the miraculous gap in the political Red Sea to reach the promised land without even having to dawdle in the desert. The Républicains and Socialists, once the valiant wielders of the scepter of power, are clearly left with little to hope for other than possibly being invited, as individuals, into the new government Macron will be appointing this week to demonstrate his willingness to construct a new alliance. But looming beyond the now concluded five-year compromise Macron engineered and rather ineptly managed during his first term, is the vision of a France now divided into largely incoherent blocs defined less by political vision than by exasperation with all the traditional solutions, left, right and center.

Le Pen and Zemmour have demonstrated that there exists a substantial pool of voters not averse to xenophobic reasoning. But those same voters tend to hail from the working class or the rural lower middle classes. They voted for Le Pen less out of the conviction that she would be a good leader than to protest against the political and financial elite that Macron represents in their eyes. Half a century ago, most of Le Pen’s voters were faithful to the Communist Party.

If the former communist bloc of voters gradually drifted away from a Mitterand-led governing Socialist coalition to align behind the far-right Front National, embodied by Marine Le Pen’s father, Jean-Marie Le Pen, the Socialists settled on their own rightward drift. They leaned increasingly towards the center, much as the Clinton Democrats had done in the US. That left a gaping hole on the left, which no political personality had the force or the name recognition to fill. Jean-Luc Mélenchon, a former minister, finally stepped into the role, seeking to counter the trend towards the technocratic center, a political position that appeared to suit the culture and mood of the post-Mitterand generation of Socialists.

Ever since declaring independence from the party in 2009, Mélenchon has been vilified by his Socialist brethren for the crime of contesting its visibly centrist and increasingly corporate elitist drift. This was the same party, led by then president François Hollande, that named the youthful former banker Macron minister of the economy.

Mélenchon’s persistence during Hollande’s presidency as a provocative progressive, contesting his former party’s orthodoxy, already positioned him in 2017 as the most distinctive, if not necessarily most attractive personality on the left.  Thanks to his more than respectable third-place showing in the first round two weeks ago, he has emerged as the eventual “spiritual” leader of a newly unified left that could bring together the now marginal Communist Party (with just 2.5% of the vote), the Ecologists and even the Socialists, though they remain reticent to acknowledge Mélenchon’s ascent.

Can the left overcome its divisions?

Unlike the famous programme commun that formally allied the Socialists, Communists and the center-left Radicaux de Gauche and brought François Mitterand to power in the 1981 presidential election, Mélenchon has nothing concrete to build on other than exasperation of all the other parties with Macron. Preceding the second round, the head of La France Insoumise (“France unbowed”) cleverly honed his rhetoric to aim at being “elected” prime minister in June, even though he knows full well that the prime minister is appointed by the president, not elected by the people. It is his way of both highlighting the incoherence of the Fifth Republic’s electoral system, while at the same time offering Macron the opportunity to run an experiment in government that would mirror the history of the past five years. During Macron’s first term, an officially centrist president consistently appointed prime ministers from the traditional right, betraying the hopes of some on the left for more balance. Mélenchon is proposing a similar solution, but this time pointing left.

The timing of this strategy couldn’t be better. According to an IPSOS poll of French voters, “57% want to see the main left-wing parties form an alliance and present common candidates in the constituencies.” Importantly, 56% of those polled have stated they do not wish to see Macron obtain a majority, which means they hope to see another “cohabitation” in which the president shares power with an opposition party in parliament. Only 35% of French voters, 6% fewer than voted for Le Pen, would support a coalition of the two extreme rightwing parties, Le Pen’s Rassemblement National and Zemmour’s Reconquête. Voters who support the traditional right are split between seeking an alliance with the extreme right (22%) or with Macron’s République En Marche (25%). An overwhelming 53% of Républicain voters eschew the idea of an alliance with either.

What this means is that the next few weeks will be very interesting to watch. Can the man accused of being “the president of the rich” lead a government focused on the policies of the left? Or does he have the wherewithal and the political talent to confront what may become a populist uprising that draws energy from both the left and the right?

Two years ago when the COVID-19 outbreak forced the French government to take action, I noted in these columns that “French President Emmanuel Macron, of all people, seems to detect the beginning of a calling into question of the entire consumerist free market system, without giving much of a sense of what might replace it.” Perhaps he is ready to take seriously his own two-year old epiphany by appealing to the insights of a coalition on the left led by a prime minister named Mélenchon. After all, this time around, Macron has nothing to lose, since he cannot seek a third term. He might see this as his last chance to recover from the massive unpopularity that threatened his reelection and was saved only by his deft maneuvering aimed at ensuring that Marine Le Pen would be his hapless rival in the second round.

The World This Week: Another French Revolution

More likely, Macron will try in the coming weeks to assemble a range of individuals from different sides, with variable symbolic value. He presumably hopes that this will persuade people of his capacity to assemble his own coherent majority. Macron’s attempt is highly unlikely to succeed and is likely to suffer a worse fate than his previous right-leaning, improvised coalitions.

Macron’s real achievement is to have violated, not once but twice, the entire logic of the Fifth Republic that since its Gaullist beginnings always supposed the president would be the leader of a powerful governing party. In his first five-year stint he profited from the mental confusion in French electors’ heads, trying to understand the vacuum that had suddenly appeared, as he cobbled together what could only be seen as a temporary and to a large degree illusory solution. The confusion quickly provoked the Yellow Vest movement that called the entire montage into question. The unexpected arrival of a pandemic and a lockdown took the protesters off the street and put Macron back in the driver’s seat. A temporary situation was thus prolonged but its fragility has become even more evident than before.

So now the French nation confronts a moment of truth, when the nature of its institutions must be given a makeover. Not because it would improve their look, but because they are on the verge of a permanent crisis. It seems unlikely that some simple solution will appear or that Macron can convince the people to continue to trust him to make, Jupiter-like, all the right decisions that might guide the nation through the troubles that lie ahead.

In his victory speech, Macron said absolutely nothing of substance. He congratulated and thanked his supporters for the victory and announced all the good things he is in favor of, promising, as expected, to respond to the needs and desires of “all” the people. On the same evening, violent protests broke out in Paris, Nantes, Lyon and Marseille, with spontaneous crowds contesting the election. The protesters from the right, upset by Le Pen’s failed bid, were joined by others from the left, who shouted slogans such as: “Macron, Le Pen, one solution: revolution.” Others shouted: “No fascists in our neighborhoods” and “Macron resign.”

Unlike the “Stop the steal” protests in the US following Donald Trump’s loss to Joe Biden, the French do not complain that the election was rigged, nor do they wish to see its results overturned. They are unhappy with a system that fails to represent their interests or needs. Having already effectively rejected the traditional parties and practically erased them from the electoral map, they are now focused on calling into question the curious political anomaly that Emmanuel Macron embodies in their eyes.