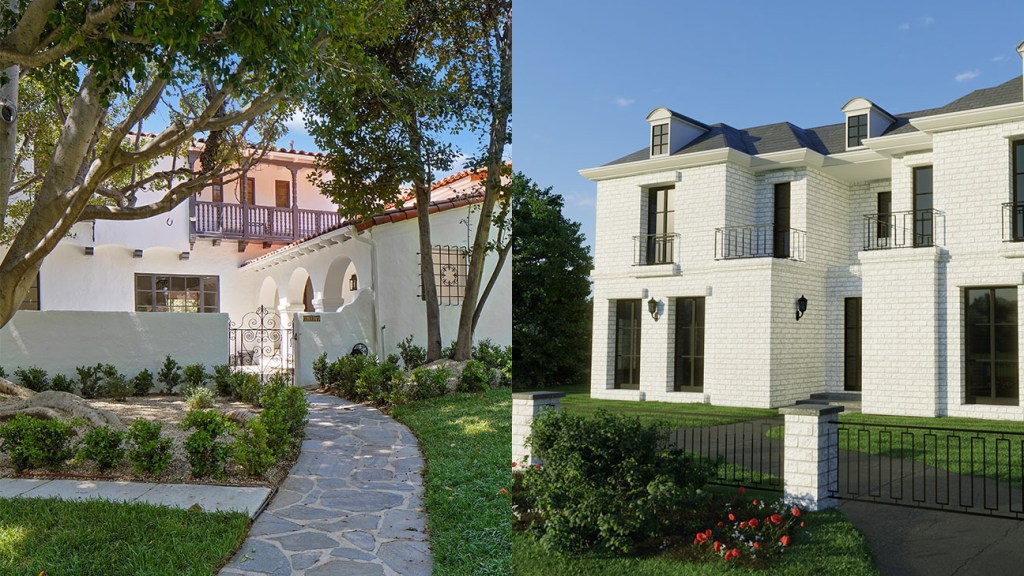 Beverly Hills real estate is moving into the metaverse.

A Spanish-style 1928 home in the flats of Beverly Hills that is coming to market this week for $9.418 million arrives with a decidedly 21st century add-on: prospective buyers also have the opportunity to purchase a sister residence that’s been built in the 3D world Decentraland for an additional $100,000.

Dubbed the BH Meta House —  and put together by metaverse developer LEDY and real estate agent Rochelle Atlas Maize, director of luxury estates at Nourmand & Associates — the listing features a 5,062-square-foot physical house at 607 North Arden Drive that includes five bedrooms in the main house and one bedroom in a guest house, plus a pool and outdoor deck on a 14,100-square-foot lot.

That house also comes with completed plans and pending RTI permits for a new 10,280-square-foot, eight-bedroom Georgian-style house, designed by Beverly Hills’ Gabbay Architects, that can be built on the property.

Those designs have now also been built in the metaverse. Custom-produced by LEDY, the completed 3D replica property — called 607 Beverly Hills MetaHouse — sits on a 2×2 four-parcel piece of land in Decentraland. It includes a unique NFT of the house, and affords the new owner the ability to furnish it, display artwork and other NFTs inside, and have interactive experiences with guests. “it’s a two-fer,” Maize tells The Hollywood Reporter. “You buy a house in the flats of Beverly Hills and you get the house in the metaverse.”

“I’ve been working on this for months,” says Maize, who brought up the idea with the owner of the Beverly Hills house who subsequently got on board. The virtual house will be on display on TVs and monitors inside the physical property, an avatar of Maize also appears in a YouTube video promoting the metaverse house.

Maize — who sold a Santa Monica house last year in two weeks for $5.1 million after inviting a number of TikTok creators to film content on the property — says that LEDY reached out to her at the same time that she was reading up on the metaverse. “I was just kind of researching the metaverse and I get this email, ‘We want to talk to you and we like how your market things.’” Adds LEDY co-founder Mark Emtiaz, “Rochelle is well-known in the industry as one of the people who thinks out of the box in her marketing approach and is open to new ideas.”

LEDY, which builds luxury resorts in Decentraland and Sandbox, initially brought on Maize to help them sell those virtual properties. She and the developers then decided to partner on the Beverly Hills project as well, with both jointly investing in purchasing land in Decentraland for the virtual house. “We spent close to $100,000,” says Maize, who adds that the buyer of the physical house in Beverly Hills is not obligated to buy the virtual one. “If they don’t buy the metaverse house, they will get an NFT of the house,” adds Maize.

As a virtual developer, LEDY has already sold one of its Extraverse-branded resorts that it’s built in the metaverse. Named New Scirocco and set in a virtual Tunisian landscape, it sold in March of this year for nearly $110,000 — “It was 42 ether [cryptocurrency] and at the time that was about $110,000,” says D’Andrea — to a buyer that heard about the project through LEDY’s account on the social-media platform Discord. LEDY is also planning to auction another of its resorts (Grand Aurelia set in the Amazon rainforest) on the NFT marketplace Opensea in the near future.

But LEDY also wants to attract buyers who may not be familiar or comfortable with the metaverse and that’s why the company has partnered with Maize.

“In terms of marketing, we want to develop this bridge between the real life and the virtual life, so that’s why we brought Rochelle on board to bring clients who would potentially be interested [in the metaverse] from the real-life community,” says Emtiaz.