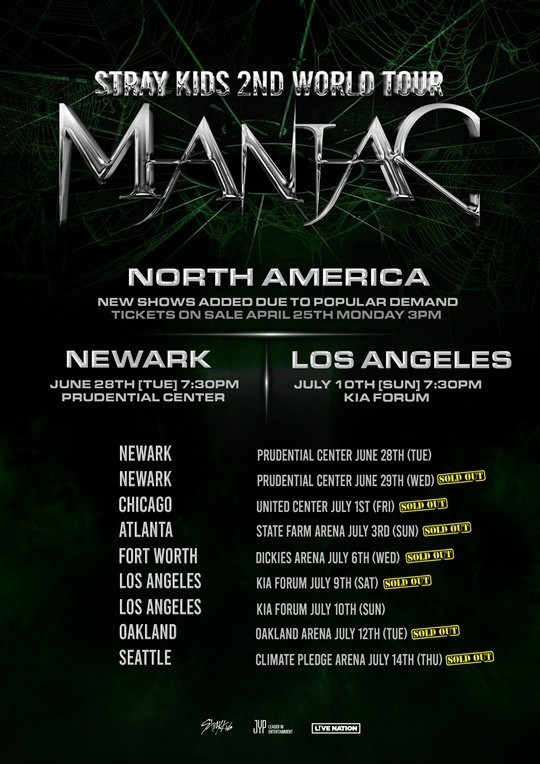 Stray Kids will perform two more times in the US during its upcoming tour, announced label JYP Entertainment on Monday.

The band was originally set to take to the stage once at all seven venues during its upcoming US tour but tickets sold out fast and the management firm decided to add shows in Newark and Los Angeles.

The eight-piece act will kick off its second international tour, named after its recent hit “Maniac,” in Seoul on April 29. The US leg will start in June 28 and will end on July 14.

Stray Kids dropped the “Oddinary” EP in March and it landed atop the Billboard 200, making the band the third K-pop artist ever to do so. The EP has remained on the chart for four weeks in a row and has topped the world albums chart for the same period.

Highlight to perform live after 3 1/2 years

Highlight will headline a concert for the first time in 3 1/2 years, said agency Around Us Entertainment on Monday.

The band will have shows at an indoor stadium in Seoul from May 20-22, under the title “Highlight Live 2022 [Intro]” harking back to the group’s previous concert that was named “[Outro.]”

The final concert will be broadcast live as well through an application.

The four-member act debuted as Beast in 2009 and was renamed Highlight in 2017. Last month, it released its first studio album “Daydream.”

Le Sserafim unveiled the track list for its debut EP “Fearless” on Monday.

The EP will consist of five tracks and Hybe’s head producer Bang Sihyuk participated in writing main track of the same title as well as “The Great Mermaid.” Singer/songwriter Blvsh, who also worked on BTS’ “Life Goes On,” co-authored the titular track while members Kim Chaewon and Heo Yoonjin co-wrote the lyrics for “Blue Flame.”

The debut EP has sold over 270,000 preorder copies in a week. It will be fully unveiled on May 2.

Separately, a local media report said that the six-member rookie band filmed an appearance on the music TV show “Weekly Idol” on Monday.

FTIsland to hold concert in May

FTIsland will hold a concert in Seoul on May 15, announced agency FNC Entertainment on Monday.

The band’s last concert was in 2019 before the members served their mandatory military duties.

This is the first time the band is performing in front of its fans after all three members completed their duties. The concert will be full of lively and powerful band sounds and the set list will consist of its hit songs, said the company.

Vocalist Lee Honggi shared the news first last week after uploading the concert poster and commenting that he has been eager to sing and could not wait to share it with fans.