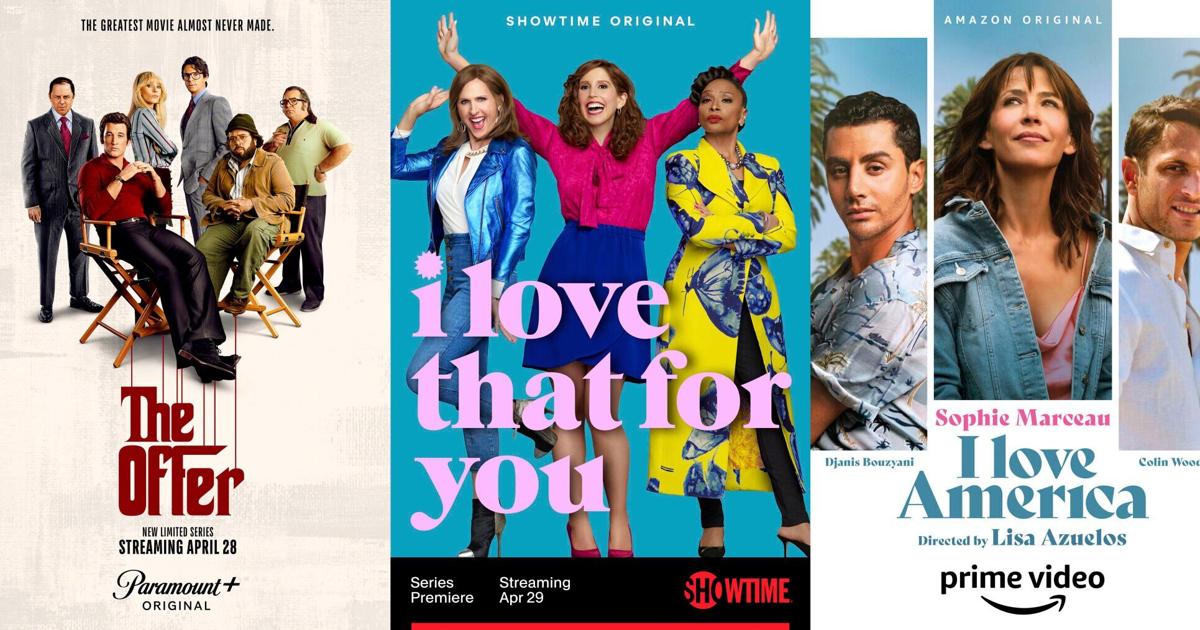 — Here’s an offer that will be hard to refuse: Paramount+ is playing host to the Godfather trilogy starting on Thursday, April 28. Sure, Francis Ford Coppola’s films aren’t hard to come by (they always seem to be playing somewhere on cable), but this is in conjunction with the first three episodes of their making-of miniseries “The Offer” (see below). So leave the gun, takes the cannoli and settle in for 13-some hours of Corleone.

— Not to be confused with Judd Apatow’s Netflix satire “The Bubble” from last month, the streamer also has an anime called “Bubble,” directed by Tetsurou Araki and written by Gen Urobochi coming on Thursday about a Tokyo that’s been cut off from the rest of the world and overtaken by adventurous young people. Oh, and there’s bubbles that break the laws of gravity. Or, starting May 1, you can have a Nora Ephron night with “When Harry Met Sally” and “You’ve Got Mail,” which will also have you quoting “The Godfather.”

— If you’re looking for some fresh rom-com fare, Sophie Marceau stars as an empty-nester looking for a fresh start in “I Love America,” a French rom-com coming to Amazon Prime Video on Friday, April 29. So she leaves Paris behind for Los Angeles where an old friend and current owner of a popular drag club tries to help her start dating again. And Hulu has an LGBTQ teen rom-com called “Crush,” starring Rowan Blanchard and Auli’i Cravalho, also streaming Friday, April 29.

— Future has a new album coming out Friday, April 29 but hasn’t disclosed its name yet. It’s a follow-up to 2020’s “High Off Life,” and will feature Kanye West, Babyface Ray, Drake and Gunna. Future dropped a video for his newest song “Worst Day” and the artist — just named Best Rapper Alive by GQ magazine — has been busy, appearing on Moneybagg Yo’s single “Hard for the Next,” as well as Drake’s “Certified Lover Boy” cut “Way 2 Sexy.” Future also executive produced West’s latest album “Donda 2,” providing vocals on that project’s “Keep It Burning.”

— Kehlani’s third album — “blue water road” — drops Friday, April 29 and it sounds as comfortable and sultry as the singer looks on the album’s cover, photographed on an empty beach with her hair flowing. Highlights include first single “altar,” the sexy duet “more than I should” with Jessie Reyez and “up at night” with Justin Bieber. (The two worked together on “Get Me” on Bieber’s 2020 album “Changes.”) The new album showcases Kehlani’s effortless ability to move from pop, R&B, rap, trance and dance. “To me, the album is like a glass house. It’s light, transparent, and the sun is shining right through it,” she says in a statement.

— Norah Jones is celebrating her breakthrough album “Come Away With Me” with a 20th anniversary reissue including 22 previously unreleased tracks, including “Hallelujah, I Love Him So.” The 20th Anniversary Super Deluxe Edition also includes the original demos that Jones submitted to Blue Note, the complete first session demos she made for the label, and the first version of the album that Jones made at Allaire Studios with producer Craig Street, most of which has never been heard before. The full digital collection will be released Friday, April 29.

— “The Wire” creator David Simon returns to Baltimore, the setting of his triumphant 2002-08 drama, with “We Own This City,” which he produced with fellow “The Wire” alumni George Pelecanos and Nina K. Noble. The HBO limited series dramatizes the corruption that riddled a Baltimore Police Department task force and its impact on the city. Based on Justin Fenton’s nonfiction book of the same title, the series stars Jon Bernthal, Wunmi Mosaku, Jamie Hector and Josh Charles, along with a number of “The Wire” cast members. “We Own This City” debuts Monday.

— Fans of “The Godfather” are fond of recycling its lines, with “I’m gonna make him an offer he can’t refuse” among the most enduring. “The Offer” is the title of a 10-episode Paramount+ series that dramatizes the behind-the-scenes story of the film’s making, based on producer Albert S. Ruddy’s experiences. Miles Teller plays Ruddy, with Matthew Goode as studio boss Robert Evans; Dan Fogler as director Francis Ford Coppola, and Patrick Gallo as Mario Puzo, on whose novel the 1972 film was based. Three episodes of the series, created and written by Michael Tolkin (“The Player”), debut Thursday, followed by weekly episodes on consecutive Thursdays.

— Showtime’s comedy “I Love That for You” stars former “Saturday Night Live” cast member Vanessa Bayer as Joanna, a woman longing to be a host on a home shopping channel. The series also reflects a chapter of Bayer’s real life, overcoming childhood leukemia, with Joanne trying to escape being tagged as “that cancer girl.” Molly Shannon, another “SNL” alum, co-stars as the channel’s star, with Jenifer Lewis as its founder. “I Love That for You” debuts Friday, April 29, on streaming and on demand for subscribers, before its on-air cable debut at May 1.

100 best Western films of all time

100 best Western films of all time, according to critics

#82. The Assassination of Jesse James by the Coward Robert Ford (2007)

100 best Western films of all time

#50. The Assassination of Jesse James by the Coward Robert Ford (2007)