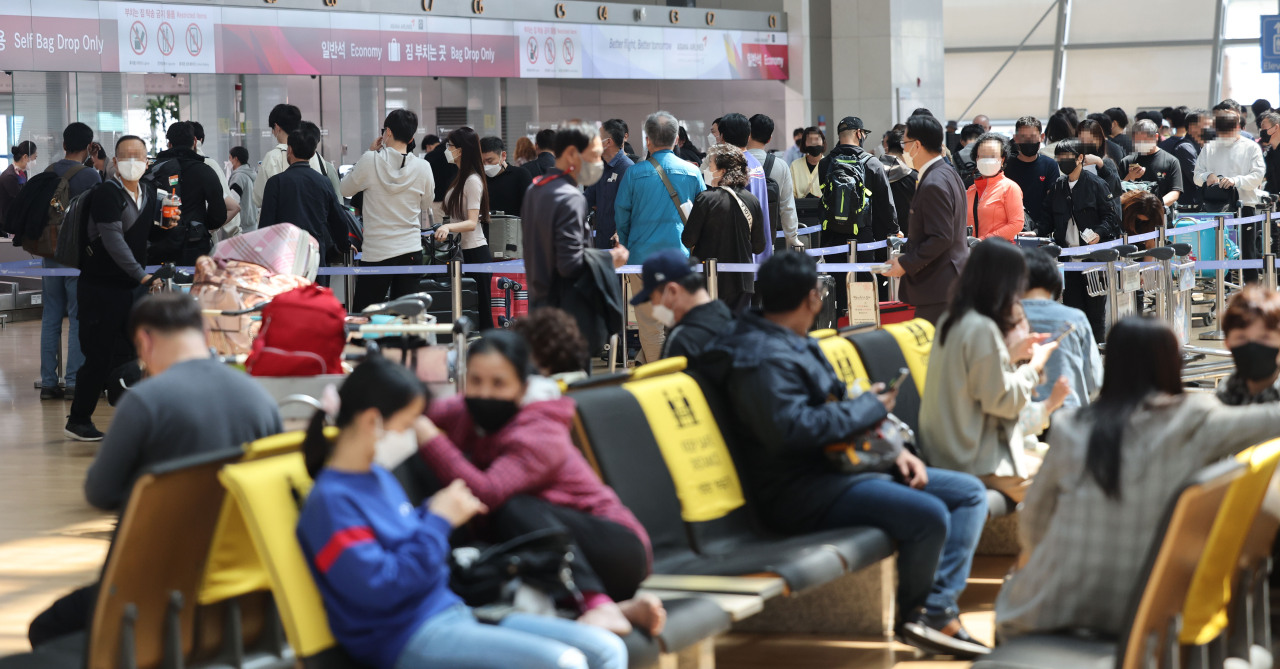 The daily average of air travelers is expected to be around 81,000 in July, which is around 40 percent of air travelers from the same period in 2019, right before the pandemic hit the world, according to the operator of South Korea‘s major air gateway Incheon Airport, on Monday.

After November, Incheon International Airport Corp. anticipates a 70 percent recovery of the daily average air travelers and is gearing up for normalization of its operations in phrases, officials said in a regular press briefing.

In the first quarter of this year, the number of air travelers showed a 94 percent increase from the same period last year.

With such imminent recovery, Incheon Airport will be resuming the operation of the airport at three different levels.

Currently, at Level 1 of airport operation, only 50 percent of departure gates and 67 percent of arrival gates are operating.

The operation of airport limousine buses that connect major cities to the airport has dwindled to 30 percent and only 57 percent of duty-free stores and food courts are currently in operation.

To bring the airport’s operations to pre-pandemic levels, Incheon Airport plans to provide marketing expenses to advertise travel products to highly popular tourist destinations and to flight routes that have seen the fastest recovery.

But to seek fast recovery in travel demand, there is a need to ease quarantine measures, Incheon Airport noted.

For instance, having to do a PCR test prior to traveling abroad is a financial burden, as it costs 240,000 won ($192) for an individual to take the test once upon departure to destinations that require it and once upon arrival.

So instead of PCR tests, the airport proposes replacing them with rapid antigen testing.

Incheon Airport also pointed out that the government should lift the curfew for arrivals.

Currently, there are no arrival flights allowed in Incheon Airport from 8 p.m. until 5 a.m.

“In line with the government’s quarantine measures, we plan to carry out the normalization of airport operation in stages by closely consulting with related ministries so that passengers planning oversea travels can use our airport safely and conveniently,” said Incheon International Airport CEO Kim Kyoung-wook.

Asiana Airlines, meanwhile, said it will reopen the Incheon-Delhi route and operate one flight a week starting Friday, resuming its India operation after 33 months.

South Korea’s second-largest air carrier is also expanding the number of flights on routes to Sydney, Los Angeles, Osaka and Fukuoka in Japan, Hanoi and Ho Chi Minh City in Vietnam and Philippines capital Manila from May, it said.

Air Busan, a budget airline under Asiana, said it will resume services on routes from Busan to Fukuoka, Danang, Vietnam and Philippines destination Cebu. The Busan-Fukuoka route will be reopened from May 31, with the routes to Danang and Cebu to be resumed on June 29 and July 15, respectively. Air Busan will open five new international routes from Incheon to Osaka, Tokyo, Guam, Nha Trang of Vietnam and Kota Kinabalu of Malaysia next month, it added.