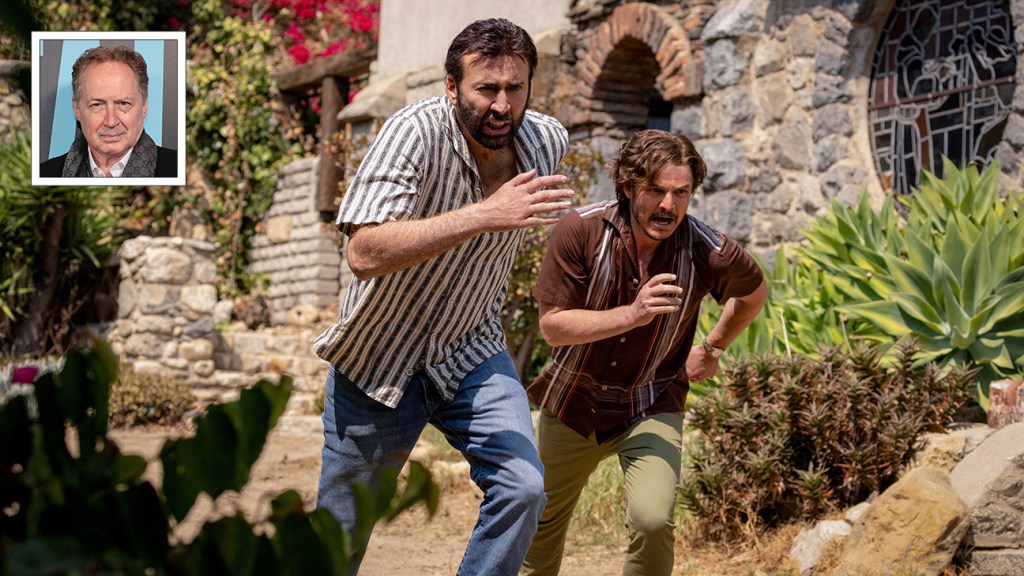 Composer Mark Isham wasn’t the first choice for the Nicolas Cage semi-meta action-comedy The Unbearable Weight of Massive Talent, but he was the right one.

Isham had sent in his reel when the call for a composer first went out, but when he didn’t score the job, the award-winning musical mind behind countless films — including Cage movies Bad Lieutenant, Next and Stolen — tucked the project away in the back of his mind. It was something he might want to see, even if he ultimately couldn’t work on it.

Then the phone rang.

“A call a couple of months later says they’ve got trouble, and they would love to meet with me again,” Isham recalled.

But he still hadn’t seen the movie. In fact, all he had at that point was a two-line synopsis. So he asked to watch what he’d be taking on. The viewing was a chance to see “exactly how it was working and how great it was” before he delivered his pitch.

His concept combined his musical treatment of Cage on other projects with several genres and thematic concepts, with a heavy Spaghetti Western influence. With the help of director and co-writer Tom Gormican, who Isham told The Hollywood Reporter was “very hands-on,” he delivered a “multi-genre score of Nick Cage.”

“We touched on everything — the moody stuff, the passionate. We use flamenco guitars; we use Spaghetti Western; we use hardcore action music,” Isham said.

Following the film’s theatrical release on April 22, the composer spoke to THR about the score’s influences and various Cage references and worked with the movie’s director and music supervisor to craft Unbearable Weight‘s musical identity.

What was that working relationship with director Tom Gormican like?

Tom is very, very collaborative. He had been working on the music not only for temporary music but on a score with someone else. So he had a lot of ideas. He knew a lot of what didn’t work, and he had some ideas of what would work. So my first job was to present those ideas — at about 15 to 20 minutes worth of music — and they did work. We went on from there, famously, but he’s a very hands-on guy — lots of thoughts, lots of opinions, lots of things to try. We ended up with something that I was very happy with.

Were you working closely with any other people in the music department, like the music supervisor, to help you set the tone and choose between composition or needle drop?

Yes, George Drakoulias and then Julia Michels, at the Lionsgate music department, who was very hands-on as well. George and I would talk quite frequently because he had some big needle drop moments. Tom kept saying, “Maybe we should try a song here or a needle drop instead of a cue here,” so we would go back and forth. George would call me and say, “Look, he wants to try a needle drop here. This is what he’s looking for. It might be better to score, but you should know that this is what he’s looking for.” So we had quite a lot of chats about that, and he’s a great collaborator. He’s very good at what he does. And Julia just supported the whole thing. She was a tremendous support system when those late nights came around.

You’ve composed many film scores, including several for Nicolas Cage films. How was this project different for you?

That’s exactly the question I asked myself when they called me and said we want you to score this picture. I said, “Well, all I’ve heard about is a two-line synopsis, and I haven’t the faintest idea if this even works.” (Laughs.) So they sent me the picture and fortunately — of course — it’s very good. When I thought about it, I said what this needs is just a traditional score, even a score influenced by movies earlier than Nicolas Cage. I went back to Ennio Morricone and Lalo Schifrin and listened to that almost Spaghetti Western-type stuff if you will. Because, after all, it’s a buddy movie with its roots in a Western showdown. But it’s also so much more. It gets very modern in the chase scenes, with modern percussion because the movie demands it. But at its root, it’s very traditional. It has a big John Berry-type, eight-bar theme. I think it allows the audience to sort of wink-wink, nudge-nudge. We are just having a great time here.

Did you compose any easter eggs related to Cage or your past scores for the Unbearable Weight music?

There’s an homage — a little personal homage — to Mr. [Hans] Zimmer. There are also a couple of Nick Cage action films that I’ve scored, so I have my little things I snuck in there for the scores that I’ve done with them. One of my favorite Nicolas Cage scoring moments prior to this one was with a Werner Herzog film Bad Lieutenant. And that, of course, is about as far away from this film as you could possibly get. It’s darker than dark. There are a couple of moments where I tried to borrow some stuff. He has a lot of drug trance things in that movie, and, of course, there’s the acid-taking scene in this movie. It’s a bit of a stretch, but for me, I can hear it. I don’t know if anybody else would ever hear it.

Two of the songs on your score serve as yet another Nick Cage reference in a Russian doll film of Nicolas Cage references. There’s “Nick-Napped” and “You Must Kill Nicolas Cage.” Can you talk about what’s behind those titles in terms of meaning and music?

“Nick-Napped” is the turning point in the film. You’ve been teased by Tiffany Haddish. You know that she’s in the CIA, but you don’t quite know how it’s going to affect Cage. So when he’s kidnapped, and they’re sitting in the van, and he’s being given the lowdown, this turns this movie into a whole other [movie.] That title is a play on words. But in the scene itself, we, for the first time, enter the action genre. The suspense genre. Shit is different here. It actually seems like lives are at stake. Up until that point, it’s just been sort of funny. You feel ‘Oh, Nick, stop crying. You’re a star.’ (Laughs.) But he’s so good at being that character, the sad Nick Cage. But then you realize, “Oh my goodness, he actually might be in a real situation, and this movie has taken a 180-degree shift.” So the music had to change there. All of a sudden, the low bass has come in, the grooves, the tension notes, all of that stuff starts to build from that scene. To the end, really.

“You Must Kill Nicolas Cage” — that line just comes off the screen so strong. The cousin turns to Javi [Gutierrez, played by Pedro Pascal] and says, “You must kill Nicolas Cage.” You realize that for Javi, this is a sentence, and there could not be a worse sentence he would ever hear from anybody in his entire life. Someone has just told him that he has to kill the man that he has idolized and worshipped and now has become one of his best — if not best — friends. This is a line of absolute despair and terror. Javi was never going to recover from this. So the line itself just had to be used as a title. It’s just too good a line not to. (Laughs.)

This movie has so many genres. What was the most challenging genre or aspect when scoring?

What makes music funny isn’t necessarily the music itself. Obviously, you have Spike Jones, and you have, sort of, funny music. But that’s a very small genre, and it’s not used that much in comedy films. What makes music funny is the juxtaposition. You put a [Joseph] Haydn string quartet in the last place you’d ever expect to hear a Haydn string quartet, and it’s funny. Or you put a James Brown song in a scene where you never expect to hear that, and it makes you stop. So it’s this juxtaposition of a genre in a place, used in a way that you never expect. I think that was the hardest thing, for instance, in the scene where Vivian, Tiffany Haddish’s character, is describing to Nicolas Cage that a movie has to have a hook. I have maybe 15 versions of that cue on my computer. What do you do that connects to her that you don’t expect, that’s not part of this film, that makes what she’s telling Nick funny just by the juxtaposition of this music? It took us at least 15 tries to find something that worked. In that case, it’s not about the notes. It’s not about the E flat or the F. It’s really about the concept.

Beyond that comedy or action, there are some emotionally dramatic moments for “Nick Cage.” Is there a moment musically that stands out to you in telling that part of the movie’s story, and how did you compositionally tackle that?

There’s a death that occurs in its most flamboyant form; then, he comes to this personal realization in a very surreal moment there. In the end, there’s a heartfelt reuniting of a family at the end, and it appears. I dressed it up in every different suit of clothes it could possibly be. I did a Morricone, sort of, Farfisa organ with a voice version. We did a full 90-piece orchestra version and a small chamber music orchestra with a solo cello version. It gets a lot of different clothing changes.

Before, you mentioned Spaghetti Westerns had a notable influence on the score. What were you tapping into to recreate that sound?

It comes from Ennio Morricone and the Clint Eastwood series of films he did of westerns. Even though they’re directed by Italians and scored by Italians, they’re a very American thing. The two badass guys are facing off in the town square and going to draw down on each other. Morricone came up with these beautiful sorts of orchestrations for this that were totally off the cuff. That nobody had ever really done before. I didn’t want to go whole hog, but I did borrow that tremolo electric guitar that is used there. Then I augmented it in different ways. It’s an homage I think that I loved, and then the director said, “Let’s have more of that!” (Laughs.) So anytime these guys get caught in that sort of showdown — when Javi has been told, “You must kill Nicolas Cage” — we can go down to that guitar. It brings back this sort of iconic remembrance to the American West and to the Clint Eastwood-type characters of the bad guys who must kill. The time is now. It’s high noon.

Is there a favorite music cue from the film for you?

Not all films give a composer a chance to really write that Pulitzer Prize-winning composition. A lot of the time, you’re doing something so specific to a film that, yes, you’re happy with what you’ve done, and you’re proud of it, but it isn’t maybe that whole thing that you would do in another genre. Occasionally, films offer you that opportunity, and I would have thought that this film would not have. Most comedies don’t. But in the scene when Javi takes his stand on the street, Tom turned to me, and he said, “We’re going to turn the effects off. This is your scene, pal,” and so I sort of went for it. That’s almost a moment like that for me with this film, where I said that’s a really good piece of music, and I stand by that compositionally. I’m so glad it’s in a film like this because that’s very rare.

This interview was edited for length and clarity.