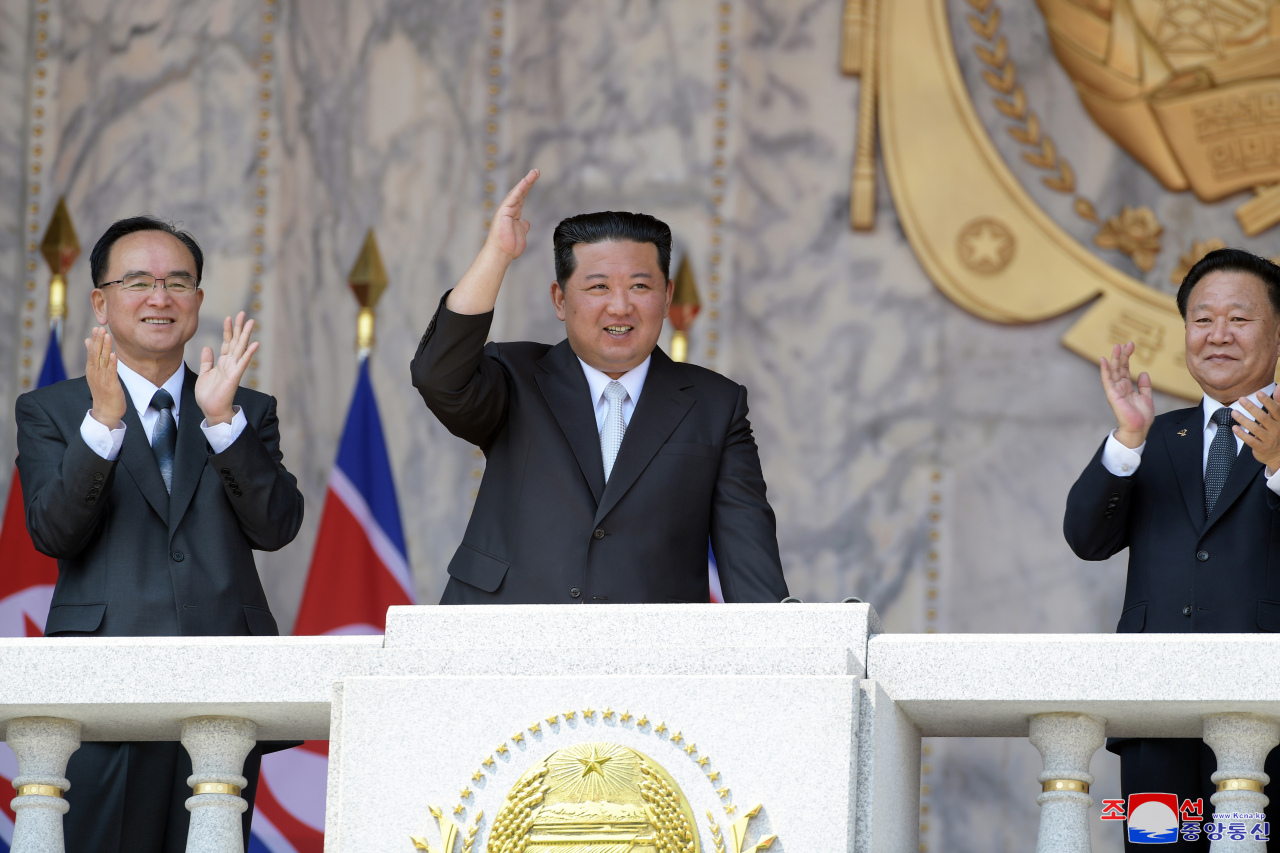 North Korean leader Kim Jong-un has exchanged letters with South Korea’s outgoing President Moon Jae-in and expressed gratitude toward Moon for his effort to improve inter-Korean relations, the North Korean state media reported Friday.
The state-run Korean Central News Agency, which mainly targets the external audience, swiftly reported that Kim on Thursday replied to Moon’s personal letter delivered Wednesday.
“Dear respected comrade Kim Jong-un highly appreciated Moon‘s agonies and hard efforts for the great cause of the nation until the end of his term, recollecting that the North and South Korean leaders pronounced the historic joint declarations and gave hope for the future of the entire nation,” the KCNA reported in a Korean-language dispatch.
The North Korean state media notably said the two Koreas can mend their bilateral ties if both continue to put forward efforts, adding that the exchange of letters between Kim and Moon “shows their deep trust,”
“The North and South Korean leaders shared the view that inter-Korean relations will be improved and developed in line with the nation’s desire and expectations if both sides cherish the hope and make tireless efforts,” the KCNA said.
The KCNA also said Moon “expressed his willingness to make the North-South Korean joint declarations a foundation for the reunification even after his retirement” in his personal letter.

South Korea’s presidential office on Friday confirmed the exchange of personal letters between Kim and Moon hours after North Korea’s state media report.
“President Moon asked Chairman Kim to engage in inter-Korean cooperation keeping the great cause of peace on the Korean Peninsula,” Cheong Wa Dae spokesperson Park Kyung-mee said in giving a briefing on Moon’s letter to Kim. Moon went on to say that “progress in dialogue will rest with the next government.”
Park said Moon “hopes that the era of confrontation should be overcome through dialogue and talks between North Korea and the US will be resumed expeditiously,”expressing his regret over inter-Korean relations not developing as much as he hoped for.
In return, the North Korean leader said he and Moon have made “historic declarations and agreements that will be milestones in inter-Korean relations” although they could not take steps further as they hoped for, the Cheong Wa Dae spokesperson said during the briefing.
While Kim assessed the inter-Korean declarations and agreements as “indelible achievements,” he views that inter-Korean relations have left much to be desired, according to Park.
A South Korean senior official, who wished to remain anonymous, on Friday said Moon emphasized that the two Koreas “should overcome the situation with dialogue” particularly at a time as Moon finishes out his term.

The North Korean state media’s prompt report on the exchange of the friendly letters between Kim and Moon came at a critical juncture on the Korean Peninsula, as the Kim Jong-un regime has ramped up the pressure on South Korea.
North Korea has accelerated in developing short-range ballistic missiles that can carry tactical nuclear weapons, while recent commercial satellite images indicate ongoing restoration work at the Punggye-ri nuclear test site.
Pyongyang has also been gearing up for a massive military parade that is likely to show off advanced, strategic weapons on the occasion of the 90th anniversary of the founding of the Korean People’s Revolutionary Army on April 25.
North Korea’s external-oriented media outlets have recently ratcheted up their bellicose rhetoric specifically against South Korea for conducting the combined military exercise with the US.
Professor Kwak Gil-sup of Kookmin University assessed the North Korean state media report as a short-term, “tactical move” to achieve multiple objectives, including stirring up “South-South conflict” and driving a wedge between South Korea and the US.
In essence, Kwak said North Korea simultaneously seeks to “take a breath“ and catch South Korea napping by giving hope to the South Korean government before making more “high-profile provocations.”
Another major goal is to “win Moon and a dovish group over to the North Korean side” by showing a conciliatory gesture before Moon leaves office.
“North Korea will be able to capitalize on the dovish, progressive group, and the group’s support will give North Korea the advantage,” Kwak told The Korea Herald. “But if North Korea solely takes a hard-line stance and ramps up the pressure at this juncture, the country will face a confrontation with the progressive power. The progressive power will eventually shift its stance toward reinforcing national security against North Korea.”

Echoing the view, Cheong Seong-chang, director of the Center for North Korean Studies at the Sejong Institute, said that “North Korea views that President Moon can play a role in keeping the Yoon Suk-yeol government’s hard-line North Korea policy in check .”
Cheong Wae Dae also confirmed that Moon will still be on the same page with Kim “at any time and anywhere in establishing peace on the Korean Peninsula” after his term.
But director Cheong said North Korea aims to instigate the internal conflict over North Korea policy in the run-up to the inauguration of the new South Korean government by unilaterally announcing the exchange of letters.
“North Korea seeks to stir up South-South conflict by contrasting President Moon’s conciliatory message that he will endeavor to fulfill the inter-Korean declarations signed by the leaders even after leaving office with President-elect Yoon Suk-yeol’s hard-line stance on North Korea.”
Cheong also pointed out that the North Korean media report came as the Kim Jong-un regime has stopped attributing significance to the inter-Korean agreements following the breakdown of the Hanoi summer in February 2019.
Kwak also views the KCNA report as “containment against the Yoon Suk-yeol government” with the intent to “prevent it from taking a tough policy.”
“North Korea also clearly signals that the next government should work together with the country to improve inter-Korean relations rather than focusing on coordinating with the US and joining the pressure campaign,” Kwak said.
Park Won-gon, professor of North Korea studies at Ewha Womans University, said North Korea will “shift the blame for rising tension on the Korean Peninsula to the Yoon Suk-yeol government by comparing it with the Moon government if the newly launched Yoon government responds strongly to North Korea’s offensive actions.”
Cheong also pointed out that the Kim Jong-un regime aimed to send a message targeting the South Korean audience, given that North Korea’s external-oriented KCNA only reported the exchange of the personal letters.
The Rodong Sinmun, which is an organ of the ruling Workers’ Party of Korea and is published for the domestic audience, antithetically did not carry the report.

Cho Han-bum, a senior research fellow at the Korean Institute for National Unification, said the media report shows North Korea’s pursuit to “tone down the Yoon Suk-yeol government’s expected hard-line policy.”
“North Korea says its intention is not to perpetually pursue confrontation, but to engage in dialogue under the right circumstances,” Cho told The Korea Herald. “In addition, Pyongyang aims to empower the dovish group within South Korea, which endorses dialogue.”
But in essence, Cho said, North Korea expresses its willingness to return to the dialogue table when they can engage in negotiations that can bring desired results.
“North Korea has made the inevitable choice and path of moving toward the hard-line policy and ratcheting up the pressure on South Korea and the US, but it will be also burdensome for the country to continue confrontation,” Cho said.
Cho said the Kim Jong-un regime would also see the necessity of resuming dialogue in view of economic difficulties, the COVID-19 vaccine supply, and among others.
“Therefore, North Korea has also faced a dilemma. The country signals that it will engage in negotiations in favor of the country (from a position of strength) after strengthening national defense capabilities and gaining the upper hand over South Korea and the US.”