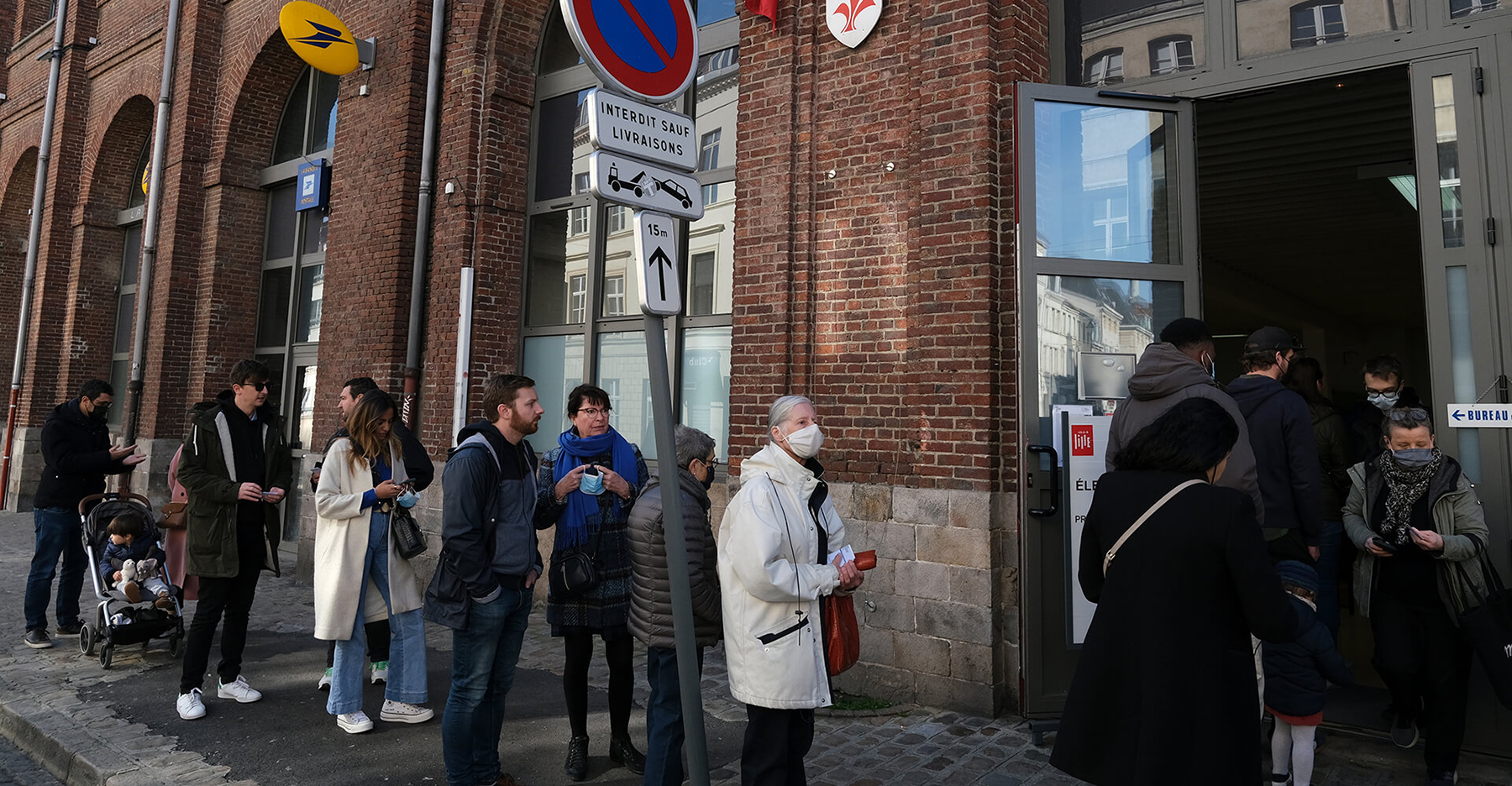 People queue to vote for the first round of the presidential election at a polling station in Lille, France, on April 10, 2022. @ Alexandros Michailidis/Shutterstock

On Sunday, April 24, the French will vote for their president. And the choice for the second and final round of the presidential elections is straightforward: vote for our Republic or against it. This is the third time that a representative of the far-right party led by the Le Pen clan has qualified for the final round. Twice before, in 2002 and 2017, millions of French took to the streets to protest this phenomenon. They went on to vote in large numbers against the Le Pen family —  first father and then daughter — to defend the French Republic, uphold its values and protect its fragile grandeur. In both elections, the French voted more for an idea than the candidate opposing either Le Pen. This idea was simple: defend our rich French heritage against a dangerous extremist ideology that undermines not only our Republic but also our nation.

We have “changed, changed utterly”

Something has changed since the days of 2002 and 2017. This time around, many choose not to choose. Thousands are breaking ranks with past beliefs and practices. They are not outraged by Le Pen making it to the final round of the presidential election. They are neither demonstrating nor showing any intention to vote. Alarmingly, even progressive thinkers are shilly-shallying in the face of adversity.

From afar, I am taken by surprise, still dumbfounded by how many people — including family and friends — are willing to compromise on what we have held to be non-negotiable principles. Instead, many French seem to be inclined to dive into the unfathomable. I wonder why? What has happened in my absence for this ni-ni concept (neither Macron nor Le Pen) to replace revulsion for a fundamentally abhorrent populist position? Is it out of spite, frustration or anger vis-à-vis the current president?

Emmanuel Macron might have failed on many fronts. Like many politicians over the ages, he might be guilty of false promises and dashing expectations. Yet Macron does not assail the values of our French Republic. He adheres to the constitution, the precedents and even the values of our Republic. Have the French lost all judgment and adopted a new nihilistic moral relativism?

The World This Week: Another French Revolution

Marine Le Pen appeals to the people. In recent years, she has cultivated a softer image, the image of a figure who cares about the common people. And we know that modern politics is less about ideas or positions and more about connection and caring for the voter. This is especially so during election campaigns. Over the last few weeks, it seems that Le Pen has done a better job at showing empathy for the poor, the voiceless, the marginalized and the desperate than Macron. The bottom half of the country who struggle to make ends meet seem to identify more with Le Pen than her rival.

Le Pen’s strategy to tone down her racist rhetoric, promote a strong social agenda and focus on the most vulnerable seems to be paying off. At the same time, Macron is still regarded as “le Président des riches.”  More than ever, voters identify him with the well-off, the influential, the tech-savvy entrepreneurs and elites of all sorts. The disconnect between Macron and the ordinary voter is terrifying. Worryingly, even the middle class is splitting and stalling. If we do not remain vigilant, the thrill of the unknown conjured by many of the sorceress’ apprentices will inevitably turn into the chill of disenchantment on Monday morning.

What is the real choice this Sunday?

Simply put, this bloody Sunday is about choosing the rule of law over the law of the mob. It is about choosing impartiality over discrimination, multilateralism over nationalism, cooperation over strife, cohesion over division, inclusion over exclusion, and democracy over demagoguery. This election is about saving our Republic.

We French must remember that politics is a dangerous game. Yes, incarnation is a part of politics but some things cannot be reborn or recast. There are inalienable values for any civilization, any nation and any democracy. We must stand up for them. For all her tinkering and softening, Le Pen stands for extreme nationalism, irresponsible populism and dangerous xenophobia. To use an Americanism, she does not offer a decent value proposition for us French voters.

Democracy is at risk around the world. France is no exception. Today, many in France believe that they have nothing to lose and everything to risk. This belief characterizes fragile societies and failed states. I should know. I have been working on them.

In fact, the French have everything to lose and nothing to risk. The current system is already tottering. This election confirms the collapse (and perhaps even end) of traditional parties, the rise of identity politics from Jean-Luc Melenchon on the left to Eric Zemmour on the right, and the mainstreaming of ecology and its fragmentation across the political spectrum (voiding the Green Party of its substance and meaning). This election has also been marked by the absence of debate, which has been compounded by the mediocrity of the media and the consequent numbing of the voters. Having lived in Trump’s America, I have a sense of déjà vu.

The French presidential campaign is marked by the absence of a collective vision and action. There is an argument to be made that the fifth republic no longer works well and needs reform. Some may and do argue for a sixth republic. The French can make many such choices without voting for Le Pen. Even if they despise Macron, his failings are not a reason to abandon core French values.

As citizens, we have work to do if we do not want to wake up to a daunting new reality on Monday, April 25. I strongly believe that France can reinvent itself. Our nation still has a role to play in Europe and on the world stage. And so do we. But first let’s vote.