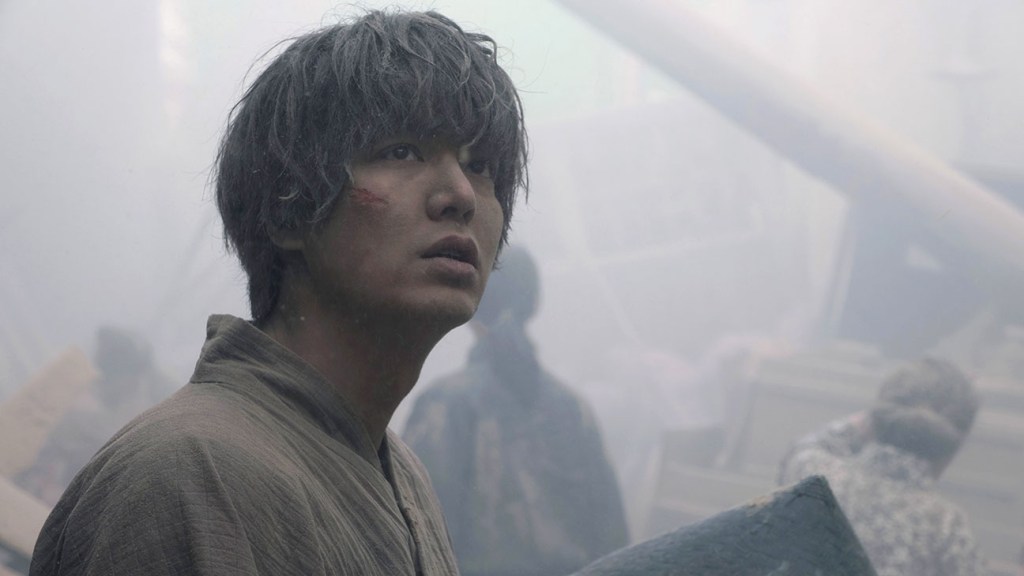 The Apple TV+ adaptation of Pachinko has taken some significant departures from Min Jin Lee’s bestselling novel of the same name, none more so than in its first season’s penultimate episode, which fleshes out and in many ways creates a new backstory for Hansu, the mysterious and powerful character played by superstar Lee Minho.

Whereas the rest of the series alternates back and forth between protagonist Sunja’s life as a young Korean woman (Minha Kim) living under Japanese imperial rule in the 1930s and her latter days as a grandmother (Yuh-Jung Youn) in boomtime 1980s Japan, “Chapter Seven” takes place entirely in Yokohama in 1923. That timestamp might tip off certain audience members to the cataclysmic event that transpires during the episode: the real-life 7.9 earthquake that killed more than 100,000 people, including Koreans living in the area. As depicted in the episode and described in its epilogue, in addition to falling casualty to the quake itself, many Koreans were also blamed for post-quake destruction and killed by Japanese vigilantes in the aftermath.

As viewers learn, living through and bearing witness to these traumas transformed Hansu from a humble tutor devoted to his single father to the poised, cold businessman who seduces Sunja a decade later. Lee, 34, spoke with The Hollywood Reporter about the significance of the episode in forming his character and how Hansu compares to the leading man roles that made him one of the most beloved celebrities throughout Asia.

This interview was conducted with a Korean translator and edited for length and clarity.

This episode, which explores Hansu’s past, is completely original to the show. Did you already know there would be this addition to the character’s story when you auditioned? How did you feel about having an episode all to yourself?

I was not aware of it going into the audition at first. I believe I read the script up to episode 4. As if putting puzzle pieces together, it felt like the character of grown-up Hansu was coming together to completion. I was able to resonate with him about why he was being so realistic and living a life without looking back. These thoughts have helped me to add more dimensions to the character.

And I had pressure to carry on with it, since the episode deviated from the main story.

Were you able to shoot the show chronologically – in other words, did you get to play younger Hansu first? How does the shooting order affect your character preparation as an actor, if it does?

We could not film the scenes in order since we were filming in two different countries, Canada and Korea. So we took turns filming younger Hansu and older Hansu. It was hard to portray Hansu of different ages, but he had extremely different personalities in each era, so it helped me to build a solid foundation for his character.

What kind of research did you do for this role, especially about the 1923 Yokohama earthquake and the lives of Koreans living there at the time?

I did my own research based on the script and the novel. I watched many clips that recreated the historical backgrounds of that time, documentaries regarding earthquakes and read many articles about Koreans who lived in that era.

In this episode, Hansu speaks in three languages, experiences emotional trauma and also deals with several action sequences with a lot of dangerous-looking practical effects. What was the most challenging part of shooting this episode?

The most challenging part was the portrayal an energetic young boy. I wanted to portray this young boy whose eyes are glistening with curiosity and aspirations, but it was not an easy task. Speaking different languages certainly was quite challenging, but I figured that Hansu would not be fluent either since he is in the early stage of learning those languages, so it wasn’t too pressuring.

You’ve been a leading man for a long time, which means that even when your characters have flaws, they are still the one that the audience is rooting for. Hansu plays a different role in the story. He’s not supposed to be the hero, so do you approach him any differently from your other characters?

I don’t think there is a big difference from other characters I’ve played before. I always try to stay true to each character I play and be authentic for my audience. With that said, I consider Hansu as a villain generated by the tragedy of desperate times. Therefore, I tried to create a character who lives his life fully committed to his own logic and value.

With such enduring success all over Asia, why were you interested in exploring this particular Hollywood project?

This project really hit different. It narrates stories of Asians, but I think the story applies to anyone living in this era beyond race, ethnicity and nationality. It is a powerful story that anyone could relate to. The character of Hansu drew me in a lot. Fortunately, I was offered to do an audition for a role, and I am beyond grateful to be able to do my first Hollywood series.

In addition to all your experience in Korean TV and film, you’ve also shot a Chinese-Korean co-production (Bounty Hunters). How did shooting Pachinko – an American production – compare with your past experiences?

No matter where filming takes place, what happens on the set seems no different wherever you are at. But depending on the size of the budget, I get to face new experiences and opportunities that thrills me. Other than that, I usually think about how to portray the scenes better. And that is why being with Soo Hugh, the showrunner, was very meaningful to me in that sense. Normally screenwriters don’t come to the studio in Korea, but for this particular show, I got to have a lot of conversations with her, and I was able to transfer the energy I got from her to a great synergy.