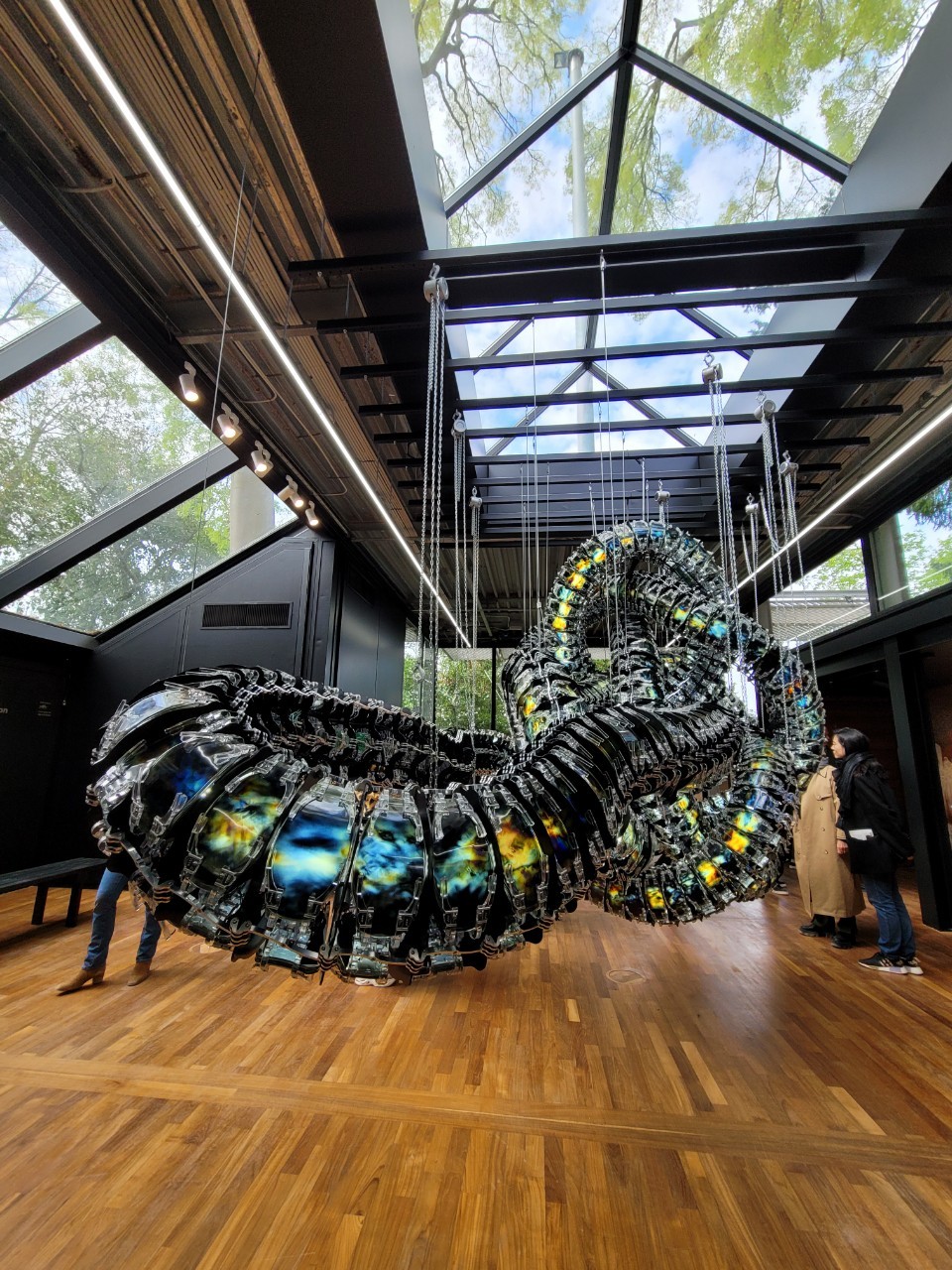 VENICE, Italy — As the 59th Venice Biennale kicked off Wednesday, 80 national pavilions unveiled their shows at the Giardini, a waterfront park located on the eastern edge of Venice, bringing art that resonates with the world today.

The opening of the international art exhibition, which was delayed a year due to the pandemic, drew art-craving crowds waiting in long lines to enter the park.

Entering the Giardini, one may notice a huge change at the 59th edition of the art exhibition — an empty Russian Pavilion that fell silent after artists and the curator voluntarily resigned from the prestigious art show in condemnation of Moscow’s invasion of Ukraine.

The Korean Pavilion, sitting on a small hill overlooking the sea, opened with the theme “Gyre,” featuring six works by artist Kim Yun-chul including fluid and chromatic kinetic installations. The pavilion space and the works together form another massive work, interacting with the outdoor space through windows and the open door at the back that leads to a view of the ocean. As the theme implies, the space seems to expand infinitely, generating a vortex.

Speaking to the press at the Korean Pavilion, curator Lee Young-chul said the theme was inspired by the first line of “The Second Coming” by Irish poet William Butler Yeats (1865-1939): “Turning and turning in the widening gyre/The falcon cannot hear the falconer.”

In a small room inside the pavilion is an installation of a muon particle detector, “Argos – The Swollen Suns,” that stands tall, creating a sound as if it were sucking in the air. Muons are particles that are created when cosmic particles collide with Earth’s atmosphere. The installation detects muons in real time and sends signals to other kinetic installations at the site — “Impulse” and “Chroma V” — triggering their movements.

“Art is the only sphere where we can be free from correct answers or interpretations. We have the freedom to interpret the works in our own way. It is important that the viewers perceive the works with the senses. That is one of things I pursue (as an artist),” Kim said.

To install “Argos – The Swollen Suns,” part of the ceiling structure was removed for the first time since the pavilion opened in 1995, when South Korea became the 26th country to have a permanent pavilion at the biennale.

“It was important to connect the outside world to the inside world. What surrounds ‘Argos – The Swollen Suns’ is also part of the work. The whole space breathes in and out,” curator Lee said. “The swollen sun is a sun that has lost its power. Absoluteness has scattered.”

Visitors to the pavilion first encounter “Chroma V,” a kinetic installation of a 50-meter-long parametric structure, reminiscent of fish skin. The 382 cells are made of highly transparent laminate polymers that give a space age-like metallic sheen to the work. The internal kinetic device causes the microscopic deformation of the polymer layers on their surface, allowing them to change their brightness and color. The kinetic work reads signals that are generated by “Argos – The Swollen Suns.”

While Kim leaves it up to the viewers to interpret his works, the concept of gyre can resonate today in many ways, as the gyre in Yeats’ poem connotes how history flows and a new era arrives in a cyclical process.

“We are experiencing the pandemic, a war in Ukraine — the Russian Pavilion is closed. The turmoil that we are going through is part of the motion of the gyre,” Kim said.

Installation artist Kim is an electroacoustic music composer and has explored magneto hydrodynamics, the study of the dynamics of electrically conducting fluids, which is an entirely new field of art.

On the wall are drawings Kim did using chalk, doodles that show the original ideas that he worked with when creating the massive installations. “I do a lot of sketches. I did not intend to do it (wall drawings) for the biennale, but I wanted to give it a try on the wall,” he said.

The 59th International Art Exhibition of Venice Biennale with the title of “The Milk of Dreams” runs through Nov. 27 at two main venues — the Giardini for national pavilions and the Arsenale where the international exhibition curated by Cecilia Alemani is held with 213 artists from 58 countries. The artists at the international exhibition include two Korean interdisciplinary artists, Lee Mi-re and Jeong Geum-hyung, whose new works “Endless House: Holes and Drips” and “Toy Prototype,” respectively, are on display.