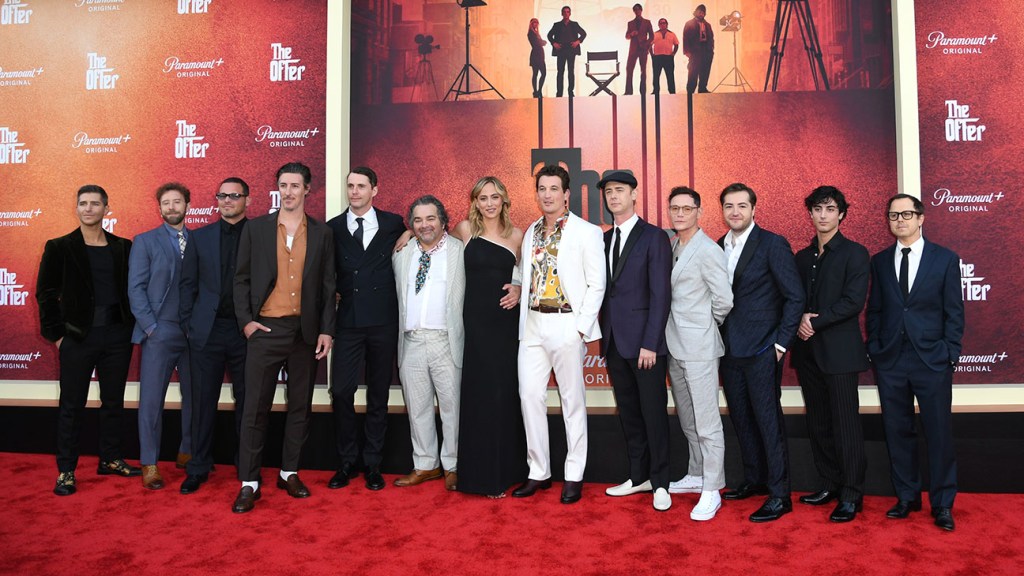 Fifty years after The Godfather’s 1972 debut comes the untold story of the movie that almost didn’t get made. Told from the perspective of producer Al Ruddy (played by Miles Teller), The Offer chronicles the journey of what it took to make the film that would go on to become widely considered as one of the greatest American films of all time.

On Wednesday evening, the team behind The Offer gathered at Paramount Studios, just steps away from former Paramount executive Robert Evans’ real-life office. With the help of Evans (Matthew Goode), Francis Ford Coppola (Dan Fogler) and his assistant Bettye McCartt (Juno Temple), Ruddy battled several obstacles along the way to making The Godfather — most notably, crime boss Joe Colombo and the American Mafia.

“There’s so many wonderful behind-the-scenes stories about how hard it is to get anything made in Hollywood, let alone something good,” showrunner Nikki Toscano told The Hollywood Reporter on the red carpet. “To have this story that had such a unique perspective and such life-and-death stakes attached to Al Ruddy’s dilemma, it was really fascinating to be a part of and fascinating to write.”

Ruddy himself also served as an executive producer on the show, though the Oscar winner was not in attendance at the premiere.

“Al has been incredibly supportive since day one,” said Toscano of Ruddy’s involvement. “[Writer] Michael Tolkin interviewed him very early on and did about a week or two of full-fledged interviews, just talking to Al about the heart of the stories that he told and how exactly we were going to flesh them out in the context of the character arcs that we had built in the writer’s room. But he was incredibly supportive. He watched dailies, he watched cuts, he gave notes.”

When it came to casting these real-life figures and icons, Toscano and Rothberg shared that it was a meticulous process to find the right people to do the job.

“I think our biggest challenge and something that Russell and I spoke about a lot was the fact that we have a lot of people that are playing real-life people. And so choosing people from tapes or auditions that were not direct imitations of those people, [but rather] people that were truly capturing the essence and the soul of these characters.”

“There’s a lot of ‘actors’ actors’ in this, you know. It’s not like star, star, star, star star. It’s people who, for a long time, I would have killed to work with them, and then suddenly, all 10 of them — people that I love and want to work with [who] come along at one time in the same project,” said Goode about the show’s ensemble cast. “It’s one of those sort of delusions of grandeur where you kind of go … the script’s amazing. It’s Michael Tolkin and Nikki [Toscano]. It’s just delicious, the prospect [of it]. But terrifying, absolutely terrifying.”

From playing real-life characters like Ruddy and Francis Ford Coppola to mega icons like Frank Sinatra and Marlon Brando, the cast felt the pressure of getting their portrayals just right. Anthony Ippolito, who plays Al Pacino in the show, studied The Godfather actor in the time leading up to Pacino’s Academy Award-winning performance.

“I’ve looked up to him as an actor for pretty much my whole life ever since I got into acting,” Ippolito said of Pacino. “He’s a beautiful actor, and super talented and trying to fill those shoes is kind of impossible. So I just tried to do the best that I could. I looked into as much old footage as I could find with him from that time period. It was tough because there’s not that much stuff with him from that time, because he wasn’t the Al Pacino we know today — The Godfather is part of what made that happen.”

He continued, “I’m kind of terrified of [him] seeing it because he’s someone I’ve looked up to, and I respect his work. It’s crazy, he’s watching me act as him. I would be intimidated to have him watch me act at all, period.”

For cinefiles and Godfather superfans out there, director Adam Arkin left a few nods to Coppola’s original film in episodes along the way. “From a directing standpoint, whenever possible, I tried to find little Easter eggs in the way something might be framed or a reference, along with those that existed in the script, to kind of tip one’s hat to the original film,” Arkin said. “I don’t think there was an attempt to do any kind of out-and-out imitation of the film. But both of [our DPs Sal Totino and Ellie Smolkin] tried to honor the look and the feel of a classic approach to filmmaking.”

Added co-star Patrick Gallo, “Making a film is unbelievably challenging, to an extent that is almost indescribable. It’s not just you go there, you shoot some stuff. Everybody’s there, your actors are there, you do it, and then you leave. There’s so much that goes into making a film and making a piece of art. And I hope that [audiences] take that away from it. That they go, ‘Wow, I watch it in an hour-and-a-half, two hours, but I didn’t realize that so much passion and life and breath goes into making that piece of art.’ And that it is art.”

The Offer premieres April 28 on Paramount+.