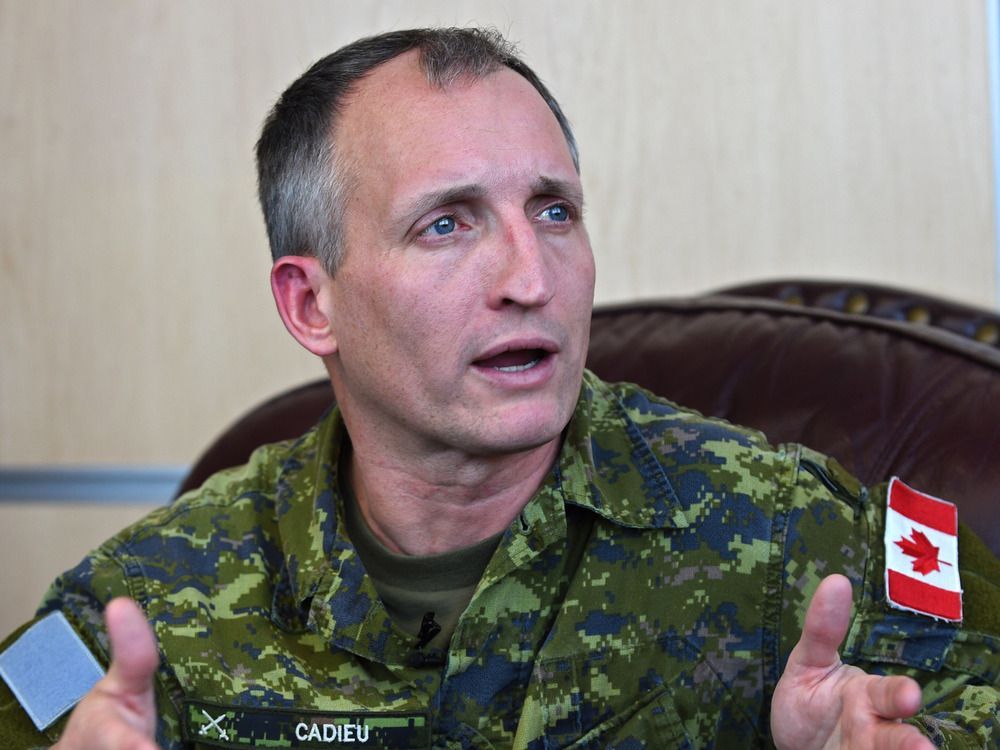 A retired Canadian Forces lieutenant-general under investigation for alleged sexual misconduct is now in Ukraine.

Trevor Cadieu left the Canadian military on April 5, according to the Department of National Defence. He travelled to Ukraine shortly after with the intention to volunteer for that country’s military which is battling a Russian invasion, multiple defence sources confirmed to this newspaper.

The Canadian Forces National Investigation Service which is investigating Cadieu originally had difficulty contacting the retired lieutenant-general but has since established communication with him.

Senior Canadian military leaders were briefed about Cadieu’s decision to travel to Ukraine, according to sources.

Cadieu did not respond to requests for comment from this newspaper.

But Cadieu’s alleged victim said she cannot believe that an individual under police investigation was allowed to leave the country. “I find it shocking,” the woman, who asked not to be identified for fear of retribution, said in an interview with this newspaper Thursday. “What is going on here?”

She alleged the Canadian Forces hid Cadieu’s retirement from the public. That retirement was only revealed by CBC on Wednesday.

Cadieu has strenuously denied any wrongdoing. The investigation into Cadieu centres around his and another officer’s alleged actions at the Royal Military College in 1994.

DND has yet to provide comment about Cadieu’s decision to travel to Ukraine.

Cadieu was to have taken over command of the Canadian army last September but that was derailed after military police began an investigation into what they termed “historical allegations.”

Cadieu is a popular army officer and the police investigation into his actions has prompted social media comments of support for him.

In contrast, his alleged victim has faced comments posted online about her mental state and her alleged motives. Similar comments have been made during official meetings at the Department of National Defence headquarters, this newspaper has confirmed through multiple defence sources.

The woman said she is still trying to deal with the “institutional betrayal” she has faced from the Canadian Forces and DND. She pointed out that DND and the military originally distributed Cadieu’s statement to national news outlets in which he denied any wrongdoing. She took that as the military and DND leadership officially indicating their support for the lieutenant-general despite an ongoing investigation.

Foreign volunteers have flocked to Ukraine to help that country battle invading Russian forces. Ukraine has limited its acceptance of personnel to those with military experience.

But the Liberal government has allowed Ukraine to actively recruit retired military personnel in Canada. Defence Minister Anita Anand has said the Liberal government views it as a personal choice if a Canadian wants to fight for Ukraine. But she has noted the situation in Ukraine is extremely dangerous. “It is certainly their own individual decision as to whether they wish to do so,” said Anand. “My responsibility, our responsibility as the Canadian government, is to make sure everyone knows that the situation in Ukraine is extremely dangerous, extremely concerning and that’s the information we are providing.”

Russia has labelled such volunteers as mercenaries. It has captured a number of foreign soldiers but it is unclear what will become of those individuals.

In a July 11, 2021 email to his alleged victim, Cadieu acknowledged the harm he had caused her. Cadieu wrote that Chief of the Defence Staff Wayne Eyre had been informed by other officers about the victim’s allegations. “The CDS can’t ignore what he’s been told,” Cadieu wrote to the woman, a former Canadian Forces member. “Naturally, as painful as it is to write this, the CDS needs to makes (sic) decisions about my ability to continue to serve.”

Cadieu asked the woman if she would be willing to meet him in what he called a “facilitated engagement.”

“I’m not looking to challenge your claim,” Cadieu wrote to the woman. “It would allow me to acknowledge what you’ve endured and any harm I’ve caused in your life.”

In a previous interview with this newspaper, the alleged victim said she had been trying to move on with her life and originally had no intention to go to military police.

But when the alleged victim received the unsolicited messages from Cadieu and from another officer questioning what she intended to do about the allegations, she said she felt bullied and decided to contact an official in Eyre’s office. According to the alleged victim, that was done July 14, in a phone call that lasted several hours involving an official in Eyre’s office. The woman said her intention at that time was not to file a formal complaint against Cadieu but to raise her concerns about the officer since he was being considered as the new army commander.

The alleged victim later learned that Eyre was proceeding anyway to install Cadieu as the new head of the army. As a result, the woman went to the Canadian Forces National Investigation Service on Sept. 4, 2021 to provide a statement and file a complaint against Cadieu.

The Canadian Forces and DND insist that Eyre was never informed of any issues about Cadieu until his meeting with military police in September. Once he was told of the allegations on Sept. 5, then Eyre acted immediately, according to the DND.

Cadieu responded to this newspaper that, “the information in your email to me contains inaccuracies and, to the best of my knowledge, is unrelated to the allegation that the NIS is investigating, which I learned about on September 5, 2021. At this time, it is important for all involved to respect the investigative procedures and allow due process to occur.”