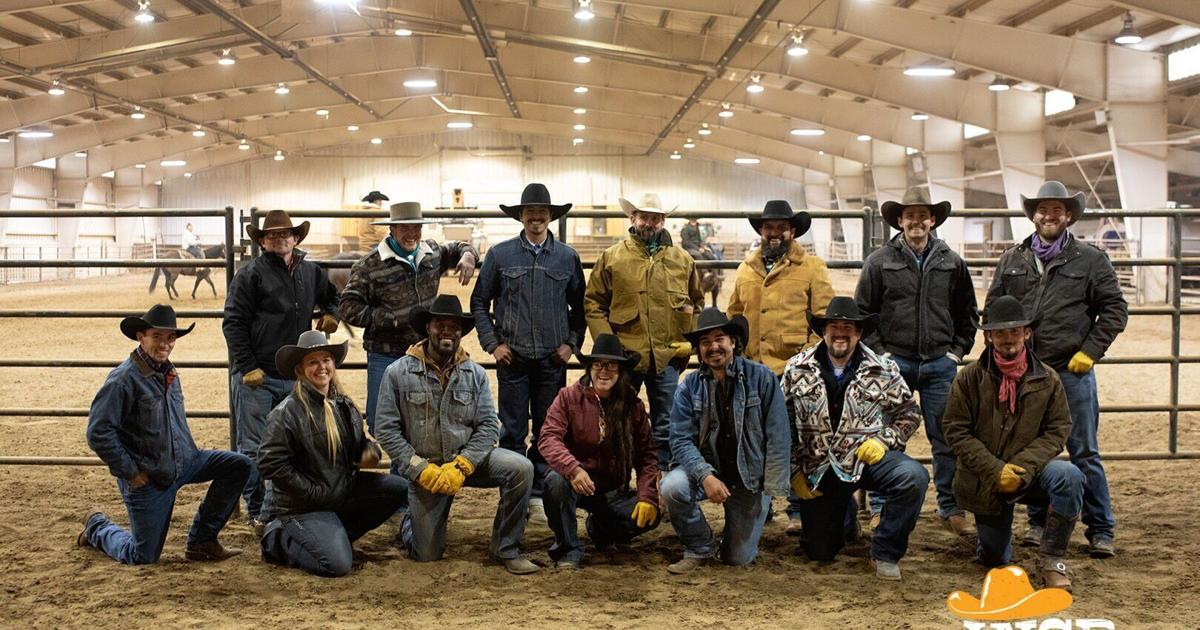 Stephen Yellowtail has been riding horses since before he could ride a bike. He “grew up on horseback,” he said, noting that he’s been doing it as long as he was “able to hold my head up and hold on.”

That training has come in handy. Not just because Yellowtail, 28, now owns and operates the ranch he grew up on near Wyola, Montana, but because he’s one of 14 contestants on the new season of “Ultimate Cowboy Showdown,” a reality show that pits cowboys against each other on various challenges to see who can hang in the saddle the longest. Winner gets bragging rights, a custom belt buckle and a herd of cattle worth at least $50,000.

The show airs on INSP, a channel originally founded in 1978 by Jim and Tammy Faye Bakker that nowadays shows vintage westerns, episodes of “Gunsmoke” and “The Waltons” and original programing like “Ultimate Cowboy Showdown.”

Yellowtail is on season 3, which premiers today at 10 p.m. Mountain Time.

The show is hosted by country singer Trace Adkins, who Yellowtail admits can be a little intimidating. “The first thing you notice about him is his stature,” Yellowtail said of the 6-foot 6-inch Adkins. “He’s got a real deep voice and he’s all business. But once the cameras are off, he’s a very incredible person.”

That sentiment echoes what Yellowtail had to say about the show in general — daunting but rewarding. “It was way more challenging being there in person as opposed to sitting in the chair the past two seasons watching,” he said. Yellowtail had been an avid fan of the show, and decided to apply after seeing an advertisement asking “Do you have what it takes?” airing after an episode.

“They do a good job of making it a challenge and testing your skills and knowledge,” he said.

The show was shot over 20 days last November on the massive Powderhorn Ranch southwest of Douglas. “They’re top notch,” Yellowtail said. The facility, only around three hours from Yellowtail’s home of Wyola, was “very similar terrain and landscape to what I’m used to. So luckily I was pretty comfortable.”

And despite the fact they were competing, Yellowtail said he found a sense of camaraderie amongst the contestants. “I became friends with most of them,” he said, “I still talk to them very frequently.”

Yellowtail said he treated the challenges like they were a regular day’s work. “When I’m working at home,” he said, “I’m still looking out for others and seeing if someone else needs help, and keeping other people’s safety in mind.”

He’s had a lot of experience with a regular day’s work. The ranch he owns and works on is the same one he grew up on. He’s the fourth generation to tend to that land. “I’m running cattle on the same grass my great-grandfather ran his on.”

He ranches with his father, and together the pair run around 500 head of cattle on their 12,000 acres.

He was also standout basketball player at Tongue River High School in Dayton, Wyoming and played Division II ball at South Dakota School of Mines in Rapid City. He graduated with a degree in engineering, a potentially lucrative field.

But it didn’t stick. He returned home to the family ranch. “I just didn’t like being indoors,” he said. “The Crow Reservation is, I think, some of the most beautiful scenery in the country, if not the world. And it’s some of the best grass country. It’s just one of the best places on earth to run cows and make a living that way.”

With that background, Yellowtail is a perfect candidate for a show trying to find the “ultimate” cowboy. “It’s a little cliché,” he admits, “but being a cowboy is born into you. And for me, it absolutely was. From the time I was a little kid, that’s all I wanted to do.”

He’s felt the call of the land since he was young. “I always wanted to tag along with my dad,” he said of his childhood.

That family that Yellowtail prizes is growing. He and his longtime girlfriend have an almost two-year-old son, with another on the way this summer.

That alone could keep most folks busy, but not Yellowtail. “Ultimate Cowboy Competition” isn’t the only thing he is doing to branch out from ranch life. He also has a popular Instagram account @syellowtail, which has over 3,600 followers. The account started off as fun, but recently he’s realized the branding power of it. He’s still got cattle to run, horses to sell, and dabbles in leatherwork. But, he said, “I’m digging through trying to find different avenues, and social media is a powerful tool for that.”

He also recently returned from a stint doing stunt work on “1883,” Paramount’s spinoff of the wildly popular “Yellowstone” that follows the Dutton family through the Great Plains on their way to Montana. He’s friends with actor Martin Sensmier, who convinced Yellowtail to be his stunt double.

He was in Texas shooting for a month and a half. And it’s something he’d like to do more of. “Western films are making a big comeback,” he noted, “and there’s a big need for Native American riders. And fortunately for me, I’m both.”

But for Yellowtail, his approach to being a cowboy isn’t all about him. “My job as a cowboy,” he explained, “is taking care of cows. I’m making sure they have a very comfortable living — that they have shelter, that they have the health care they need. It’s the same thing with my horses.”

He thinks that lifestyle translates to people. He encourages “being neighborly. And when you see someone in need, you extend the hand and help them out.”

“For me,” he said, “the biggest thing about being a cowboy is putting others first.”