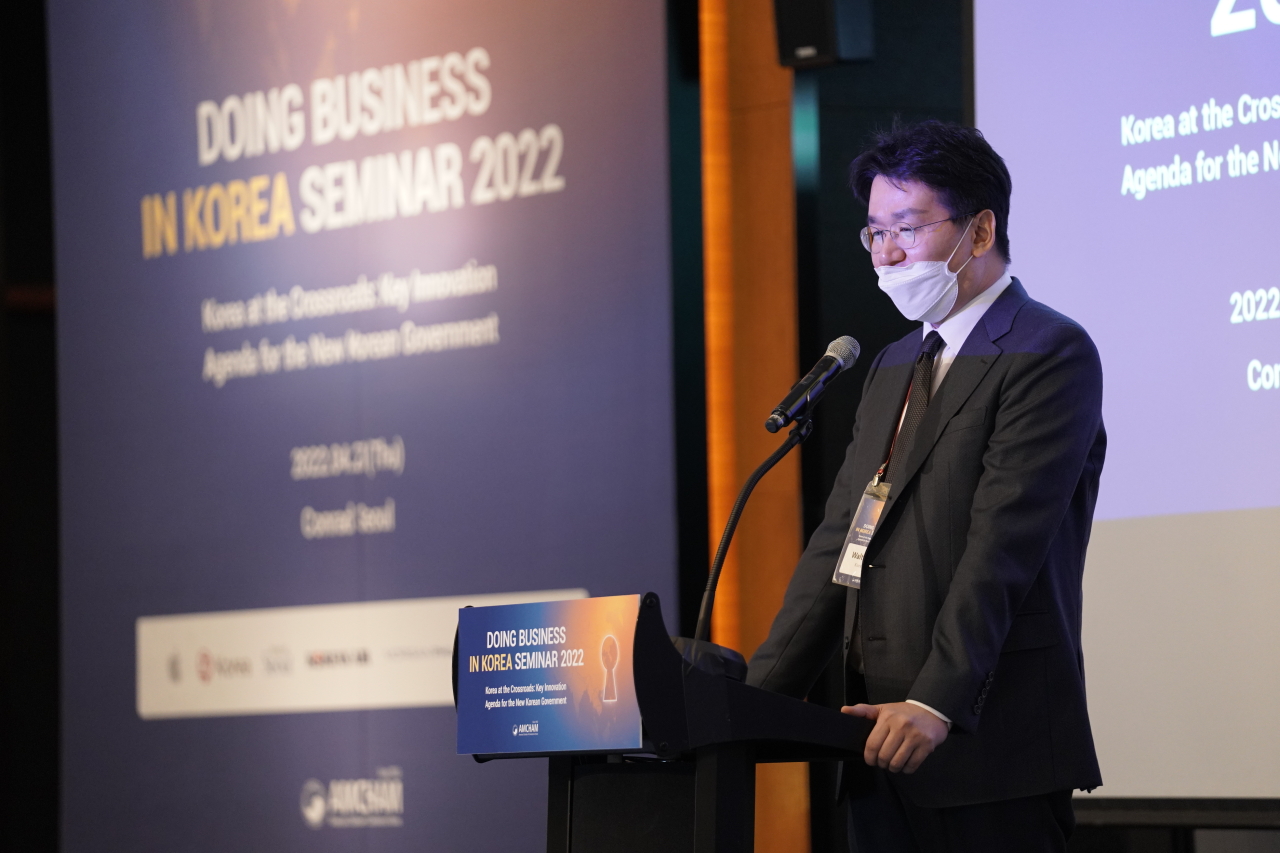 The head of South Korea’s largest air carrier said Thursday that the company‘s acquisition of its domestic rival Asiana Airlines will contribute to enhancing the bilateral economic relationship between South Korea and the United States, expressing hope for Washington’s approval of the merger.

“We are committed to increasing our activity in the US given the positive environment and we will continue to be a major contributor to the US-Korea economic relationship,” said Cho Won-tae, chairman of Hanjin Group, parent company of Korean Air, at a seminar hosted by the American Chamber of Commerce in Korea.

“Subsequent to the onslaught of the pandemic, we have increased our cargo capacity to help relieve the supply chain issues facing both economies by increasing our cargo capacity to the US to more than 900,000 metric tons in 2021, making Korean Air one of the largest cargo carriers to the US and contributing greatly to economic activity in the US,” he added.

The chief of the national flag carrier emphasized Korean Air’s contribution to the US economy, saying that Korean Air alone has created over 75,000 jobs in the US, and has purchased over $34 billion worth of US aircraft and parts.

Referring to the process of acquiring Asiana Airlines, Cho said he looks forward to expanding the firm’s investment in the US after its acquisition of the second-largest domestic air carrier.

“Korean Air will be able to increase its contribution to the US economy and prevent the losses to both nations that would be caused if Asiana Airlines closes down,” he added.

Korean Air has received approval from Korean antitrust authorities to proceed with the acquisition of Asiana Airlines, and is now awaiting approval from the US, the European Union, Japan, China, the United Kingdom and Australia.

During the seminar, AmCham Chairman and CEO James Kim also suggested priority reform measures that the incoming Yoon Suk-yeol administration should examine during the seminar.

“Last December, AmCham had the pleasure of hosting then-presidential candidate Yoon Suk-yeol. President-elect Yoon then shared with us his vision to transform the Korean economy into a digital powerhouse driving cutting-edge technologies and innovations. AmCham fully supports his vision,” Kim said.

At the event, government leaders including Foreign Minister nominee Park Jin and acting US Ambassador to Korea Christopher Del Corso were also present.

“We are looking for partners like Korea to join us in leading cooperation in digital and innovative technologies, supply chain resilience and clean energy, through the newly announced Indo-Pacific economic framework. This is why it is important that they rely on regulatory frameworks with global standards that will fulfill innovation and economic expansion,” said Del Corso.

“South Korea is considered one of the most attractive foreign investment destinations in the world, and the government is trying to maintain that status. For that, easing regulations on foreign investment is an important factor to be considered. We are trying to cooperate with related ministries to transparently and reasonably ease such measures which are under discussion with the new government, and will be announced soon,” said Jung Jong-yung, director general for cross-border investment policy from the Ministry of Trade, Industry and Energy.

He added that while there may be some differences between the current and incoming governments on changing foreign investment-related regulations, they share the objective of making Korea a good country to do business in.

According to the 2022 AmCham Business Environment Survey in which around 800 AmCham members took part, Korea was selected as the second most preferred destination for regional business headquarters in Asia, trailing Singapore at the top spot.