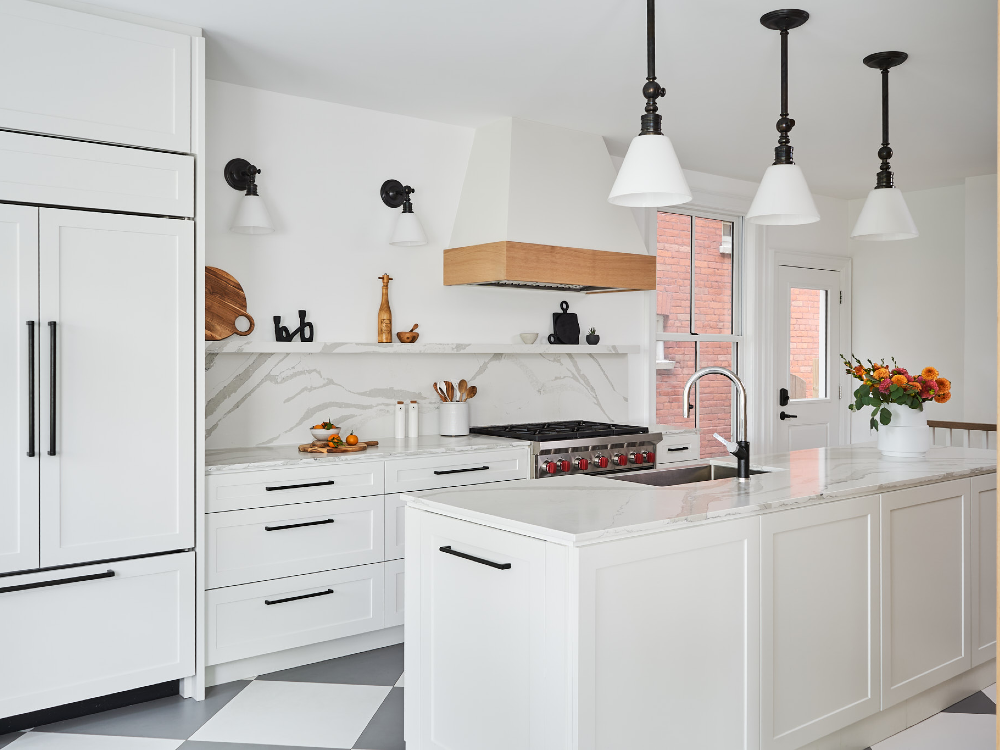 Historic homes are heavy on charm — except when it comes to living in them. Where to stow the winter coats, or to spread out the parts of a paella?

A pair of professionals were living this reality. The family of five with school-aged twin daughters, a son and a cat, were itching to gain more space from their 2,500-square-foot 19th-century home in Leslieville where they had lived for a decade.

The husband’s Jamie Oliver-level skills were out of sync with the dark and dinky kitchen, and the tween girls had grown out of their shared bedroom.

Recalibrating rather than relocating felt right, since the couple adored the house’s old-timey details — its peaks and porch and picket fence. White, of course.

“This was the last original log home in the area. Everything else has been modernized, rebuilt or renovated,” says Evelynn Ratcliffe, co-partner with Andrew Black of Alair Homes Forest Hill. The builder was enlisted for the nine-month-long project, along with interior designer Mirelle Goren of Mirelle Goren Interiors.

Built in 1886, the house belonged to an east-end  developer who lived there while overseeing his horse-and-carriage crew as they toiled away on surrounding houses, says Black. Over time, however, its façade showed the effects of Canadian winter, with its weathered cedar shingles, dingy siding and peeling pillars.

Its newest inhabitants wanted to “restore the original home, but they needed more square footage to accommodate their lifestyle and children,” says Ratcliffe. “They wanted a bigger kitchen without having to gut and remodel the entire house.”

And so, a 300-square-foot rear addition was devised to expand the kitchen and add a mudroom.

To deftly tie new and original details together, the white siding on the front of the house is carried to the rear, where a trio of sash windows hit a nostalgic note and brighten the kitchen.

Above, a new rooftop deck off the second-floor bedroom has “a white picket railing to echo the architectural style out front,” says Black.

The house’s façade was freshened by replacing some of the cedar shakes and the roof, adding a gate and a new driveway.

“The exterior siding was restored to avoid unnecessary costs and trips to the landfill,” notes Ratcliffe.

The quaint dining and living rooms on the main floor were left untouched, save for fix-ups to the crumbling plaster.

Below, a dreary low basement got a boost to make it liveable. “It was a challenge since we effectively removed the original foundation and held up the house with shoring and supports to then put in a new one,” says Black. In the process, ceilings were bumped to nine feet. (Underpinning wasn’t possible because the foundation was a lemon.)

The transformation also includes bedrooms for each daughter (plus a guest room), a rec room, a hidden laundry room and a snazzy bathroom with twin vanities.

It’s accessed “through a salvaged door removed from the back of the house,” says Goren. The designer painted it periwinkle and put it on rollers. “It’s nice for a kid’s bathroom to have a sense of whimsy,” she says. “Marrakesh floor tile also brings the space to life, and in the shower we ran subway tile in a cool pattern.”

In the kitchen, which has a breakfast nook, Goren mediated the couple’s styles. “He’s into the contemporary; she’s more classic. So we went with shaker doors on one side and flat-panel on the other,” she says of the millwork. Sourced through AyA Kitchens and Baths, the floor-to-ceiling oak pantry with display cubbies wraps to merge with the shipshape mudroom.

The cabinet mashup could have gone badly. Countrified farmhouse kitchens don’t normally jive with a sleek aesthetic. But, like tempering eggs, the trick is to slowly ease each side into it.

“We are seeing a trend towards embracing mixed materials and finishes in kitchen design, so why not blend the cabinet styles? The black handles on both styles of cabinetry create a sense of cohesion,” says Goren.

Another trend in the kitchen is the stone display ledge, made of quartz like the backsplash. Zipping above the countertop and the oven, the elevated perch is for leaning artwork and other pretty things. Sure, it wasn’t the thing in the 19th century, but it works.