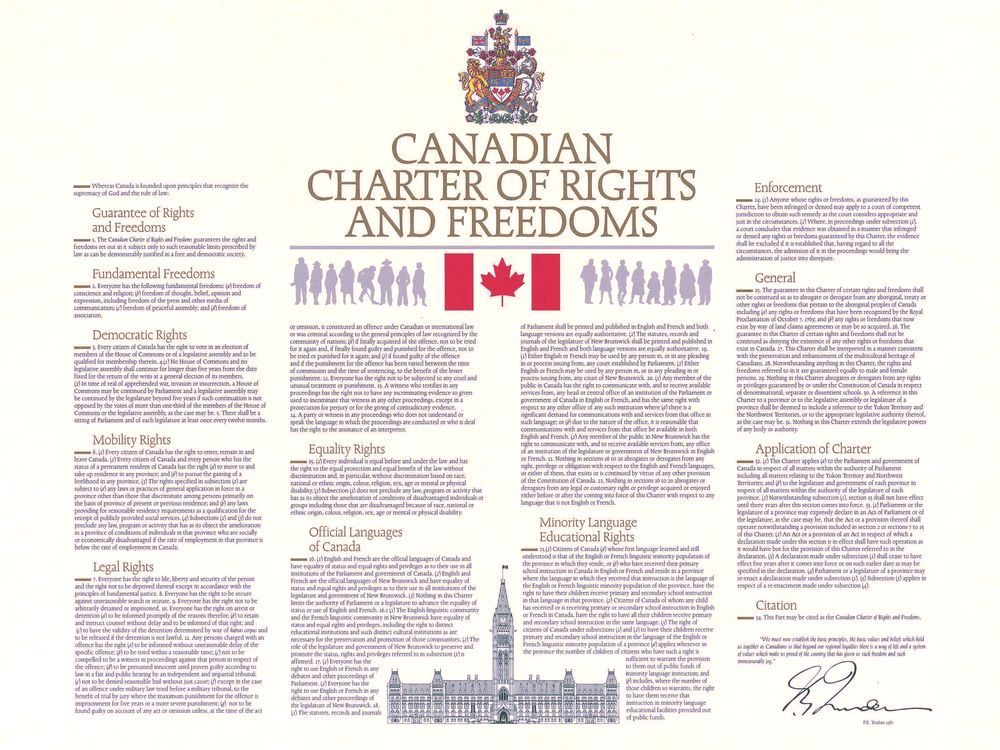 A visitor to Washington can walk right up to the U.S. Constitution, the Declaration of Independence and the Bill of Rights.

Those documents, yellowed with age, contained in special cases and radiating sacred authority, are on display in the Rotunda for the Charters of Freedom in the National Archives Museum.

“There are a whole slew of documents, ranging from the Hudson’s Bay Company Charter to the 1763 Proclamation to the ‘numbered treaties’ of the 1870s, that have never been displayed in Canada, and it’s a real shame,” said Patrice Dutil, a fellow at the Macdonald-Laurier Institute, in an email. “Museums should be displaying them creatively, triggering the kind of historic discussions people are craving in this country.”

Sunday marks the 40th anniversary of the signing of the Proclamation of the Constitution Act, 1982. Queen Elizabeth II, then-prime minister Pierre Trudeau, Jean Chrétien, the justice minister at the time, and André Ouellet, the registrar general, put their signatures on the document, as raindrops dripped on the page.

After that, the Constitution Act, 1982 became the law of the land, comprised of the charter, a section expounding upon the rights of Indigenous people, the somewhat vestigial Constitution Act, 1867, and others, not to mention the various common laws that help form this country’s constitutional foundation.

In the intervening decades, the charter has affected Canadians in myriad ways; it has helped guarantee rights to a fair trial, opened the door to medically assisted dying, allowed for prisoners to vote in elections, and limited the ways in which Canadians can express themselves.

Yet, Canadians cannot — as Americans can — go see their foundational documents. There can be no pilgrimage to Ottawa or Winnipeg to see the papers that protect our rights to worship as we please or associate with whom we please.

Not only is the charter, or Section 35 — concerning the rights of Indigenous people — not on display in Canada, but neither are other venerable documents, such as the British North America (BNA) Act.

There are a number of reasons for this. The first is that the Constitution Act, 1982 isn’t an original Canadian document per se. Rather, it — and therefore the charter — are parts of the Canada Act, 1982, a law passed in the United Kingdom. The originals, then, are a British possession.

Even if Canadians were able to see the original charter within the original constitution, what would it look like? What if Britain shipped the original sheaf over for display? Ottawa’s PDF of the Consolidation of the Constitution Acts 1867 to 1982 rings in at 112 pages long, parallel text in French and English, with a preamble and the old BNA Act. How would that be displayed?

James Muir, a legal historian at the University of Alberta, says these documents probably aren’t that interesting, visually speaking, unfortunately.

“By the time it’s produced in the ’80s, it’s always only produced in typescript, right? And it’s typescript on paper,” said Muir. “There’s not a very big sort of artifact, symbolic artifact…. The charter exists more often in the way we talk about it than anything else.”

The government does produce a poster version of the charter that can be downloaded or ordered, but it’s not an original document, even if it is printed on sufficiently regal parchment-coloured paper.

The BNA Act — which is on vellum, which is stretched calfskin — looks aged and radiates gravitas. But it’s also not in Canada. In 1999, the Ottawa Citizen visited Victoria Tower in London to see the original document, where it was housed in a storeroom, sitting beside An Act to Repeal the Duties of Assessed Taxes on Dogs.

“There, inside a thin, red, hard cardboard box, is a 47-page document printed on fine calfskin vellum and bound with a wrinkled red ribbon. It measures 34 by 20 centimetres, slightly larger than a magazine. After 132 years, the title page is taking on the weathered look of a pirate map,” wrote reporter Ian MacLeod.

What Canadians can see from time to time is the proclamation document. It solemnly declares Canada’s status as “an independent state,” and bears the signature of the Queen but contains none of the ringing principles elucidated in America’s foundational documents.

There are actually two copies.

The first has water damage from the day it was signed in the rain 40 years ago, and the second has a red ink splotch on it, damaged by a protester in July 1983. They have both, on occasion, been displayed in exhibitions. The raindrop copy was, for six months, ending in February 2020, on display at the Canadian Museum for Human Rights in Winnipeg.

Still, it has no permanent home. Combined, the two documents, according to Library and Archives Canada, have been displayed 18 times since 1982, for varying lengths of time. Throughout the pandemic era, they’ve been in storage.