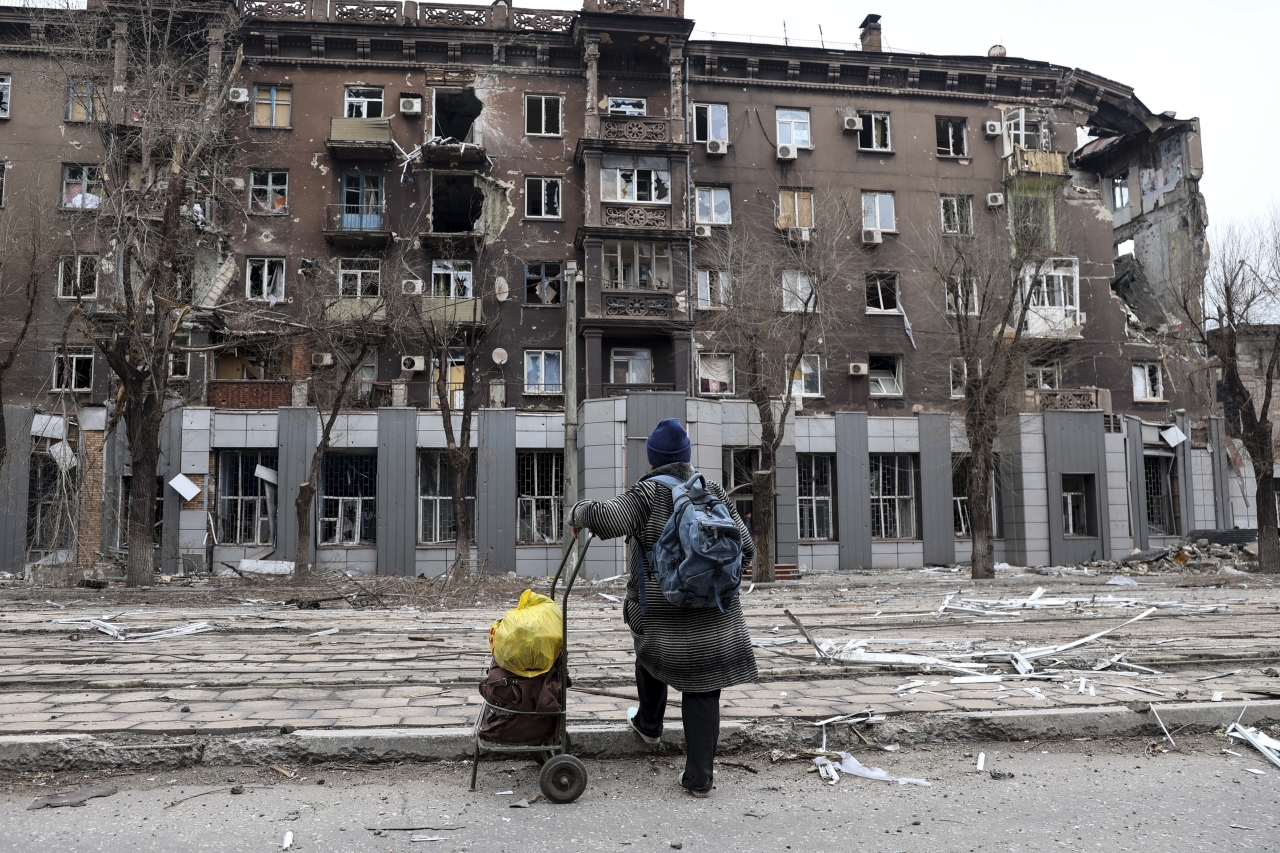 KYIV, Ukraine — The battered port city of Mariupol appeared on the brink of falling to Russian forces Sunday after seven weeks under siege, a development that what would give Moscow a crucial success in Ukraine following a botched attempt to storm the capital and the loss of the Russian navy’s Black Sea flagship.

The Russian military estimated that about 2,500 Ukrainian fighters holding out at a hulking steel plant with a warren of underground passageways provided the last pocket of resistance in Mariupol. Russia gave another deadline for their surrender, saying those who put down their weapons were “guaranteed to keep their lives,” but Ukraine remained defiant.

“All those who will continue resistance will be destroyed,” Maj. Gen. Igor Konashenkov, the Russian Defense Ministry’s spokesman, said. He said intercepted communications indicated there were about 400 foreign mercenaries along with the Ukrainian troops at the Azovstal steel mill, a claim that couldn’t be independently verified.

Seizing Mariupol would free up Russian forces to weaken and encircle Ukrainian soldiers forces in eastern Ukraine, where Russia has focused its war aims for now and is deploying personnel and equipment withdrawn from the north after the failure to take Kyiv.

In a reminder that no part of Ukraine was immune until the war ends, Russian forces carried out new missile strikes Sunday near Kyiv and elsewhere in an apparent effort to weaken Ukraine’s military capacity before the anticipated assault in the east.

After the humiliating loss of the flagship of its Black Sea Fleet, Russia’s military command vowed Friday to step up missile strikes on the capital. The Russian military said Sunday that it had attacked an ammunition plant near Kyiv overnight with precision-guided missiles, the third such strike in as many days.

Russia’s stepped-up attacks on Kyiv came after it accused Ukraine on Thursday of wounding seven people and damaging about 100 residential buildings with airstrikes in Bryansk, a region bordering Ukraine. Ukrainian officials have not confirmed hitting targets in Russia.

Kyiv Mayor Vitali Klitschko said a Saturday strike on what Russia’s Defense Ministry identified as an armored vehicle plant killed one person and wounded several. He advised residents who fled the city earlier in the war not to return.

The Russian military also claimed Sunday to have destroyed Ukrainian air defense radars in the east, near Sievierodonetsk, as well as several ammunition depots elsewhere. Explosions were reported overnight in Kramatorsk, an eastern city where rockets killed at least 57 people at a train station crowded with civilians trying to evacuate before the expected Russian offensive.

The ongoing siege and relentless bombardment of Mariupol has come at a terrible cost, with officials estimating Russians had killed at least 21,000 people. Just 120,000 people remain in the city, out of a prewar population of 450,000.

Malyar, the deputy defense minister, said the Russians have continued to hit Mariupol with airstrikes and could be getting ready for an amphibious landing to beef up their ground forces.

Capturing the city with a land area about half the size of Hong Kong’s and home to a Sea of Azov port would also allow Russia to secure a land corridor to the Crimean Peninsula, which it annexed from Ukraine in 2014.

So far, tunnels at the sprawling Azovstal steel mill, which covers an area of more than 11 square kilometers (over 4.2 square miles), have allowed the defenders to hide and resist until they run out of ammunition.

With Russia apparently poised to declare victory, Ukrainian President Volodymyr Zelenskyy said the city’s fall could scuttle any attempt at a negotiated peace.

“The destruction of all our guys in Mariupol _ what they are doing now _ can put an end to any format of negotiations,” Zelenskyy said in an interview with Ukrainian journalists.

In his nightly address to the nation, Zelenskyy called on the West to send more heavy weapons immediately if there is any chance of saving the city, adding Russia “is deliberately trying to destroy everyone who is there.”

Austrian Chancellor Karl Nehammer, who met with Vladimir Putin this past week in Moscow _ the first European leader to do so since the invasion began Feb. 24 _ said the Russian president is “in his own war logic” on Ukraine.

In an interview on NBC’s “Meet the Press,” Nehammer said he thinks Putin believes he is winning the war and “we have to look in his eyes and we have to confront him with that, what we see in Ukraine.”

Nehammer said he told Putin what he saw during a visit to the Kyiv suburb of Bucha, where more than 350 bodies have been found along with evidence of killings and torture under Russian occupation, and “it was not a friendly conversation.”

Like Mariupol, the northeast city of Kharkiv has been an ongoing target of Russian aggression. Mayor Ihor Terekhov said three people were killed and 34 wounded Saturday.

One explosion believed to have been caused by a missile sent rescue workers scrambling near an outdoor market. The workers said one person was killed and at least 18 wounded. Local officials said 10 people died in rocket attacks on residential areas of Kharkiv on Friday.

Nate Mook, a member of the World Central Kitchen NGO run by celebrity chef Jose Andres, said in a tweet  that four workers in Kharkiv were wounded by a strike. Andres tweeted that staff members were unnerved but safe.

Zelenskyy estimated that 2,500 to 3,000 Ukrainian troops have died in the war, and about 10,000 have been wounded. The office of Ukraine’s prosecutor general said Saturday that at least 200 children have been killed, and more than 360 wounded.

Despite the war still raging, Zelenskyy spoke in his nightly address about Ukraine’s plans for a memorial to honor the dead and the sacrifices of the Ukrainian people.

One proposal is to tell the story of the destroyed bridge near the capital that people used to escape, “to remind all generations of our people of the brutal and senseless invasion Ukraine has been able to fend off,” he said. (AP)