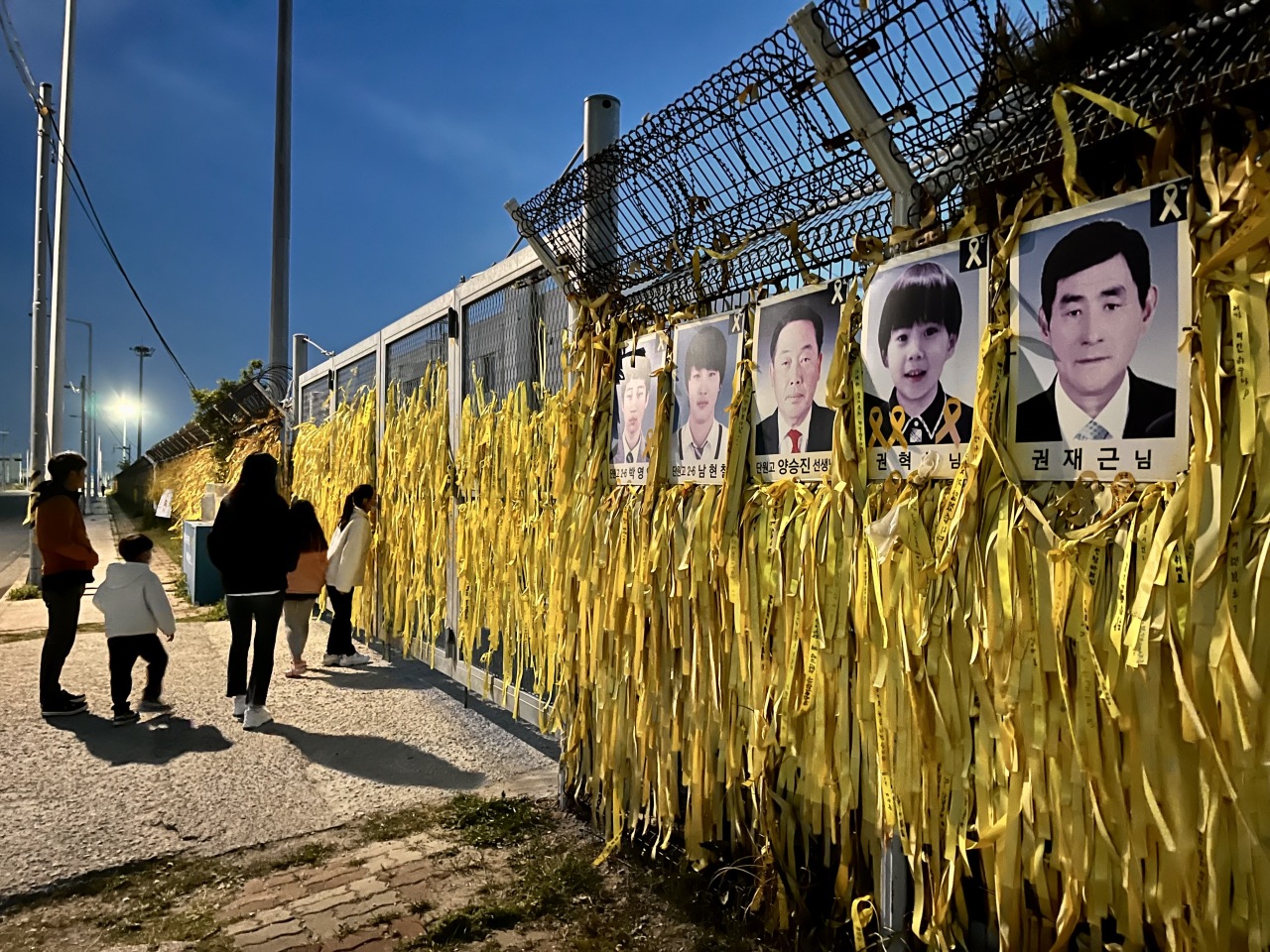 ANSAN, Gyeonggi Province/MOKPO, South Jeolla Province — Ceremonies were held across the country on Saturday to commemorate the eight years since the April 16 sinking of Sewol ferry.

Sewol’s sinking left a long-lasting mark on collective memories of Koreans. From the moment the first 119 call for help was routed up to the ferry’s submergence into the water, the tragedy was televised as it unfolded on April 16, 2014.

The ferry, sailing through the Jindo archipelago in the farthest southwestern corner of Korea, sank at 2:37 p.m. nearly seven hours after capsizing that morning. Among 476 people aboard, 339 were Danwon High School students and faculty members on a field trip to Jeju Island.

At the end of rescue efforts that followed, just 176 survived. The vast majority of casualties were high school teenagers.

On Saturday afternoon a remembrance ceremony was held at Ansan’s beloved recreation park about 10 minutes away by walk from Danwon High. Long a place for school trips and family outings, this park holds cherished childhood memories for Danwon students, who would have been 25 to 26 years old today.

Describing his late son, Jeong Seong-uk said, Dong-soo was a “kid with big dreams and a loving brother to his younger sister.”

“He wanted to be a robot engineer, and he was a very good student. He already had plans for his future when he was just in middle school,” Jeong told The Korea Herald outside the tent for parents attending Saturday’s ceremony.

Wearing a canary yellow jacket, which became the color of remembrance for Sewol victims, he said that every day since the sinking has felt the same.

“I guess what I want to let the kids know is that moms and dads are doing their best, and they can rest in peace,” he said.

Hundreds of people came by the park that afternoon and paid tribute. All of the seats, which were limited to around 300 due to coronavirus concerns, were taken.

Jung Yun-sun, 38, said her heart still breaks for parents. She traveled from Hwaseong about 19 kilometers away with her two elementary school boys to watch the ceremony.

“I want them to know they are not alone, and they will always be remembered in our hearts,” she said.

“For the people of Ansan, that day lives on,” said Park Hyeong-du, 58, who lives in the neighborhood. “I still remember the moment I saw it on the news. I remember thinking, ‘These kids are from our town,’” he said.

At the Mokpo harbor where the recovered ferry lays, visits continued late into the evening.

The chain-link fences surrounding the vicinity were covered with yellow ribbons and pictures of the missing. To this day, two Danwon High juniors, a teacher who returned to the ferry to look for his students, a toddler and his father still remain unaccounted for.

“Danwon students were just about my age,” said Choi Yun-seok, 26, a native of the port city.

“I only learned after coming here today that there are people who are still missing. And I’m going to hang a ribbon in the hope that they may be found and returned to their families,” he said.

“I hadn’t realized that it’s been eight years. I’m just one person, but I want to show that someone remembers.”

Seo Young-mi, 33, who lives in the nearby county of Yeong-am, said she believes Korea hasn’t progressed much since Sewol.

“Similar accidents still make the news every now and then, and they’re quickly forgotten. Then they’re repeated again and again,” she said.

“I hear that the district office is going to remove the facilities. I hope that it stays, or at least relocated, as a reminder of what happened and as an honor to victims.”

A 39-year-old Mokpo couple who came with three small children said they visited the harbor every year.

“I want my kids to learn that something like this had happened in our country,” said Park Eun-kyung, the mother.

The father, Oh Sang-hoon, said, “It’s sad to see that this site is in such neglect. No one is looking after this place.” From the day the ferry got to the harbor “what they did with the place had an air of non-permanence, like it’s meant to be here only temporarily,” he said.

It was dark and desolate with sparsely placed streetlamps and nothing around for miles. Signs and fences were going rust. A shipping container-turned-information booth was shabbily furnished.

This year’s Sewol disaster anniversary is the last one to fall during Moon Jae-in’s term as president. Moon, who blamed the preceding Park Geun-hye administration’s negligence and incompetence for the ferry’s sinking, rose to presidency on the promise that he would uncover the truths surrounding the disaster.

A Sewol survivor and Danwon graduate, Jang Ae-jin, told the audience comprising lawmakers, Cabinet officers and Prime Minister Kim Boo-kyum at the Ansan park on Saturday that the government “looked on and did nothing as families fought for answers.”

“I thought that when I become an adult we would have a clearer picture of what happened. But so many pieces are still missing,” said Jang, who became an emergency medical technician in 2018.