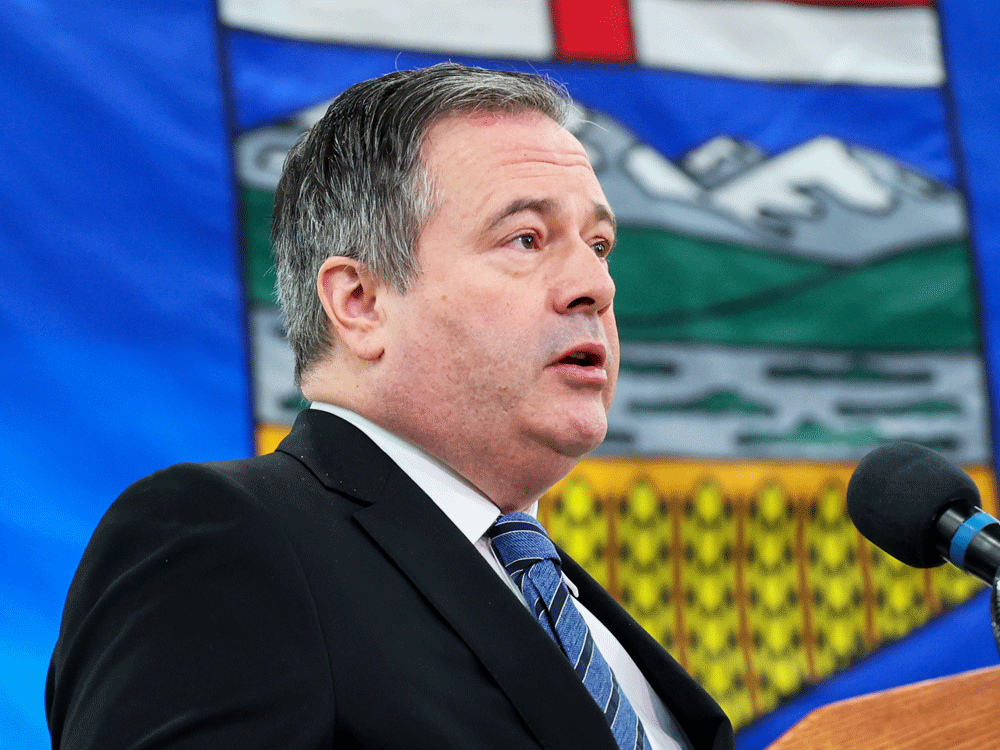 EDMONTON — Alberta Premier Jason Kenney is in a fight for his political life.

Ballots are now being mailed to the membership of his United Conservative Party, and the party faithful will have the chance to determine if Kenney stays on as leader of the party that he forged in 2017 out of the remnants of the Progressive Conservative and Wildrose party.

The union held — holds still, but the COVID-19 pandemic has exposed deep fractures within Alberta’s right wing. Openly dissident members of the UCP caucus has inspired internal talk of a leadership putsch. And, at a time when Alberta is recovering — beyond all expectations — from a multi-year economic slump, with one year until the next election, Kenney is facing a risk that his leadership will be swiped out from under him.

Last weekend, at a speech that kicked off the leadership review, Kenney harkened back to the leadership crises that have plagued conservatives in this province since the days of Ralph Klein, drawing a clear line between that infighting and the astonishing 2015 victory of Rachel Notley’s New Democrats that broke four decades of uninterrupted conservative rule.

Yet that drama aside, Kenney has been bullishly promoting Alberta’s energy industry. Oil prices are at the highest they’ve been since 2014. In March, the government released a budget that’s forecasting a surplus. And this week, Sen. Joe Manchin, a West Virginia Democrat and chair of the Senate Committee on Energy and Natural Resources, was in Alberta to discuss energy politics, and boost Alberta and the idea of North American energy security.

Jason Kenney spoke Thursday to the National Post. This interview has been edited and condensed for clarity.

Joe Manchin suggested a delegation from Alberta should go to Washington. Is there an update on a timeline?

If you go to Washington, what would be some metrics for success? Or concrete things you’d like to see achieved?

For us to have an audience in front of the leaders of American energy policy and the Congress will itself be a big win.

I think where there’s a will there’s a way. There’s likely going to be a significant shift in the U.S. Congress at the midterms. We may have something close to a super-majority in both houses that want that pipeline built — a pipeline built — that want to displace OPEC imports by increasing Canadian imports.

And so, you know, we’re going to continue the discussion about how to make that happen.

Is Alberta even able to fill demand, if the focus shifts more heavily to Canadian oil?

If all of our producers together maximize their current capacity and begin some greenfield development for new production, yes.

We always talk about the oilsands but the conventional side, they can add production pretty quickly with the right … price signals and policy environment. So can we add a million barrels a day in the next year? No, but we could add a few hundred thousand if the right certainty was there.

A leadership review is on — are you, personally, the dividing figure in the party?

It certainly is a highly motivated, small minority that have decided to get involved in this leadership review, to drive an agenda that is far outside the mainstream. And to ignore that is to ignore what is obviously in front of us, OK?

This is the reality that we’re dealing with, and I am doing my level best to maintain this as a big tent, but still mainstream, centre-right party. Is that easy? No. Will there be angry and marginal voices from time to time? Yes.

But I’m committed to staying the course on this and if we go into a leadership election, there is no doubt that the passionate intensity will come from people who don’t believe COVID ever happened, believe that the vaccines are lethal and want to settle scores over all of that.

I think that would be catastrophic for the party. I think the majority of Albertans wouldn’t have a clue understanding that debate. They would think this is reckless and is ignoring the real bread and butter concerns of most Alberta families, which is around the economy, the cost of living inflation, housing, etc.

Can the party’s division be healed?

Yes, I believe we can overcome the tensions within our movement that surfaced during COVID.

And I have a bit of experience with this because I spent three years of my life rebuilding the United Conservative Party in Alberta. There were deep divisions, resentments and distrust that had built up over a decade.

When I started that work, there were a lot of people in both legacy parties who said “Hell no, it will never happen. I’m never going to be in a room with those guys.” But we did the hard work, methodically and democratically, to build the new, united party.

So I think the vast majority of Alberta conservatives know that … it is unity or an NDP government period, full stop.

But the main issue we faced internally over the past two years has been division over COVID. My argument is, let it recede in the rearview mirror, the worst of it is behind us. Let’s not permanently divide our movement and party over a once-in-a-century crisis, let’s move forward. I believe that as I get around the province, that’s where the vast majority of our members are at.

You have said 50+1 was a majority for you to stay as leader. Are you still standing by that number?

Well, I’d like to get as much support as possible, but I did say that 50 per cent plus one is a majority in a democracy. That’s the number required in our constitution for the leader to be confirmed at a review vote.

I know all of you guys in the media want me to invent some arbitrary figure, I’m not going to do that. I’m optimistic that I will receive a strong endorsement from the membership. I don’t know what the number will be.

And I will respect the outcome. If I receive that endorsement, I expect all members of our caucus to respect it. If I don’t get endorsed by the members, I will, in all humility, step aside and thank them for the privilege of having had the best job in Canada.

But I believe that a significant majority of mainstream Alberta conservatives are going to vote for unity, stability and continuity.

The Conservatives are on the hunt for a new leader. Which candidate do you back?

My focus right now is on, first of all, ensuring the unity of our provincial party and getting the job done for Albertans.

Once we get past our leadership review, I might turn my attention to that. I will say that I hope that the next Conservative leader is someone committed to a strong future for the Canadian oil and gas industry.

So I’d be happy to talk to any of the candidates about those issues that are key to the future of Alberta’s economy.

But, you know, I don’t think we’ve seen the full slate, field of candidates yet. And as I say, I’m focused on the immediate challenges facing Alberta.