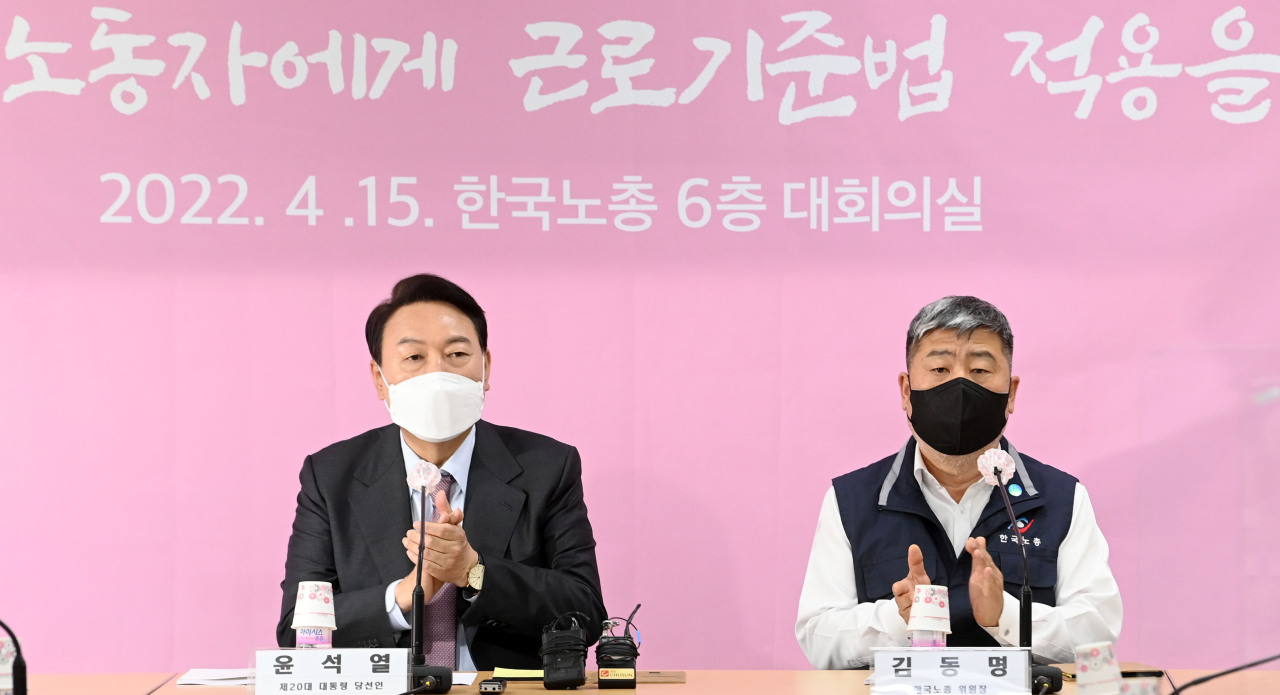 President-elect Yoon Suk-yeol said Friday that he would take workers’ voices into account in policymaking decisions as he takes office in May, in his first meeting since the election with representatives at the Federation of Korean Trade Unions, one of the two major umbrella unions here.

“I will follow up on my promise to respect the value of labor and make workers proud. I won’t say much today but will listen to what you all have to say,” Yoon said.

Yoon, who vowed to reverse some of the pro-labor policies set by the current Moon Jae-in government during the election, is seen as seeking to soft-pedal on his campaign promise as he works to balance the interests of both business leaders and labor unions.

Yoon has long taken a pro-business stance, but such stance is being watered down.

Choo Kyung-hoo, the Finance Minister nominee, has picked private-sector companies as the main driver of a breakthrough in Asia’s fourth-largest economy, which is grappling with economic woes, chiefly surging inflation prompted by the pandemic.

But on Thursday, Yoon named Lee Jung-sik, a longtime labor activist who had taken on key positions at the labor federation, to lead the Labor Ministry. Lee is expected to be tasked with revising rules on contentious labor practices involving limits on working hours and the minimum wage.

The appointment surprised many, as Yoon had reached out to business leaders over labor groups shortly after the election to hear their complaints. In late March, Korea’s largest group of trading companies told Yoon that the laws on working hours and the minimum wage, for instance, hurt business confidence.

It remains unclear how far down the road Yoon is ready to compromise on reversing Moon’s pro-labor policies, with Yoon’s nominee as finance minister pointing out that the next government would support an economy where private-sector companies take center stage in growth and job creation.

In that case, workers are likely to see their demands given less priority than those of the corporate sector.