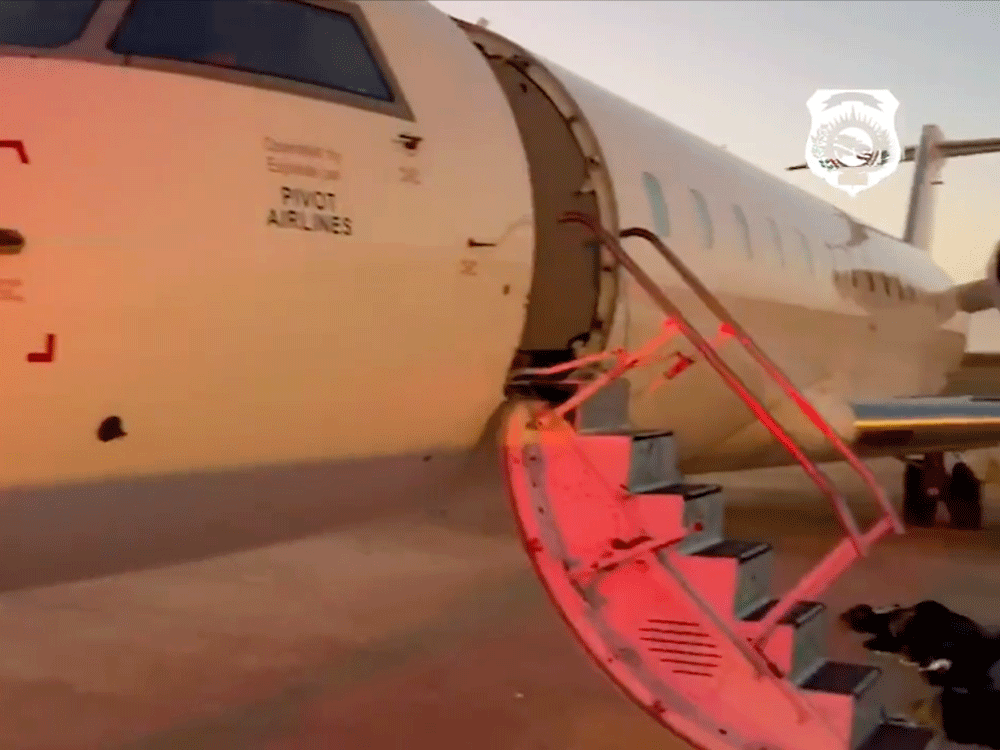 A judge in the Dominican Republic has ordered the release of a Canadian airline crew who are said to have reported a large stash of cocaine hidden inside their plane — then were jailed in precarious conditions next to alleged drug traffickers.

The judge said they could be freed at an undetermined time on payment of one-million pesos — about $23,000 — bail each, according to a local news report and a source familiar with the situation.

The six passengers on the plane, a charter flight due to return to Toronto last week, were to be freed from prison under similar conditions, the judge ruled. Four are Canadian, one an Indian national and one Dominican.

Pivot Airlines, which owns the Bombardier-built CRJ-100 jet, had earlier expressed grave concerns for the safety of their employees, calling it unacceptable that they would be imprisoned in the first place.

According to a report in the country’s El Nacional newspaper, though, prosecutors are reviewing the decision and whether to appeal it.

The court ruling is the latest twist in an unusual tale that Pivot says turned the heroes of the day into criminal suspects.

The plane had until two years ago been part of a predecessor company that operated Air Canada Express flights under contract. It flew to Punta Cana on March 31, chartered by an Alberta company that was entertaining potential investors, said the source, who asked not to be named because of the sensitive situation.

According to Pivot, a maintenance technician who was travelling with the two pilots and two flight attendants discovered a black bag inside an “avionics bay,” a crawl space beneath the cockpit that contains computer hardware and wiring.

The crew reported the find to both local authorities and the RCMP, the airline says.

The Dominican National Directorate for Drug Control (DNCD) searched the space and found seven more bags, containing a total of 210 kilograms of cocaine, having a Canadian street value of roughly $25 million.

Pivot says the discovery not only stymied an attempt to smuggle drugs into Canada, but prevented a potential air disaster. The extra weight — unknown to the pilots — could have caused serious problems, while the contraband stuffed into the bay risked impeding airflow needed to keep the electronics from overheating. That could have triggered a fire, the company says.

The DNCD says its officers found the drugs in response to “intelligence.” The crew and passengers were then put in separate jails for drug traffickers, the men in communal cells along with accused narcotics offenders who knew they had just reported a drug crime, says Pivot.

“We are deeply concerned for the safety, security and ethical and humane treatment of our crew,” the company said in a statement earlier this week.

According to local media reports, which the National Post could not independently confirm, they were held under a “coercive measures” document as part of the investigation.

The Dominican Republic and other Caribbean countries are popular waypoints for traffickers moving cocaine and other drugs from South America to North America or Europe, says Jason Eligh, a senior expert with the Global Initiative Against Transnational Organized Crime. Routing the contraband through a place that doesn’t produce cocaine helps lessen scrutiny of a plane or other vessel when it reaches its ultimate destination, he said.

Indeed, Diario Libre newspaper reported this week that Dominican authorities had seized more than four tons of cocaine just in the first two weeks of April, finding it at ports, airports and other locations.

The stash of cocaine suggests that someone at the Canadian end was prepared to retrieve it from the avionics bay. But the RCMP declined to provide any comment on the case, saying it does not generally confirm or deny the existence of an investigation unless charges are laid.