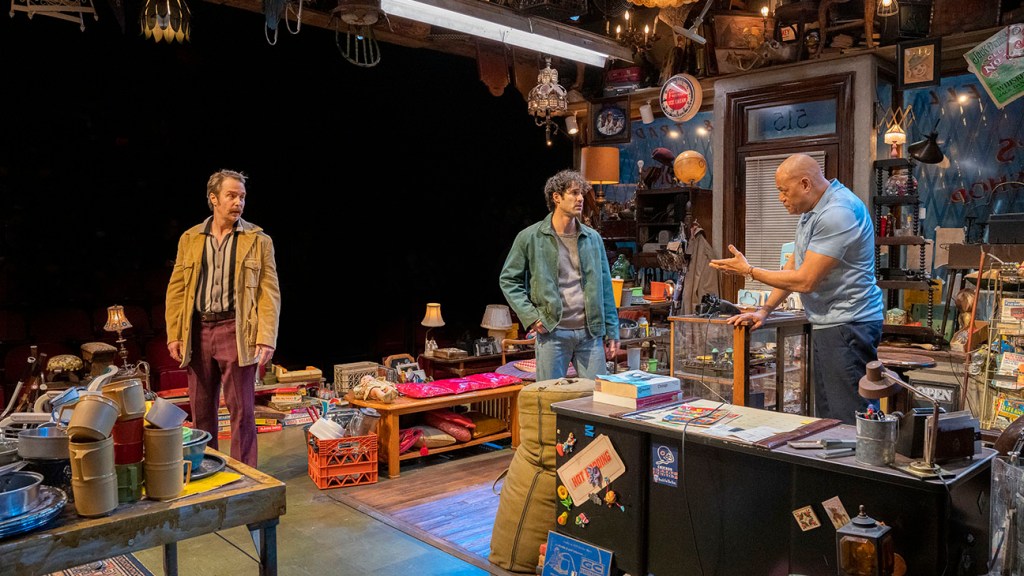 It’s a peculiar experience to consider the work of a celebrated playwright who has gradually fallen out of favor. Every step of the process — from researching to watching to facing the page — trembles under the weight of Big Questions: Art vs. Artist? Why now? Why this play? Why him? In your search for honesty, you encounter elisions, a funny kind of vagueness, a general skittishness around the whole enterprise — the production and its attendant buzz. You come across heartbroken admirers, confused spectators, ardent supporters, detractors and reasonable positions here and there. You dig some more. You hungrily gather details and assemble them alongside your own observations. You stare at the notes, the web of contradictions, the unsatisfactory nature of it all.

David Mamet’s American Buffalo is now on Broadway, buttressed by a starry cast. Laurence Fishburne, Sam Rockwell and Darren Criss are sharp and lithe in this revival of the caustic 1975 play about three hustlers planning a heist. They stalk across Scott Pask’s ornate set as they hurl Mamet’s signature terse prose at one another. Their speech moves rhythmically — a sonorous medley. They motion their bodies with precision and intention. This critic stares, entranced by their dance.

But a nagging feeling crops up more than once. Looming over director Neil Pepe’s skilled production is the shadow of Mamet, the person. In the world just outside Circle in the Square, where the show will run through early July, the Pulitzer Prize-winning playwright is embroiled in controversy. Last Sunday, he appeared on Fox News and, in defense of Florida’s minacious and contested “Parental Rights Education” bill, the playwright told Mark Levin that teachers were “inclined toward” pedophilia and students were being groomed. Days before spewing that incoherent and paranoid right-wing talking point, he and Bill Maher engaged in a flaccid conversation about Mamet’s new book on, what he believes is, the end of free speech.

This is not the first time Mamet, heralded for his ability to capture a specific kind of working-class anxiety, has made headlines. In 2008, he published an essay in The Village Voice renouncing his allegiance to liberalism and embracing conservatism. He praised the founding fathers, marveled at the Constitution and questioned his previous position against the military. He characterized his slide toward conservatism as an awakening: Finally, Mamet, unlike these liberals, was living in the real world. And yet this world curiously did not consider the roles white supremacy, the patriarchy, homophobia, transphobia and xenophobia have played in shaping and maintaining this “equal opportunity” America.

Years later, Mamet would be back with more opinions — against gun control laws and NFL protests of the national anthem. His rationale for these views always boiled down to the reality of humanity, whom he no longer believed to be inherently good. “I began to question what I actually thought and found that I do not think that people are basically good at heart; indeed, that view of human nature has both prompted and informed my writing for the last 40 years,“ he wrote in The Voice. “I think that people, in circumstances of stress, can behave like swine, and that this, indeed, is not only a fit subject, but the only subject of drama.”

That is, indeed, the subject of American Buffalo. Donny (Fishburne), Teach (Rockwell) and Bobby (Criss) are an anxious trio. The play opens with Donny, the owner of a junk shop, admonishing his gopher Bobby for his inattentiveness. He had one task: To watch the home of a man to whom Donny thinks he undersold a valuable buffalo coin. Donny wants to steal it back and sell it at a higher rate, and so he sent Bobby, diminutive and ready to please, to stake the man’s home and see when he’d be away.

Donny, whom Fishburne plays as wise, exacting but ultimately soft-hearted, uses the moment to lecture young Bob on the importance of common sense and keeping your word in their line of business. Loyalty and action are key. But Donny goes on to say, so are breakfast and vitamins. It’s funny turns like these that keep the play light and aerodynamic.

The humor also clarifies the play’s sinister undercurrents. Teach, Donny’s capricious and foul-mouthed friend, barges into the shop mid-lecture. Dede Ayite’s costume design dazzles here as a well-dressed Rockwell recounts a feud with two women he hates. Rockwell expertly wields Teach’s crass behavior, finding ways to deepen a character that could too easily feel one note. When Teach gets a whiff of Donny and Bob’s plan, he wants in. He uses a moment when Bob steps out to correct a breakfast order to convince Donny to ditch the kid for a more experienced hustler like him. It takes some convincing, but Donny eventually agrees.

American Buffalo takes place over the course of a single day. The first act is in the morning, around breakfast time, and the second is a little before midnight. That tight time frame coupled with the cluttered set, littered with collectable items and old wares, add to the play’s claustrophobic nature.

The play is about a heist, but it is also about the conversations — suspicious, avoidant, sad — leading up to the heist. It’s through these moments — asides about the resale value of junk, vitriolic rants about people who cheat at cards, feuds and pat remarks about being treated right — that the central characters’ desperation comes through. To escape the small world of the shop, they need to make a lot of money and fast.

Much of the play, especially the language, is dated and therefore cringe-inducing. But the system in which the character’s live, where loyalty and friendship aren’t honored, doesn’t feel as discordant with our times. They act out, betray each other, and erode whatever trust they started out with because the goal is to get rich or at least comfortable.

Mamet wrote American Buffalo before his 2008 renunciation of liberalism, during a time when he still ostensibly believed in criticizing capitalism. I wonder what the playwright, who famously doesn’t watch his revivals, would say today about the system, the circumstances, as he wrote in The Voice, that weigh on Donny, Teach and Bobby’s relationships to one another, forcing them to act like swine.