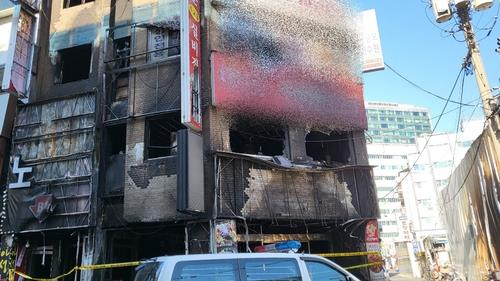 A man was arrested on charges of setting fire to a four-story commercial building in Seoul early Friday, which left one dead and another injured, police said.

The fire broke out at 3:24 a.m. at the building in Seoul’s western district of Yeongdeungpo, gutting its first and second floors and charring the walls of the third and fourth floors before being extinguished around 5 a.m.

A man in his 60s died on the third floor, and a woman in her 70s was taken to hospital for smoke inhalation.

After checking CCTV surveillance footage, police detained the suspect on a nearby road.

He was found to have set another fire in the neighborhood hours earlier, which was promptly put out with no casualties.

The suspect in his 30s confessed to the crimes, and investigators said they plan to seek an arrest warrant after determining his motive. (Yonhap)