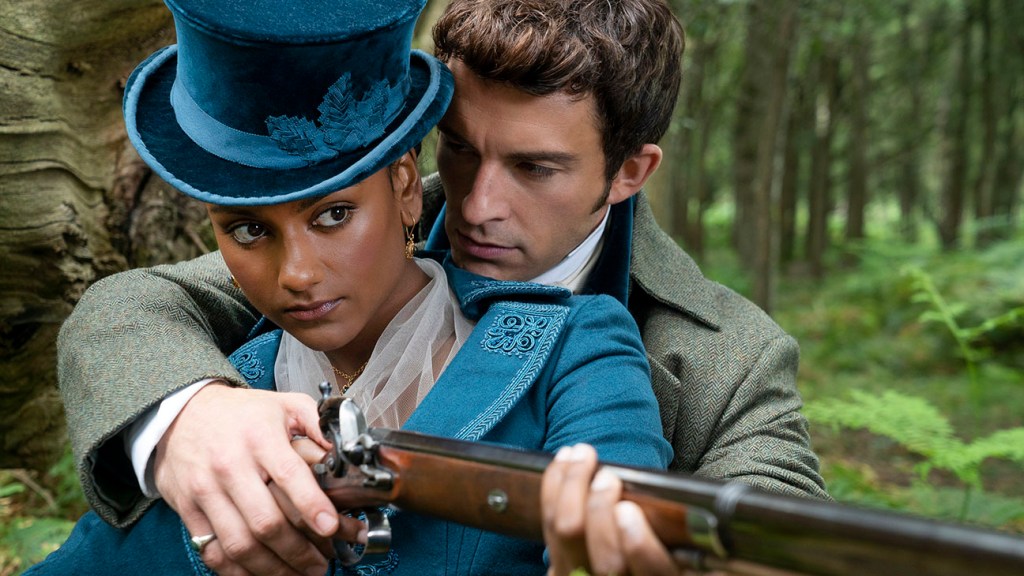 Bridgerton’s second season is more of a tantalizing will-they-won’t-they romance than a steamy bodice ripper — which means viewers have more time to admire the lavish Regency-era fashion while it’s still on the castmembers’ bodies. Sophie Canale, who assisted costume designers Ellen Mirojnick and John Glaser on season one of the hit Netflix series, took the lead job this go around. (Thankfully, she had a whole season’s worth of outfits to build from.) Canale spoke to The Hollywood Reporter about how her team combined European and Indian styles to craft the costumes in the eight-episode series and how each choice of fabric, color and cut served to deepen character. Here are five key excerpts from the conversation.

“We made the majority of the costumes. Yet we were fortunate to have the stock of season one, including all of the women’s and crowd costumes [about 7,500 bespoke outfits], so we could build on that and style it differently in season two. We made, on average, 160 costumes every six weeks. There were around 700 for principals alone, but we made about 100 to 150 costumes for the crowd for a total of 800 to 850 for the season. I had a team of 120 people in house. But because there were so many characters, we had a lot of outsourced work, as well.

Every daywear costume had a reticule handbag, a set of gloves embroidered to match the fabric, a hat or hair decoration and coordinating shoes. A team of three jewelers made sets of jewelry for the majority of costumes, for every single dress at every single ball. And all the men have fob watches this season.”

“We used different colors for different families: a lot of bright, citrus colors for the Featheringtons; the Sharma sisters are quite distinctive. Kate (Simone Ashley) is a strong character, so I portrayed her in jewel tones of India, teals and purples, reflecting where she’s from. I put Edwina (Charithra Chandran) in pinks, mauves and lilacs to give her a softer look. Anthony Bridgerton (Jonathan Bailey) is at first a lot darker than he was in season one, because he’s a lot more serious. Yet Kate and Anthony share a color palette, because they are on this journey together and they become lighter as we go through to the last scene.”

“I wanted to make Edwina more delicate, in terms of her character, by always having a floral element to her costumes, with laces and shawls. Kate and Edwina wear Spencer jackets. There’s a stronger cut to Kate’s, and we see her with shorter sleeves and Indian sleeve shapes. Throughout the season, the cut of the sleeves was very important to me, because the Empire line is the silhouette of the Regency period — you can’t really play around with that — so I made sure there were different sleeve cuts throughout the episodes and that everyone had a different sleeve shape in each scene. The men’s costumes all have a Regency cut, but I narrowed the trousers slightly, giving them a cleaner, sharper look.”

“Kate’s fabrics change as we go through the season. We start with her wearing heavier-weight silks, taffetas and satins to portray the rigid element of her character and how she’s got her guard up. As her defenses come down, we move into lighter-weight satins and silks. Eloise Bridgerton (Claudia Jessie) has a masculine look, reflected in the fabric choices — heavyweight silks. And then I brought lots of checks and Regency stripes, very popular for a gentleman’s waistcoat, into her world. All of the gentlemen’s waistcoat fabrics have a very distinctive look.

Fabrics are a very important element of design—that’s where I get my inspiration. There were so many fabrics. It was non-stop sourcing. We had three buyers who were constantly sourcing fabrics from all over the world.”

“It’s all about the details with my designs. With the queen’s costumes, there’s so much detail in the embellishment—lots of pleatwork and embroidery. We were using Indian embroidery for Kate’s corsets, as well. I worked closely with hair and makeup lead Ericka Okvist, so every time she was designing a wig, we collaborated to make sure the decorations in the wig matched the jewelry. This season, I brought in lots of hair decorations — flowers, small fascinators, hair pins.”