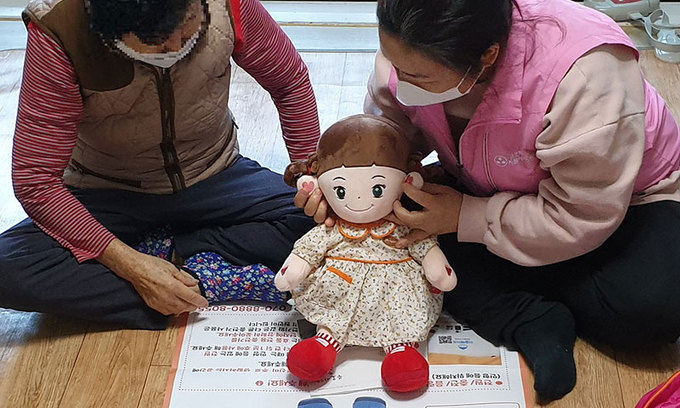 The COVID-19 pandemic has been particularly cruel to older people. Digitally estranged, those living alone were virtually cut off from the world as community centers closed down.

To fill this void in senior care, authorities and institutions have deployed companion robots.

These care machines with artificial intelligence have been billed as an example of the pandemic accelerating the deployment of cutting-edge technology. They provide emergency monitoring for older adults living alone, and help ease their loneliness, developers say.

“Hyodol” is one of the most well-known AI companion robots for seniors here, developed by a startup of the same name.

Since its launch in 2018, more than 5,400 units of the AI-powered stuffed toys have been supplied to 114 local governments including Jongno-gu in Seoul and 250 institutions nationwide, according to the Seoul-based company.

With the convergence of sensors, Internet of Things and machine learning technologies, the companion robot notifies the guardian of a user when no movement is detected for a certain period of time. It sends emergency text messages and phone calls when a user presses and holds its hand for more than three seconds, a gesture that can be custom set for such situations.

Standing 35 centimeters tall, the doll is also loaded with 9 types of entertainment programs, including sets of quizzes and stories. It can play more than 3,000 songs, with genres ranging from classical to trot — an old Korean pop genre loved by seniors.

Among Hyodol’s features, senior users like the talking alarm function the most, as it reminds them to take medicine, said Lee Yae-seul, a Hyodol official.

The doll is designed to talk when touched by the user and in accordance with customizable time settings such as meal times.

“We want an emotional exchange (between users and Hyodol) so that users feel like they are being cared for and that there is someone by their side,” the Hyodol official said.

Dasomi looks like a barcode reader with a screen, and has functions similar to Hyodol. It also provides dementia prevention gymnastics videos through a display screen. Family members or government officials are able to make video calls to the user by utilizing a mobile app which also enables them to check the safety of the user remotely.

Mr. Mind’s companion robot stores and analyzes conversations with elderly users to monitor their emotions and track their mental and physical health.

How far have the robots come?

A study published in the Journal of the Korean Gerontological Society last year found that users were “moved and strengthened” by the words of encouragement from Hyodol.

The authors, including Lee Eun-kyoung, a professor at the University of North Carolina School of Social Work, concluded that the robot helped research participants — 12 people whose average age is 82 and have used the robot for 18 months on average – improve their daily activity and depression levels.

It also found that the users felt discomfort when Hyodol failed to understand their words, and when their hopes for a two-way communication and building bonds were not met.

Another study conducted by Song Moon-sun, a doctoral student at Ewha Womans University, found that users started to experience a personification process of Hyodol around three months of use.

“Women participants were more likely to perceive Hyodol as a ‘doll,’ while men experienced anthropomorphic disorders as they recognized it as a ‘machine,’ showing dissatisfaction with the low intellectual level of the robot and simplicity of their conversations with it,” Song said.

In another study published by the Society of Digital Policy & Management in February, Suwon Women’s University’s Nursing Professor Kim Yeun-mi found a similar effectiveness in the use of robots for the elderly in one-person households.

“If such non-face-to-face care technology is introduced to the elderly care field in line with ‘living with COVID-19,’ it can be expected to contribute to cognitive function training and reduction of depression among the elderly,” Kim noted in the report. The research was conducted on 38 people, and included an experimental and control group.

He said even tech behemoths’ virtual assistant programs, including Apple’s Siri, Google’s Assistant and Samsung’s Bixby, have not reached the point where they can communicate with users like human beings.

Though caregiving robots should be able to communicate, Lee said that he didn’t think they can provide any emotional support to seniors.

“Giving physical care (through a robot) may be easy, but emotional care is much more difficult,” he said.

Ensuring elderly users’ safety should be the most important factor when designing AI companion robots for the age group, rather than their interaction capabilities, said Oh Yoon-seon, an assistant professor at the Department of Electronic Engineering at Hanyang University in Seoul.

“Especially for elderly users with mild dementia, it is important that the robot is capable of detecting their activities in the event of a collapse or the user leaving home without a companion,” she said.

Deep learning technology may also be needed to facilitate human-computer communication, as some seniors are unfamiliar with using digital gadgets with complex interfaces, she added.