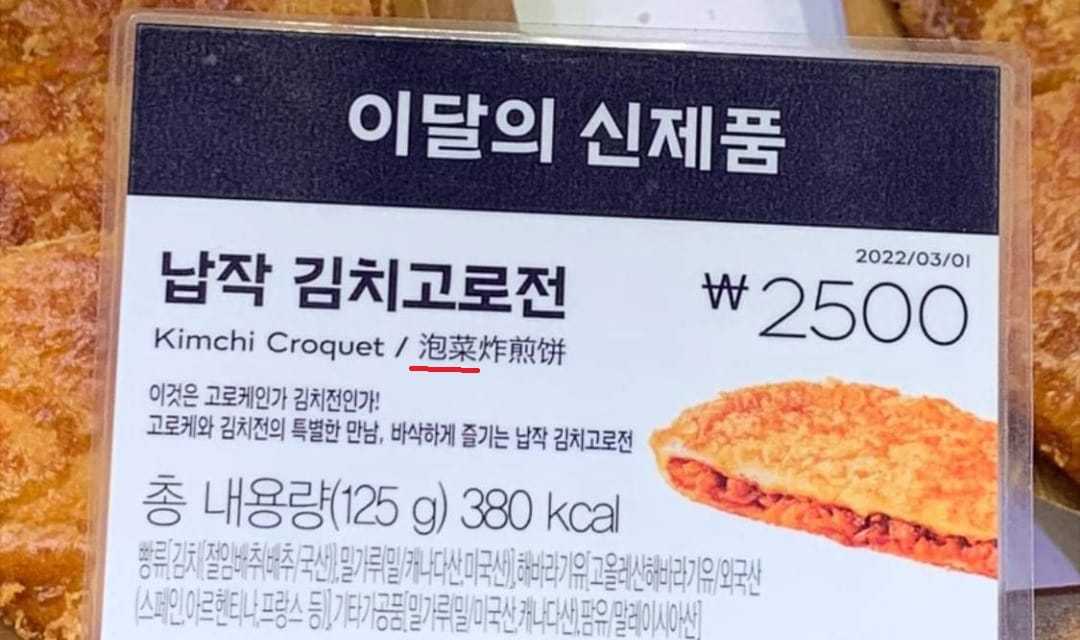 Korean companies exporting kimchi or food containing the Korean spicy cabbage are on high alert after a decades-long cultural feud over its origin has resurfaced online.

Seo Kyung-duk, a professor at Sungshin Women’s University in Seoul and a cultural heritage activist, blasted bakery chain Paris Baguette bakery on Monday for using Chinese word “pao cai,” in the Chinese translation of the name of one of its breads.

Starting in March, the bakery has written the Chinese translation of its kimchi croquet as pao cai croquet, sparking public anger in Korea. Some customers have accused the company of distorting the origin of kimchi.

“The incident has raised eyebrows. I don’t mean to slander a certain company, but I feel sorry for the use of incorrect translation remaining here and there,” wrote Seo on Facebook.

“As you all know, China is continuing its ‘kimchi project,’” Seo said, referring to Chinese attempts to distort the origin and history of kimchi. The name is a reference to the Northeast Project promoted by the Chinese government to claim that the Korean Goguryeo dynasty is part of Chinese history.

“To stop giving a cause to China (to distort the origins of kimchi,) we should correct the use of misleading Chinese translation of kimchi here.”

A Paris Baguette official told The Korea Herald that the company suspended the sales of the product in question last week and is planning to use the term sinchi from now on.

Sinchi, meaning spicy and unique in Chinese characters, is an official Chinese translation of kimchi proposed by the Agro-Fisheries Trade Corporation in 2013.

“Following the new guidelines, the three ministries — Ministry of Foreign Affaris, Ministry of Culture, Sports and Tourism, and Ministry of Agriculture, Food and Rural Affairs — have already adopted the term sinchi, and it is recommended to be used by local companies as well,” said an official from the state-run World Institute of Kimchi.

But market insiders say the name sinchi is unpopular because it’s only a recommendation for South Korean companies and Chinese media.

“Many companies that export food products containing kimchi to China write pao cai instead of sinchi, because they’re afraid of backlash and boycotts there,” said an industry source who wished to stay anonymous.

The fermented vegetable dish has served as a long-running cultural spat between South Korea and neighbors China and Japan.

A major Korea-China diplomatic clash over kimchi occurred last year after state-owned Chinese newspaper Global Times published an article with the headline “Korea, so-called origin of kimchi, is humiliated” after pao cai received certification from the International Organization for Standardization.

South Korean social media users refuted that kimchi originated from Korea, citing its history and added that Korean kimchi was officially designated as the global standard by Codex under the Food and Agriculture Organization of the UN in 2001 — a commission they said has more public credibility than ISO, a private organization.

Another kimchi dispute with pickle-loving neighbor, Japan, has an even longer history.

After Korean kimchi was showcased to athletes participating in the 1988 Seoul Olympics, Japan started promoting its “kimuchi” as the original kimchi.

The cultural feud escalated in 1996 when Japan proposed designating kimuchi as an official part of the food offerings at the Atlanta Olympics.