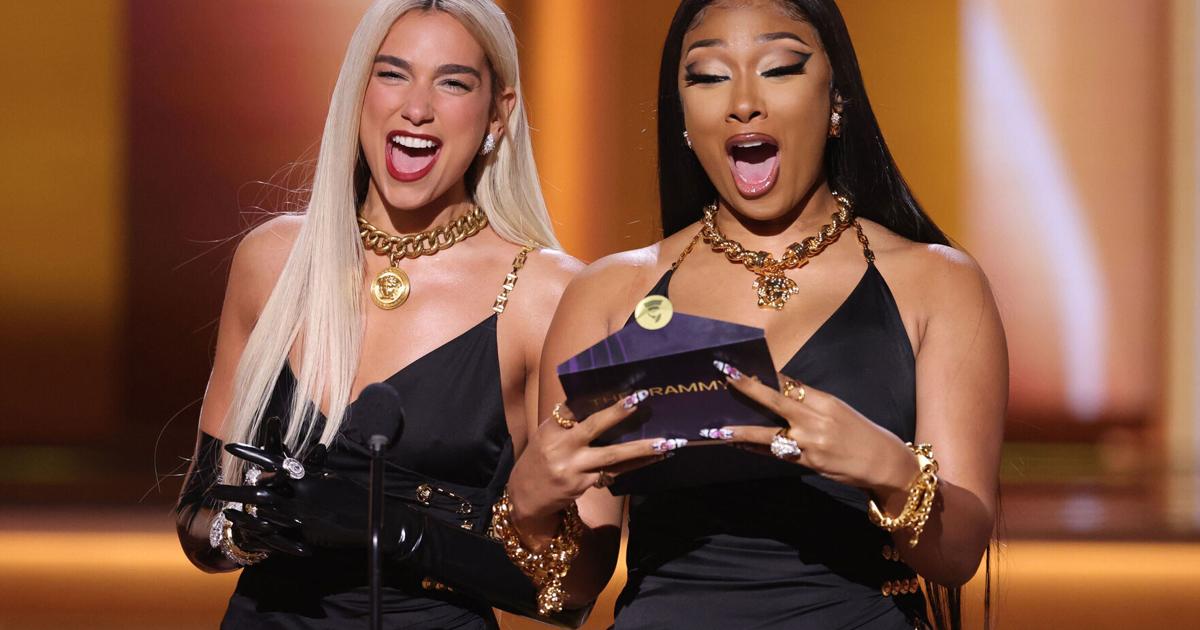 Artists Megan Thee Stallion and Dua Lipa took to the stage on Sunday night to present the award for Best New Artist at the 64th annual Grammys, where they recreated a moment from pop culture history with a staged wardrobe mishap.

Both singers arrived at the microphone wearing the same black Versace wrap dress and chunky gold pendant turning to one another in false outrage. “Not you stealing my look,” said Megan Thee Stallion. “I was told I had the exclusive,” replied Dua Lipa, “I’m going to have to have a talk with Donatella.”

Moments later, the 66-year-old Italian fashion designer waltzed on stage wearing a gold sequin belted-dress, muttering in Italian. She promptly removed the detachable skirt from both artists. “You know what? Let’s do this,” she said as she revealed Dua Lipa’s barely-there mini hem and left Megan Thee Stallion with a dramatic thigh-high midi split. “Now these are my girls,” said Versace before leaving the stage. “Thank you Donatella! Now we both look like winners,” added Megan.

While it’s a fashion faux pas every celebrity dreads, the moment between the two performers on Sunday night was a playful reference to another awards show some 24 years ago. At the 1998 Video Music Awards, musical legends Mariah Carey and Whitney Houston used fashion to make light of their alleged professional rivalry. After years of the press directly comparing their careers, Houston made the now-iconic retort in a 1990 interview when she was asked what she thought of Carey. “What do I think of her?” Houston replied, “I don’t think of her.”

Eight years later, as they presented the award for Best Male Video together, Carey and Houston played up to their reputation as feuding divas by wearing the same brown, plunge neck Vera Wang gown. “Nice dress,” Carey said to Houston on stage. “That’s a one-of-a-kind, yeah? Looks pretty familiar.” The gag went down in pop culture history, and now lives on nearly three decades later.