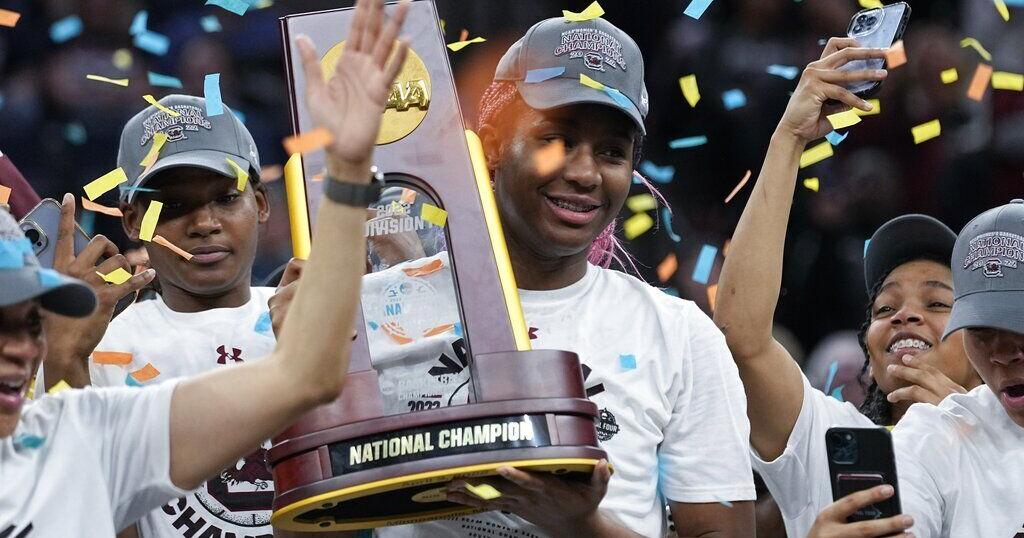 Say this for the South Carolina women’s basketball team: Regardless of the outcome, they went to the Final Four fully committed to enjoying and savoring the moment. Even though it seems like playing on the college game’s biggest stage is an annual event now, nothing was taken for granted and nobody needed to explain that the memories created over the season’s last few days would last forever.

The real “fun” for them, however, would only come from cutting down the championship nets on Sunday night.

So all those pent up emotions erupted after they completed a wire-to-wire run as the top-ranked women’s basketball team in the nation by knocking off UConn 64-49 Sunday night in the national title game.

Players screamed and shouted on the court as the final seconds ticked off the clock, then the party continued back at the team hotel.

About 300 people filled the lobby and when the Gamecocks came through the door, they cheered as each player walked past. They saved their loudest cries for the coach, chanting “Dawn, Dawn, Dawn” as Staley fist-bumped and took selfies with anyone who asked.

A member of the school’s pep band presented her with a drum head signed by this year’s musicians.

“Teams work hard all year,” Staley said, “but seasons don’t all end like this.”

Staley then went to a building adjacent to the hotel for a Gamecock Club celebration where football coach Shane Beamer was with his family.

There were more photos, more hugs and more thanks from Staley.

“We have a Dawn advantage,” someone yelled as Staley beamed.

Then she gave them a hint of what’s next: “How about this?” she said, “back to back.”

The Gamecocks granted The Associated Press behind-the-scenes access to their Final Four experience, a chance to observe them away from the public spotlight. It was clear that there was a singular focus to the journey that didn’t start last week but rather last year, almost immediately after a 66-65 loss in the national semifinals to eventual champion Stanford.

They were unified in their goal of reaching this year’s Final Four. Once here, everything was done as a team. Everything.

And they had plenty of support every step of their journey, all the way to the exhilarating end at the Target Center.

“Some fans had tickets and rooms long before we did,” Staley jokingly told the AP at the team hotel earlier this week.

The expectations were warranted. South Carolina began the season atop the AP Top 25 and never relinquished the mantle, motivated by the gut-wrenching loss in San Antonio a year ago when Boston’s short putback in the closing seconds didn’t drop.

They made getting back here look easy. South Carolina, the overall top seed in this year’s tourney, reached the Final Four last week in Greensboro, North Carolina, with an 80-50 win over Creighton.

After the traveling party of 44 players, coaches, administrative staff and support personnel arrived Tuesday in Minneapolis, the next day, work truly began.

After breakfast at the hotel, there was film study and practice.

But, in what became a theme for the Gamecocks’ time in Minnesota, that day’s agenda was a blend of preparation and celebration.

Following practice, the team went to the Lowe’s Hotel by the Final Four arena to watch Boston and Staley win Naismith Awards, the 6-foot-5 forward for defensive player of the year and national player of the year; Staley for coach.

Boston, not one to heap praise on herself, smiled and gently shook her head at the ruckus.

“It’s such a blessing to be here to see this,” said Cleone Boston, Aliyah’s mother.

On Thursday, Boston received more hardware when she was named the AP player of the year. And whenever the ceremonies ended, the group would return to the hotel to change, nap and get ready for whatever was coming next.

That often was study hall.

Academic sessions were a regular occurrence during March with the Southeastern Conference and NCAA Tournaments keeping them away from campus.

Maria Hickman, the school’s executive associate AD and administrator for women’s basketball, checks in the players, who spread out among the round banquet tables with laptops and cellphones for Facetiming tutors. Some, especially freshmen, spent more time in the 90-minute session than others.

“They understand what they have to do. They’re a good group,” Hickman said.

Ten players, all on this year’s roster, made the 2021 SEC winter academic honor roll including South Carolina’s starting five of Boston, forward Victaria Saxton and guards Brea Beal, Zia Cooke and Destanni Henderson. The list honors scholarship athletes with a GPA of 3.0 or better.

There was a little more levity at dinner following study hall, though not much.

Dinner was served buffet style with dishes of pasta, vegetables, fish and a taco tray. Fruit and slices of cheesecake were lined up for dessert. Water was the drink of choice.

Players kept the frivolity to a minimum during the meal, knowing a film session followed. Staley’s assistant Fred Chmiel prepared the presentation in a nearby hall.

For the film session, players sat at long tables set up in a U-shape with Chmiel in the middle in front a projector frozen with a Louisville offensive set. Chmiel grilled them with questions about what they should’ve already studied about the Cardinals.

“She can’t go right. Stay in all plays. Box her out,” said Beal, the Gamecocks top perimeter defender.

Chmiel next grilled Boston, her new award serving as her new nickname.

“Got to box her out,” the center responded.

In the midst of the session, two former South Carolina greats — A’ja Wilson and Allisha Gray — pop in. The pair of Olympic gold medalists are in town for a U.S. national team camp taking place here in conjunction with the Final Four.

The two guests — “We’ve seen this plenty of times before,” Wilson says of the film session — pull up chairs and the lights go out for about 10 minutes of Louisville offensive and defensive sets.

Around 8:30 p.m., the lights come on. Players, who know a long day is just about over, audibly sigh. They clearly were paying attention during the film study: South Carolina beat Louisville.

After the Louisville win, fans gathered in the team’s lobby to welcome the Gamecocks back. Everyone allowed themselves to enjoy the moment; Staley pumped her fist several times as supporters yelled, clapped and shouted.

Athletic director Ray Tanner joked how he talked with Staley at the Target Center and she asked how he was holding up against critics of the school’s recent search to replace Frank Martin, which ended last week with the hiring of Chattanooga’s Lamont Paris.

Tanner didn’t have to say how. “Win it all” was left unsaid, because it was clear.

So, Saturday morning, it was back to work.

Film study ramped up with a session on the Huskies, who took down defending champion Stanford 63-58 in the second semifinal.

Assistant Jolette Law, the former Illinois head coach — and Harlem Globetrotter — ran this one. She had run the film session before South Carolina’s 73-57 victory over then-second ranked UConn in the Bahamas back in November.

However, Staley was more talkative this time, especially regarding Huskies star Paige Bueckers.

“We’re going to change the way we play her throughout the game so she can’t get comfortable,” the coach said.

Staley emphasized the Gamecocks’ need to push the pace.

“We need to exhaust them,” she said. “It may exhaust us, but there’s a lot more of us than there are of them.”

Before exhausting her own team, Staley knew mental breaks were needed. There were times players headed to a fourth-floor lounge area equipped with a PlayStation and Nintendo Switch game systems. Boston and Beal settled into two massaging leather lounge chairs to play on their phones.

“I wish this were part of” the players’ gift suite, Boston quipped.

“You want to play? Who wants to play,” Grissett said.

Cooke and freshman Sania Feagin have a quick contest, seeing who can better spin small, commemorative basketballs on their finger. Then they start pitching them to each other faster and faster before Cooke’s toss gets away from Feagin.

They are loose, joyous moments for a group that chased the game’s top prize all year long.

“Every player on this team has sacrificed,” said Staley in her 14th season. “For some it’s playing lots of minutes, for others it’s not playing at all. But without them all playing their part, we wouldn’t be here, not at all.”

Such is the culture she has built.

In a few days, the yearlong quest to make the 2023 Final Four will begin. Staley is coming back. Most of her team is coming back. This season is over, but the next celebration weekend probably isn’t too far away.