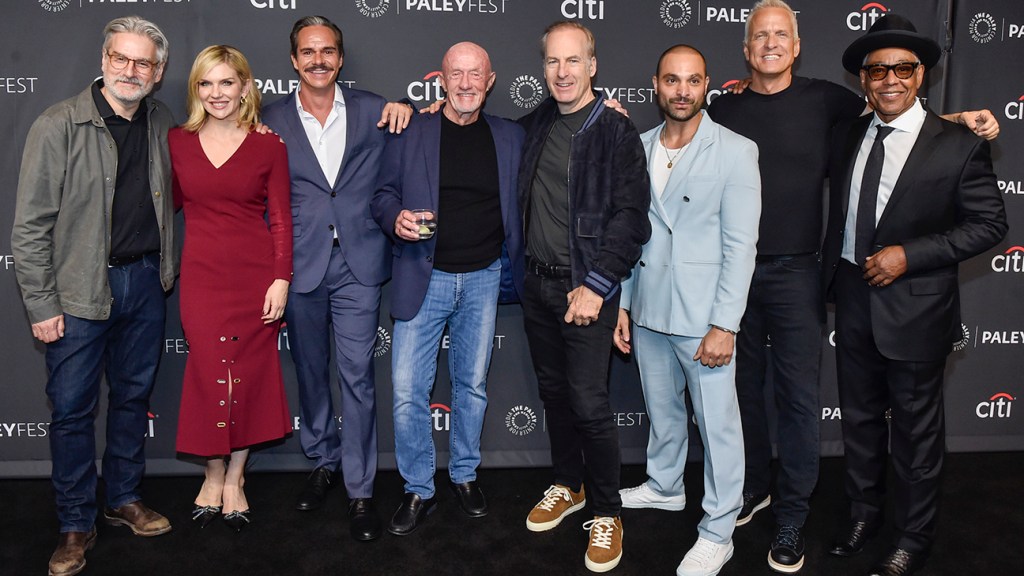 On Saturday night, Better Call Saul made its last appearance at annual Los Angeles TV showcase PaleyFest, as the AMC hit show is just days away from kicking off its sixth and final season. And for this closing run of episodes, star Bob Odenkirk had just one request: growth.

“I always wanted the character to grow and I campaigned for that over the years. My argument to [co-creator] Vince Gilligan was that sometimes people do learn the right lessons from trauma and challenge in life; they don’t always become Walter White,” Odenkirk told The Hollywood Reporter on the red carpet. “And I’m going to leave it to you to find out whether that is what happened.”

Better Call Saul, a prequel to Breaking Bad, has followed Odenkirk’s Jimmy McGill on his journey from small-time attorney to the powerful criminal lawyer known as Saul Goodman, who goes on to represent Bryan Cranston’s Walter White. And, as was revealed at the event, Cranston and Aaron Paul’s Jesse Pinkman will make a return at some point in the final season.

With so many years spent with Saul between the two shows, co-creator and showrunner Peter Gould said the finale’s mission was to figure out “what’s the right place to leave him, and I’m really excited about what we came up with. I love it and I hope everyone else does too.” And that decision on where to leave him was not planned out years in the making, but started coming together just last season.

“We had no idea how we were going to wrap it up until season five, and if you watch season five closely, later on you’ll see the clouds start to part during season five, and I wouldn’t say an ending but we had an image for where we could go,” Gould said. “As it worked out we came pretty close, but there were a lot of nuances that were very hard won this season.”

Of reading those final scripts, Rhea Seehorn confirmed, “I could not believe the weaving together of all of the storylines and the character stuff that they had to do, as Peter has said it was quite the Rubik’s Cube that he had to figure out. We were stunned. As a cast I think we found it alternately shocking and devastating and sometimes hilariously funny. It’s ultimately very, very thought provoking. I found it to be everything that I’d want as a fan.”

As for those last days on set, Odenkirk said the fact that they are not returning hasn’t fully hit him yet, while Gould recalls being “incredibly emotional” as he was directing the final episode on the day the series wrapped.

“We’ve been through near-death experience, deaths in the family, births, marriages, divorces — it’s been a ride with everything that can happen in human life just about,” Gould said. “Bit by bit the group is scattered to the four winds so it’s a very long, slow, painful goodbye to the group, but I like to think as many of us as possible are going to work together again. After Breaking Bad I thought I would never have an experience as rewarding, fun and creatively fertile as Breaking Bad, and this show for me has been just as good, for me maybe even a little bit better.”

Speaking of near-death experiences, Odenkirk famously had a heart attack last July while filming the series, which he and his co-stars — including Jonathan Banks, Giancarlo Esposito, Patrick Fabian, Tony Dalton and Michael Mando, and minus Gilligan — spoke about in greater detail during the PaleyFest panel.

He started off thanking fans for the outpouring of support online (“You treated me like I was a real angel, which blew my mind when I finally got my mind back”) and described how he doesn’t remember much of that time, saying, “It was about eight days, eight and a half days where I don’t have any memory. And then they kind of came back a little bit every day.”

Banks jumped in to declare, “Bobby was dead. Three times with the [defibrillator] paddles,” as Seehorn explained the moment from her view, when she and Fabian were 12 hours into filming with Odenkirk.

“Thank god he likes us enough that he didn’t go to his trailer because he wouldn’t be here. He was with us and watching a Cubs game and looked like he was going to pass out, looked like he was going to faint and we realized this thing was actually more wrong and started yelling for help,” she said, as a set medic, an A.D. with EMT training and a COVID-19 officer who was previously a war medic came to his aid. “Patrick and I held him and [producer] Melissa Bernstein called his family and they got oxygen to his brain immediately and they worked on him until he was back.”

Odenkirk said that the doctors cleared out the areas around his heart and he’s now “in better shape than I’ve been in for a while.”

“I know we rank on social media mostly as a place of evil, but in this moment, in this chapter of my life, it was a place of incredible warmth and love and support and I can’t believe it,” he added. “It blew my mind and it still does and that will resonate with me for the rest of my life.” And nine months later, he appeared to have taken a lighter approach to the experience; when asked to describe the final season in a few words, Odenkirk said, “Heart-stopping.”