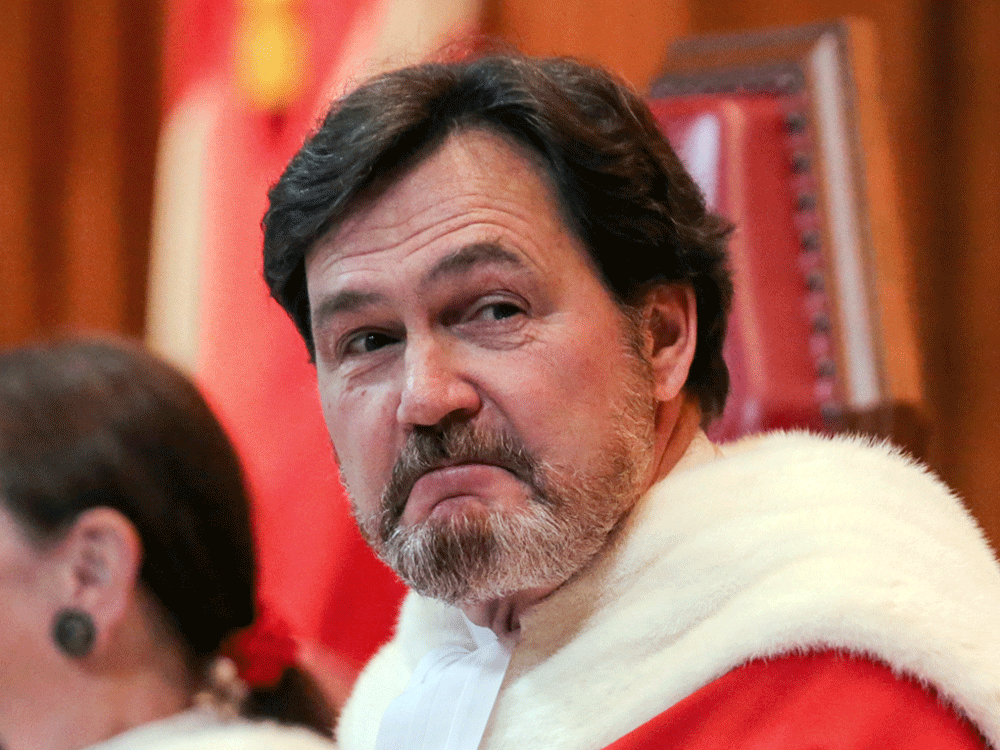 OTTAWA – Supreme Court Chief Justice Richard Wagner says he is still “enormously preoccupied” by access to justice issues that force 100 to 200 Canadians every year to be self-represented when applying to be heard by Canada’s top court.

Speaking to a group of students and alumni of his Montreal high school alma mater Collège Jean-de-Brébeuf Wednesday afternoon, Wagner strongly reiterated a point that he’s made numerous times since his appointment as chief justice: the country’s judicial system remains far too inaccessible to many Canadians.

But he went further than usual to illustrate the issue, noting that on any given year, between 25 per cent and 30 per cent of the 400 to 600 years applications for leave to appeal to the Supreme Court come from individuals who are not represented by lawyers.

“There is now better access to justice, but it remains an urgent issue,” Wagner told the audience. He said the number of unrepresented applications to the Supreme Court “shows there is a problem” of which he is “enormously preoccupied.”

He lamented that for years governments at all levels severely underfunded the justice system, meaning that today many people who can’t afford to pay for a lawyer are still considered “too rich” to qualify for legal aid.

We have a very, very serious system and there is no political partisanship

During the discussion, Wagner also warned that the “deplorable” politicization of the United States Supreme Court could also happen in Canada if Canadians and governments aren’t careful.

“With regards to the (U.S.) Supreme Court, I think its deplorable,” he said in response to a question from moderator and La Presse columnist Yves Boisvert about partisanship at the U.S. top court and the nomination process of the latest American supreme court nominee, Ketanji Brown Jackson.

“I don’t want us to talk about the Supreme Court like they do in the United States. We have a very, very serious system and there is no political partisanship,” he added.

Experts and U.S. politicians of all stripes have raised concerns about the “increasingly partisan” nature of American Supreme Court confirmation hearings, with some, such as Republican Senator Susan Collins, saying the “process is broken.”

Wagner said Wednesday he hopes Canada’s nomination process never gets close to what the U.S. one looks like currently.

“I hope we will never get to that point, but we have to think about it anyways because what seemed impossible a few years ago, well the last years have demonstrated that it is possible, even within a democracy,” he said, pointing to the Jan. 6, 2021, storming of the U.S. Capitol as well as the election of Donald Trump (which he referred to as “an individual,” without naming him).

Part of the tools to fight against an Americanization of Canada’s judicial nomination process and top court is improving Canadians’ access and understanding of the judicial system, Wagner insisted.

Since Wagner was nominated as chief justice in 2017, the Supreme Court held its first ever sitting outside of Ottawa (in Manitoba), began publishing plain-language summaries of rulings and began hosting virtual hearings (due to the COVID-19 pandemic).

“We want to communicate,” Wagner said. “I’m looking for all the tools possible for citizens to have access and know the justice system. It’s hard to appreciate something you do not know.”

“We want to make sure that people maintain their confidence in our justice system, so we don’t live what other citizens are going through outside of the country,” he added.

Wagner also shared a personal story about how his path to becoming Canada’s top judge actually went through the Gomery commission on the federal Sponsorship Scandal in the early 2000s.

Wagner told the audience that when judge John Gomery was appointed as head of the public inquiry into the federal government’s sponsorship program, his first choice for lead counsel was Wagner, then a lawyer specializing in criminal cases at a top Quebec firm.

Wagner said he initially accepted Gomery’s offer by phone and agreed to meet him in the afternoon on the same Friday. But he said he quickly realized there was potential for a conflict of interest because a colleague represented a client who would potentially be called to testify in front of the commission.

“I met the judge at 4:30 p.m. and told him, ‘Unfortunately, I have to decline because I have a conflict,’ ” Wagner recalled.

“No problem, you just have to quit your job at the firm and come with me to the commission. After that, we’ll figure out your career,” Gomery responded, Wagner said as the audience laughed.

After spending a “nightmare weekend” reflecting on the offer and his career, Wagner said he called the judge and said, “thanks, but no thanks.”

“But it made me think about how I was maybe due to change my career orientation, so I threw my name in the hat to become a Superior Court judge. And a few months later, I was nominated,” he said.