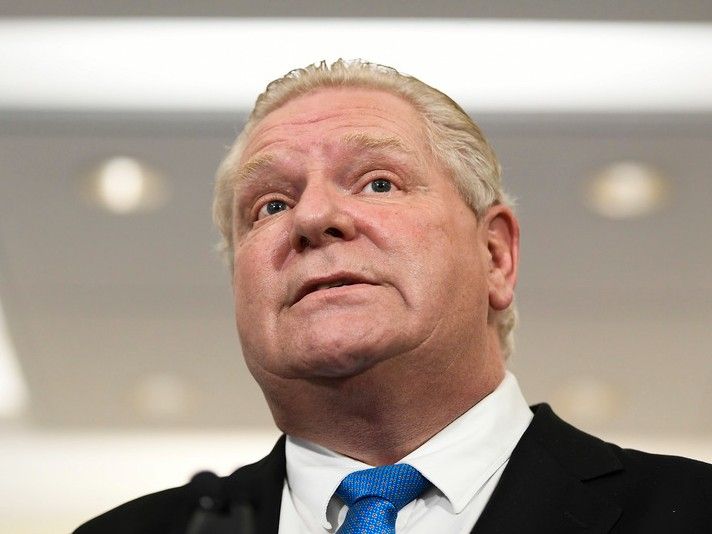 With the Ontario provincial election looming closer, it’s shaping into a good spring for the Doug Ford conservatives.

Results of a Leger/Postmedia poll show the Ontario PCs with a 14-point lead over the Liberals who are in a tight race with the NDP for second place.

Inflation and the skyrocketing cost-of-living appear to be the main concerns for voters as the pandemic ranks a distant third.

Thirty-nine per cent of decided voters say they’ll cast a ballot for the PCs later this spring, followed by 25 per cent for the Ontario Liberals, 24 per cent for the New Democrats, five per cent each for the Green Party and New Blue Party, with three per cent declaring allegiance to other parties.

That’s a two per cent jump for the Tories from January, but a one point drop for both the Liberals and NDP compared to similar polling earlier this year.

While the PCs continue strong at the polls, Leger’s Andrew Enns said that did not give the party licence to phone it in during the campaign.

“It’s becoming a little less stable,” he said, pointing to only 42 per cent of respondents saying their vote was final.

“That’s a little on the low side, which suggests to me that the campaign is still going to be an important one.”

Livianna Tossutti, associate political science professor at Brock University in St. Catharines, Ont., said the polling was certainly encouraging news for Ford — particularly his strong support in Toronto’s suburbs and in rural Ontario, and in spite of the continuing battle for second place.

“From the NDP perspective I would find it actually frustrating,” Tossutti said.

“(Party leader) Andrea Horwath is a well-known leader with favorability ratings that match Ford’s, yet vote intentions for her party are stuck right now, at least tied with the Liberals.”

Despite her party polling third, Horwath continues to wrestle with Ford as Ontario’s most-favoured party leader — with Leger ranking the two at equal approval ratings of 39 per cent.

Just 28 per cent of respondents reported a favourable impression of Liberal Leader Steven Del Duca — who Tossutti said continued to be haunted by a lack of name recognition. Del Duca sits eight points ahead of the Green Party’s Mike Schreiner.

One year ago, Ford commanded exactly half of the province’s favour, with Horwath at 40 per cent, Del Duca at 21 per cent and Schreiner at 20 per cent.

Horwath and Ford traded top spot twice over the past twelve months, but Horwath’s appeal among Ontarians did not seem to be enough to convince more people to vote NDP.

“It doesn’t seem to be a problem with her,” Tossutti said, adding that Horwath is reasonably well-regarded and isn’t as polarizing of a figure as the premier.

“The ideological orientations of Ontarians are essentially centrist and down the middle, so it’s a tough environment for the NDP in general.”

While voters seem split on which of the two leaders they like better, that parity doesn’t carry over to which leader Ontarians disapprove of.

Ford’s overall unfavourability ranks highest at 54 per cent, followed by Horwath at 43 per cent.

Del Duca and Schreiner were ranked 39 and 32 per cent respectively by respondents on the unfavorability factor.

Three per cent said they were unaware or knew little about Ford, a number that increases to 13 per cent for Horwath, 28 per cent for Del Duca, and 44 per cent for Schreiner.

The pandemic seems to be less of a concern for respondents who overwhelmingly ranked cost-of-living and the high price of housing as more important priorities for the government.

Just 44 per cent of those polled ranked economic recovery from COVID-19 as a top-five issue for party leaders, compared to 52 per cent for housing and 68 per cent preoccupied with increased costs of groceries and gas.

Tossutti said Ontario was experiencing an inflation rate of six per cent — one point higher than the national average.

“This has been a long-time coming in terms of inflation being the number one issue,” she said.

“Normally it’s the economy or health care or even climate change in more recent years that tops Ontarian’s minds.”

Ontario’s next provincial election must be held on or before June 2.

Of those who said their vote would not change between now and election day, 46 per cent reported it was their intention to vote PC; 45 per cent said NDP; 38 per cent said Liberal, and 31 per cent favour the Green Party.

The poll also suggests the recent ‘confidence and supply’ agreement between the federal Liberals and NDP would not have much impact on the upcoming provincial ballot — with most (55 per cent) saying the controversial non-coalition held no sway over their voting preferences.