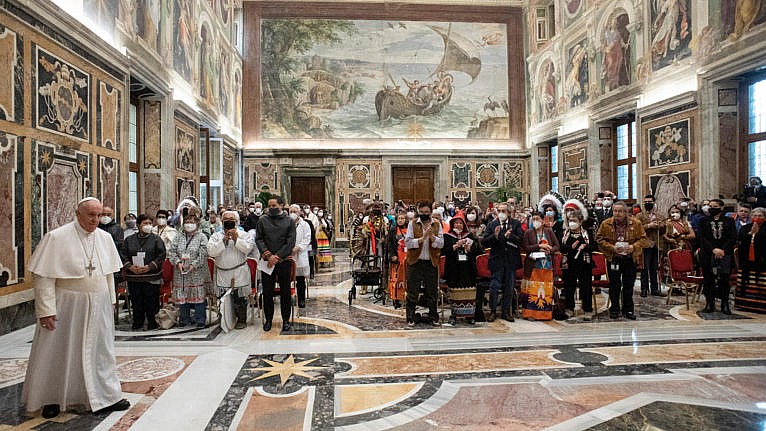 Politics Insider for April 1: First Nations delegates make progress at the Vatican; Trudeau pushes for a G19; and a Wildrose battle

First Nations delegates left a two-hour meeting at the Vatican Thursday saying they believe Pope Francis will soon apologize for the church’s role in the residential school system, CBC reports.

The 14 delegates from the Assembly of First Nations met privately with Pope Francis at the Apostolic Palace. During the meeting — originally scheduled for one hour — delegates said they could hear First Nations drumming and singing from St. Peter’s Square inside the room. While Pope Francis didn’t state clearly he would be issuing an apology, the words he used left delegates with a strong belief it will happen, said former Assembly of First Nations national chief Phil Fontaine. “We heard the Holy Father say very clearly, “The Church is with you,” Fontaine said.

On Friday, the Pope issued an official apology.

“I also feel shame … sorrow and shame for the role that a number of Catholics, particularly those with educational responsibilities, have had in all these things that wounded you, and the abuses you suffered and the lack of respect shown for your identity, your culture and even your spiritual values,” [Pope Francis] said.

“For the deplorable conduct of these members of the Catholic Church, I ask for God’s forgiveness and I want to say to you with all my heart, I am very sorry. And I join my brothers, the Canadian bishops, in asking your pardon.”

A generational fight: In the Globe, Tanya Talaga has an evocative column from Rome, conveying the sense of mission the delegates feel.

On Monday, the Métis delegation went rogue after their meeting with the Pontiff, the first of four private audiences. Instead of getting back on the idling church buses, they paraded through St. Peter’s Square, led by youth fiddlers. It was a sight to behold. Their red sashes swayed as they sashayed out of the Vatican. One elder even danced in her wheelchair.

Search blocked: CBC has a related story today, about federal officials blocking survivors organization from access to a key register in a search for 100-year-old records they hope could identify four children who died at residential schools in Sault Ste. Marie, Ont.

G19? Justin Trudeau said Thursday the G20 must re-evaluate the participation of Russia after the invasion of Ukraine, CBC reports:  “When it comes to Vladimir Putin sitting around that table with the rest of us, that’s going to be extraordinarily difficult for us and unproductive for the G20.”

Meritorious? Trudeau wouldn’t say Thursday whether he thinks retired Gen. Jonathan Vance should get to keep the prestigious Order of Military Merit after pleading guilty to obstruction of justice, Global reports: “Obviously I’m not going to comment on an ongoing court case. We’ve been very, very clear that at the centre of what we need to do is support the men and women of the Canadian military.” Membership in the order carries material benefits for those deemed to have made “outstanding meritorious service and demonstrated leadership in duties of great responsibility.”

Sabrina Maddeaux has a powerful column in the Post on the Vance case, arguing persuasively that the justice system let down women by handling the case as it did, so that he pleads to a single count and avoids jail.

Vance is not someone who immediately admitted and apologized for his actions. He’s someone who attempted, on multiple occasions, to cover up his behaviour and pressure his own accuser into complicity. He lied to journalists and the Canadian public. This pattern of behaviour hardly reconciles with a man of supposed “good character” and certainly doesn’t make a case for leniency.

Misinfo: Misinformed Canadians have sent tens of thousands of calls, emails and handwritten letters urging senators to oppose a pending Senate bill under the mistaken belief that it would take away their pensions and lead to some sort of totalitarian world government, CBC reports.

The bill would not make any changes to existing government programs and does not stipulate who would qualify if the government were to implement a basic income scheme. Some of the concern about pensions and income support seems to stem from a tweet by Peter Taras, a former Ontario candidate for the People’s Party of Canada. He told his followers that, if Bill S-233 passes, “if you are not vaccinated you will not receive EI, CPP, OHS, Social Services or Pension that YOU PAID INTO.”

Dirty tricks: The CPC says it’s confident data about its members has not been compromised after an alleged breach affected Jean Charest’s leadership campaign, CP reports. A spokeswoman for Charest says the campaign determined someone had used their website to make false pledges using IP addresses from Ukraine, “an obvious attempt to create chaos.” The Star has more details.

By any other name: The news that Danielle Smith intends to return to politics to seek the job currently held by Jason Kenney means that there could be two former Wild Rose leaders awaiting a vacancy after Kenney’s leadership review, Don Braid points out in the Calgary Herald, which might not be great for the party.

Some UCP members and local leaders wonder how the party gets past the endless turmoil. They worry that rebooting old political careers and histories will only prolong the agony and hand the NDP another victory. There’s a growing appetite for new faces, none at all for familiar grudges.

Social spending: In 2021 the Canadian government spent more than $600,000 to social media influencers to promote federal initiative, according to a CTV News analysis. CTV reports that more than a dozen federal departments and agencies employed influencers to help get their messages out in the last year.