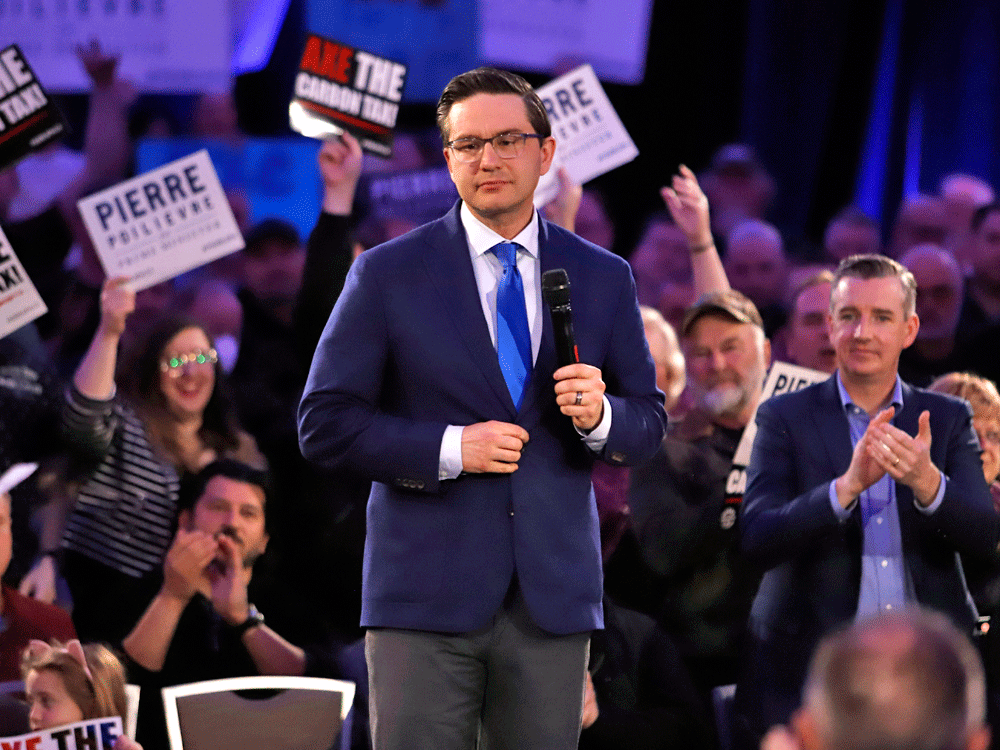 Conservative Party leadership hopeful Pierre Poilievre drew hundreds of supporters at his “Axe the Carbon Tax” rally in Ottawa, mere hours away from the criticized hike that will make carbon cost $50 a tonne and add some extra cents at the gas pump.

To the sound of Neil Young’s “Rockin’ in the Free World” playing, former leader Andrew Scheer made his entrance to present his fellow MP and friend – they were both elected for the first time in 2004 – and to make some not-so-subtle digs at his successor Erin O’Toole.

But most importantly, he said, leadership races are about trust.

The lack of trust is one of the reasons why O’Toole was ousted two months ago by a majority of his caucus, frustrated that they had not been consulted on the change of position on the carbon pricing policy. O’Toole had claimed his proposal was not a tax, but had all the hallmarks of one.

Poilievre’s intentions could not have been clearer on Thursday evening.

“In mere hours, the clock will run out and Trudeau’s tax hike will take effect at our gas pumps, on your heat and, indirectly, on your food and essentials of your life. As if we don’t have enough problems already, he decides he’s going to raise the costs even further,” he told them.

“That is why I’m announcing today that a government led by Prime Minister Poilievre will axe the carbon tax,” he reiterated to the excited and cheering crowd who was holding posters with that same, exact message on them.

Poilievre added he would replace the Liberals’ carbon pricing by other measures, which include reviving Scheer’s bill to ban the dumping of raw sewage into water, reducing emissions with carbon capturing and nuclear power, as well as exporting Canada’s “green energy to the world.”

He also blasted his opponents Jean Charest for having implemented a cap and trade system in Quebec when premier, as well as Patrick Brown, for having opposed a carbon tax before changing his mind when he became leader of the Ontario Progressive Conservatives.

Both Charest and Brown have called on the Liberal government to cancel its carbon tax increase on April 1st.

Poilievre, who has been campaigning for nearly two months now, went on to repeat some of his recent promises such as banning imports of oil from “dirty dictators,” unleashing the power of cryptocurrency, keeping inflation low and getting rid of the Canada Infrastructure Bank.

But the promise that drew the most roaring applause from the crowd was Poilievre’s promise to defund CBC.

“The room doesn’t seem undecided on that, does it?” he chuckled.

Supporters and volunteers met by the National Post on Thursday were not afraid to say that the perspective of having Poilievre as leader of the party and possibly as Prime Minister is very exciting, to say the least.

“I really admire somebody who’s willing to stand up for what they believe in and have the arguments to fight back as to why they have those beliefs and why they shouldn’t be shamed into not having those beliefs,” said Michelle Lapointe, a volunteer for Poilievre since 2021.

“He just… he impresses the hell out of me all the time.”

Peter Morel campaigned for O’Toole in 2020 and was caught by surprise when the former leader lost his confidence vote, but Morel was happily signing up new members for Poilievre at the entrance of the convention centre in Ottawa on Thursday night.

“Pierre is definitely the man. His policies are fantastic. He’s an excellent speaker. And as you probably know, he’s a very, very smart person.”

“I’m pretty excited because he stands up for, I believe, Canadians,” said Matt Baron, a longtime Conservative voter. “Everybody I talk to feels the same way.”

Weeks after the end of the trucker convoy that paralyzed Ottawa, Poilievre is aiming to channel the anger and frustration felt by Canadians into signing up new memberships that he hopes will make him the next leader of the Conservative Party of Canada.

To the supporters in the room, he promised to do “exactly the opposite” of Prime Minister Justin Trudeau and look upon “every Canadian with a spirit of freedom and equality, regardless of race, sexuality, gender, vaccination status or any other characteristic”.

“No more divide and conquer. Instead, unite for freedom!”