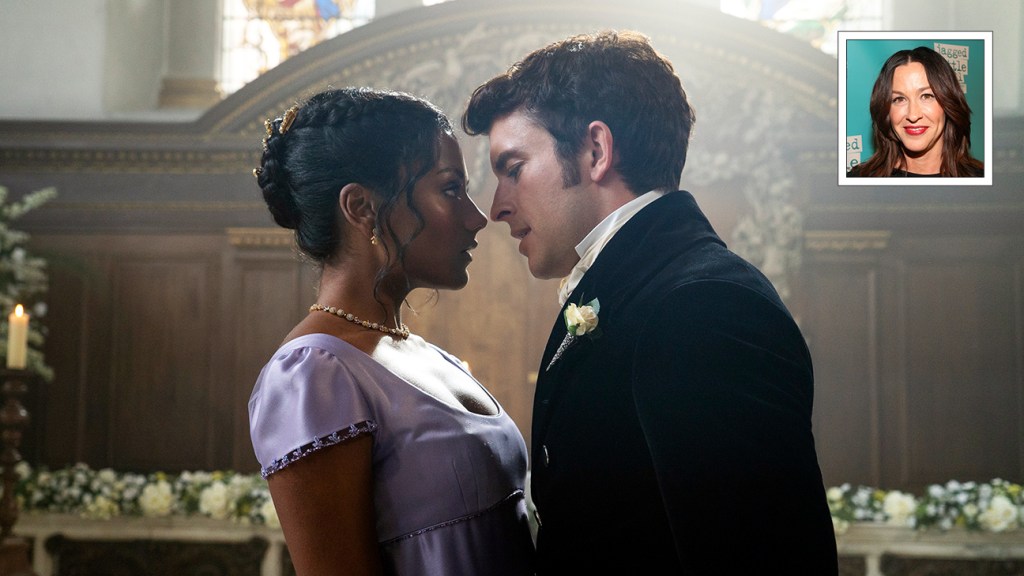 Alanis Morissette has added her signature voice and lyrics to Bridgerton season two’s regency romance cover of “You Oughta Know.”

On Friday, Netflix released a special performance of Morissette backed by the musical group Duomo & Kroma Strings. The video features footage of the musicians performing the song under a starry and petaled canopy alongside clips of the second season’s leading couple Viscount Anthony Bridgerton (Jonathan Bailey) and Kathani “Kate” Sharma (Simone Ashley).

The lead single from her third studio album, Jagged Little Pill, “You Oughta Know” is famous for its edgier rock sound, a departure from Morissette’s earlier pop music, and for its biting lyrics, the words of a scorned woman to a former lover. Co-written by Morisette and Glen Ballard, the iconic original track features guitarist Dave Navarro and Red Hot Chili Peppers bassist Flea.

For the Bridgerton cover, which was arranged by Duomo & Tomás Peire-Serrate, the lyrics are stripped when the music makes its appearance in episode five, “An Unthinkable Fate,” during a sequence that centers a rather longing and breathy Viscount and Sharma.

Still, music supervisor Justin Kamps told TODAY that lyrics, along with the feelings of a character and the emotion of a scene, are a pivotal part of selecting pop covers for Bridgerton. “If you read the lyrics, and you think about what’s happening in this scene, you’re like, ‘OK, I get it,’” Kamps explained.

In the same interview, composer Kris Bowers described the show’s sound as something that “has a modernity to it that is very much inspired by pop music in terms of how it feels rhythmically and harmonically and melodically at times, but it’s all rooted in the rich orchestration of that time period.”

Bridgeton’s music is known for its emotionally enveloping classical arrangements. Along with “You Oughta Know,” season two’s soundtrack also features covers of Pink’s “What About Us,” Harry Styles “Sign of the Times,” Rihanna’s “Diamonds” and Miley Cyrus’ “Wrecking Ball.”