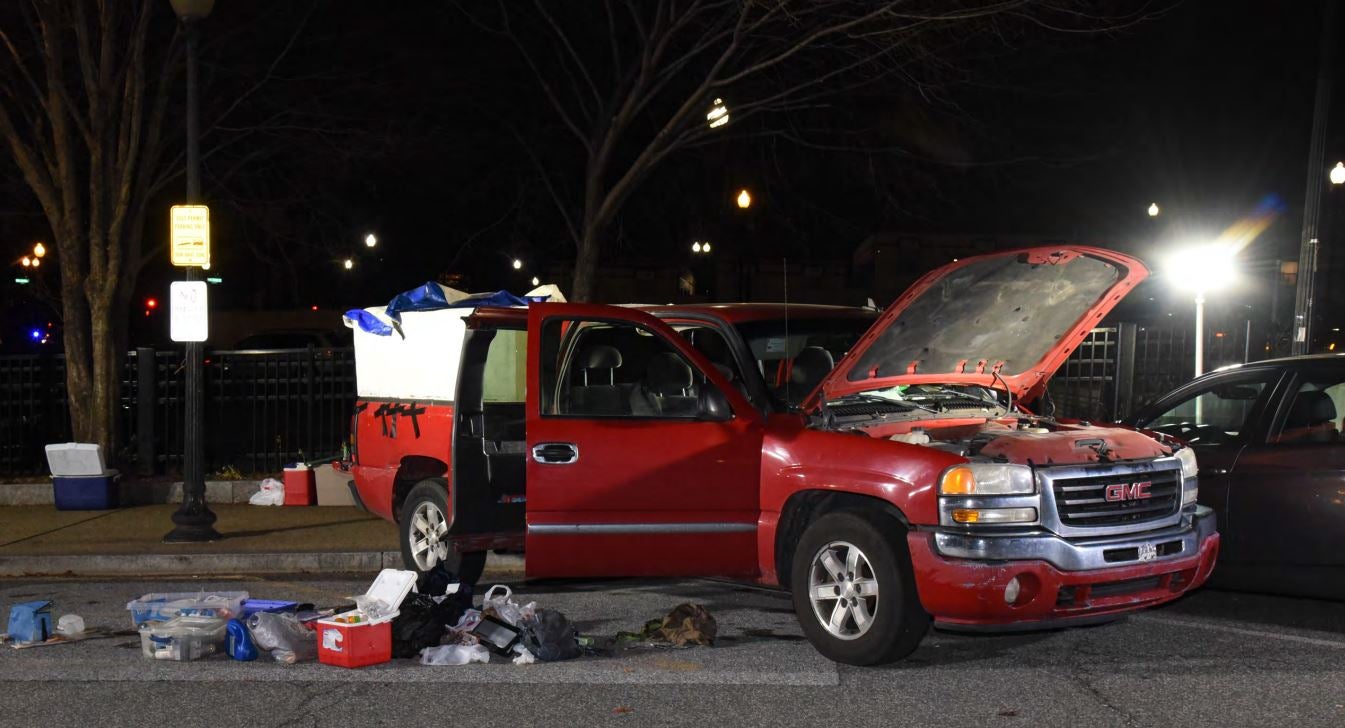 (AP/WISH) — An Alabama man who parked a pickup truck filled with weapons and Molotov cocktail components near the U.S. Capitol on the day of last year’s riot was sentenced Friday to nearly four years in prison.

Lonnie Leroy Coffman had listed an Indianapolis congressman as one of the “bad guys” to seek out as he took part in the riot.

U.S. District Judge Colleen Kollar-Kotelly said she still hasn’t heard an explanation for why Coffman had “almost a small armory in his truck, ready to do battle.” She sentenced Coffman to three years and 10 months in prison, giving him credit for the more than one year he already has served since his arrest.

Coffman, 72, of Falkville, Alabama, said he never intended to hurt anybody or destroy any property. He said he drove to Washington alone “to try to discover just how true and secure was the (2020 presidential) election.”

“If I had any idea that things would turn out like they did, I would have stayed home,” he wrote in a handwritten letter to the judge.

More than 770 people have been charged with federal crimes related to the Capitol riot, when supporters of outgoing President Donald Trump stormed the building in an effort to disrupt lawmakers’ formal certification of his reelection defeat. Five people died and scores of Capitol Police officers were seriously injured.

Over 240 participants in the attack have pleaded guilty, mostly to misdemeanors punishable by a maximum of six months imprisonment. More than 130 have been sentenced. Coffman is one of nine defendants whose prison sentence exceeds one year.

Coffman, a Vietnam War veteran who served in the U.S. Army, pleaded guilty in November to possession of an unregistered firearm and carrying a pistol without a license. He was carrying a loaded handgun and revolver without a license as he walked in Washington, D.C., on Jan. 6, 2021, according to prosecutors. He isn’t accused of entering the Capitol or joining the mob during the riot that day.

When Coffman parked his truck a few blocks from the Capitol on the morning of Jan. 6, it contained a handgun, a rifle, a shotgun, hundreds of rounds of ammunition, a crossbow, machetes, a stun gun and a cooler containing eleven mason jars with holes punched in the lids, according to prosecutors. Each jar contained a mixture of gasoline and Styrofoam, which are components of the homemade incendiary devices called Molotov cocktails, prosecutors said.

Law enforcement officers found the cache of weapons and ammunition when they searched Coffman’s truck. They had been sweeping the area after pipe bombs were found near the headquarters of the Republican National Committee and Democratic National Committee. Later, investigators also found Molotov cocktail components at Coffman’s home in Alabama.

“Possession of so much dangerous weapons in our nation’s capital is uniquely offensive to our cherished, democratic political traditions,” Assistant U.S. Attorney Michael Friedman said.

The notes included a list of “good guys” and “bad guys,” with a federal judge named in the latter category, and contact information for a member of a Texas militia group known as the “American Patriots,” prosecutors said.

“The handwritten notes also included an address for a reported gathering place in Texas called ‘Camp Lonestar,’ where militia groups had reportedly sought to patrol the border looking for illegal aliens,” prosecutors wrote.

U.S. Rep. Andre Carson, an Indianapolis Democrat, was one of the people on the list. Next to Carson’s name on the list, it read, “(One of Two muslims (sic.) in House of Reps).”

Carson said in January 2021 in a statement to News 8, “It is extremely disturbing to learn from press reports that I was one of several individuals identified in a list of ‘good guys’ and ‘bad guys’ targeted for attacks.”

Investigators had previously identified Coffman as an armed participant at Camp Lonestar, according to prosecutors.

Coffman, a retired machine operator, had travelled to Washington in December 2020 and tried to drive to the home of a U.S. senator who isn’t named in a court filing by prosecutors. He also called the senator’s office in an effort to “help with the election fraud he saw.”

“A staff member at the Senator’s office recorded that the defendant seemed ‘unbalanced’ or ‘not 100% there’ during the call, but did not seem threatening,” prosecutors wrote.

Coffman didn’t have a criminal record before this case.

“At my age, one of the most precious (things) we possess is time, and I have wasted almost a whole precious year,” he wrote in his letter to the judge.